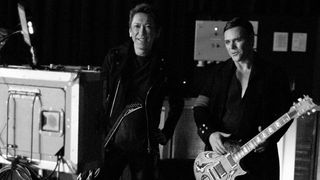 We’re in a pitch-black warehouse, on an industrial estate somewhere in Berlin, where Rammstein guitarist Richard Kruspe and Japanese legend Hotei have teamed up to record the video for their new song, Move It.

After the legends strapped on their guitars and rocked out as if they were performing for an audience of millions, we sat down for a chat about the collaboration.

Richard: “First of all, I think that any kind of collaboration that tries to put you out of your comfort zone is always a good thing. Because a lot of the time, especially with musicians, you stick mostly in the world that you’re in, and sometimes you’re scared to do this kind of work because it brings you into a situation where you think, ‘Oh my god, what am I doing here?’ And especially asking me to sing, I’m on a very new track in my life, so it was a challenge for me to do so. I think it’s great. There’s a lot of things I don’t like about the music industry right now, but this is something I like, that people actually collaborate and are open for that.”

Richard, did you have any nerves going in?

Richard: “I really pushed myself to get out of my comfort zone, because I always knew something good would happen. If it doesn’t, you can say, ‘Well, it didn’t work out.’ But I think it’s important for us to go that way and try to do something different. I was scared, but I thought, ‘You know what? Let’s try – no guts, no glory.‘”

When did you guys first meet?

Hotei: “Last night. I felt like we’d known each other a long time – ‘Hey, Richard, finally.‘”

Richard: “We’re pretty much open and easy-going. I did so many collaborations, and I never met someone that I did a collaboration with and didn’t like. I think that music’s all about feelings anyway, and I think those things happen really naturally. I don’t know what it would be like spending four weeks in one room, with a crying baby, that would be a different story! But we’re coming from a culture that’s really respectful and kind.”

Richard: “We get to be number two in France! Haha!”

What do you think of each other’s styles?

Hotei: “I think we are kind of similar. He has more muscle…”

Richard: “Well he’s faster, that’s for sure. I was listening to his stuff, and I was like, ‘Huh, that’s quite fast!’ so I turned it down to 50% and tried to play, and even that was too fast for me. I wouldn’t have a chance in the Wild West.”

Hotei: “Both guitars sound very sharp and edgy. That’s why I like his guitars.”

Richard: “I’m more the foundation of the guitar part, where he flies with his tone over the clouds.”

Do you think you’ve learned anything from each other?

Richard: “You always learn. You try to be open, especially to how people write in a certain way. We always can… what’s the right word, participate from each other in a way. For me, it’s always interesting.”

Are you ever going to sing on Rammstein records, Richard?

Richard: “I think Till would have a problem with that! You know what? I’ve found my peace by doing Emigrate just to do vocals, and I think Rammstein is pretty much in good hands with him, so there’s no need for that. People would get confused!”

Strangers is available now from iTunes.