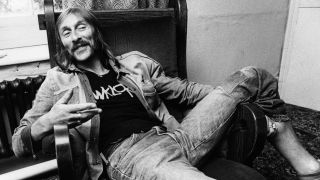 Space-rock elder statesman Dave Brock may have swapped Hawkwind’s Ladbroke Grove crucible for the agrarian charms of rural Devon, but the 71-year-old shows little sign of settling into a completely quiet life.

He has time for reflection; to potter about his farm, quite literally mending fences. But while there’s a studio in the barn and a cosmos full of sonic possibilities to explore, retirement is simply not an option.

“Could do well if tried harder.” School was alright, but such a long time ago. I wasn’t bad. Our old art teacher, a Mr Dyson, used to play banjo in a jazz band, and me and a friend of mine got interested in jazz through him, because he was telling us about New Orleans jazz musicians and all that, so perhaps he made us get a bit more involved in music.”

**You were a busker pre-Hawkwind. Was that life as romantic as it might seem? **

No, not at all. It was a hard old life. Playing in the streets, you’d put up with a lot of crap from people, and with a lot of nasty people around, you’ve got to stick up for yourself, especially in the evening when you get loads of drunks coming out of pubs. We played along the south coast of France in cafes, but I was sleeping on the beach in my sleeping bag, so that wasn’t very romantic.

You live on a farm these days. Do you grow your own vegetables?

We used to, years ago. We’ve had sheep, goats, cattle and so on, and you become a custodian, really. That’s what a lot of farmers are – they’re custodians of the land. Looking after the animals, you get attached to them, and after that you have to sometimes kill them. It gives you a different outlook on life, having to kill creatures. It’s quite sad sometimes.

We have quite a laugh about this in the band because of my “If I was in charge there would be a lot of changes made in the world” attitude. I can see a lot of terrible things occurring because of wars. We live in a society that’s constantly embattled. And unfortunately, there’s too many people on the earth, and there’s corruption in high places. Then you get on to the problems with too many people in one country, and immigrants and that whole sort of thing. It’s a very difficult one.

When was the last time you went for a drink with Lemmy?

Only last week, funnily enough. I went to see him at Bristol, so I sat in his dressing room for quite a while and had a long talk with him.

He doesn’t change, does he?

Well, you get used to that lifestyle, travelling on the road and playing music. It’s a strange old existence, sometimes. I’ve diversified and away from that. It’s a bit different, pottering around here doing a bit of fencing. But I can’t do a lot of the things I used to do. I was cutting a few boughs off trees the other day and I felt all dizzy after doing that. You don’t see it coming and it’s really frustrating. Your brain’s willing to do. it, but when you start doing a lot, you start to feel a bit dizzy.

Can you remember exactly how many people have been in Hawkwind?

I honestly don’t know. Quite a lot! People go off and do other things and then they come back in again. I always regard it like we’re a ship, and different people get off at different ports, and then the ship pulls in a year later and it’s like, “Come aboard, old chap.”

Would you want Dave Brock as a boss?

What are you most proud of?

Looking after my mum and dad, I suppose. My dad lived to 100 and my mum to 94 and we looked after them for about the last 15 years of their lives. If more people looked after their parents a bit more, the world would be a better place. Traditional families only seem to still exist in third- world countries, because they still respect the wider family unit – the aunties and uncles, the mums and dads. We’re living in a time and place where there are a lot of single parents. And bringing a kid up that hasn’t got a good home, two parents and aunties and uncles around them… it makes a lot of difference to their lives.

What’s the secret of your success?

I don’t think that I am successful. If I was I’d be a lot richer than I am, and I wouldn’t be living on a damp bloody farm – I’d be living somewhere warm.

I suppose I’d like to be acclaimed as a great musician, and an influence on what I was involved with, which is in a way what we achieved. I love jazz music; lovely catchy melody lines that you can sing along to even though the guy’s been dead for 60 years. It’s something to be treasured.

For more on Hawkwind and the band’s best songs according to Dave Wyndorf from Monster Magnet, then click on the link below.