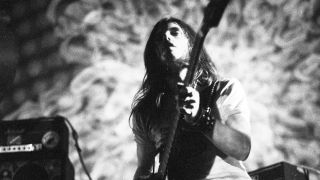 Hawkwind leader Dave Brock recalls Lemmy’s acrimonious split from the band – which led to the formation of Motorhead.

Lemmy was in his mid-twenties when he joined Hawkwind in 1971. Being in a band with him was never dull. We were young and Hawkwind was an eccentric band, so he fitted in with us really well.

He had been a friend of Dik Mik, our keyboard player. Resentment was building up with [bassist] Dave Anderson, who was driving around in a sports car while we were sleeping in the back of the band’s van. So when Dik Mik put Lemmy forward we gave it a go, even though Lemmy had never played bass before.

Because of that, Lemmy played bass like a guitarist and it gave him a style that was all his own. It was the same with those gruff vocals of his. Nobody sang like him. I wasn’t a great lead guitarist, and our styles gelled very well. And as he came up with The Watcher and Motorhead pretty soon we realised that he was also a really good songwriter.

That whole era – Space Ritual, in 1973 – was an incredible time, though you don’t realise these things until many years later. I wish I’d appreciated it more as it was happening, but then again I was pretty stoned for most of the time.

Once when we played at the Roundhouse, somebody spiked up the whole band, and when the time came we had to tell our road manager: ‘We can’t possibly go on yet’.

I used to share a room with Lemmy on tour, which was quite an experience because he would be up for days on end.

I once saw him fall asleep with his eyes open while reading a book. Trying to wake him up became a major problem, especially if there was a bus or a flight to catch. When you’re in a band, little problems like that can grow into bigger ones.

Part of the growing divide was that Lemmy took downers and speed, while the rest of us were into LSD. I remember when we took some organic mescaline together at a festival in Cambridge. We sat by the river and everything became crystallised. As we watched a crystal water rat swimming in the crystal river, we heard an announcer asking for Lemmy and Dave Brock to come to the stage. Lem looked at me and said: “I think we’d better stay here just a bit longer.”

But the molehill of sitting around and waiting for Lemmy eventually became a bit of a mountain, it really pissed people off. Things came to a head when he got pulled at the Canadian border in 1975. Douglas Smith, our manager, had warned us to make sure there were no drugs. But Lemmy was a bit befuddled and had a tiny packet of speed on him. They mistook it for cocaine and he got thrown into jail.

So with everyone believing he might be in prison for a year or more, there was a big band meeting. He was voted out by two to four. Simon House and I had wanted to keep him but the rest disagreed. Nik Turner even said that either Lemmy left or he would.

It fell to me to break the bad news. He was really upset, there were hugs and tears and he went back to England. Apparently he slept with several of the band’s girlfriends… who knows whether or not that’s true.

But even after the sacking I never fell out with Lemmy. It was the other members of Hawkwind that he hated. He was going to be the best man at my wedding in 2007 until problems with his heart hospitalised him. That was almost 10 years ago; it makes you realise he’d been ill for quite a while.

We would often exchange phone calls and texts. I’d tell him: “It’s time for your pipe and slippers now, you silly old c**t”. And he’d reply: “Bollocks!!” with exclamation marks. I’d say he had to visit us here in Devon before he finally conked out, and he’d say that it was a great idea, but it never happened.

It’s great that he made it to 70. I never thought he’d make it to 50. We did have that difficult conversation about slowing down. In fact I sent him a text saying: “A live legend, a dead hero”. Flying around the world and the stress of playing concerts isn’t good for your body, but I don’t think he paid it too much attention. The old c**t had said he wanted to die on stage, and that’s very nearly what he did. But there was always magic between us, and I’m so grateful that he was in my life.

Remembering Lemmy: The Musician (No.2) – Danny B Harvey (Headcat)

Everyone in the metal world knows that Lemmy’s really good, which maybe not everyone else appreciates. But he was so good on so many levels. We did those Buddy Holly songs on the first record, and he knew all the harmonies; he’d sing in perfect pitch. When I put slap-bass in to make it a bit rockier, which there wasn’t on the original, Lemmy would say: “That’s not how the bass part goes! Make it the way it was supposed to be!”

He was a geek about all music though. Back in the early days, whenever I was in town I’d hang at his house and we’d play records – the first Beatles albums, Chuck Berry, Little Richard… But he’d also play bands from the 70s. He had his records all stacked up, he’d say: “Have you heard this?” He’d know exactly where any CD was, and he’d put it on and know what track to go to straight away. His memory retention was incredible.

Backstage at Headcat shows, we’d be talking and listening to records – he told us stories and did impressions of comedians. He’d do Derek And Clive and the Peter Sellers stuff… All word for word. It was a lot of fun.

I first met Lemmy in the 80s when I was working for Ozzy Osbourne. We all used to go out down the Marquee a lot, play on the fruit machines – in the Embassy Club there were £200 fruit machines, and Lemmy would be on one and I’d be on the other. But I didn’t know him that well. Then I got a call in about 1995 asking if we wanted to do Motörhead.

One of the first things I had to clear up with Lemmy – before I represented him – was the fact that he was a huge Nazi memorabilia collector. And my surname’s Jewish… So I said: “Look, I wouldn’t be here if Hitler had won the war, and I really need to feel okay about you being into this Nazi memorabilia stuff.” He launched into one of the most intelligent, insightful discussions of his fascination with the artwork. He said he absolutely in no way endorsed the politics and idealism behind it. It was purely that sometimes the most evil regimes come up with the best artwork. There were so many times when he amazed me with his insight into politics and religion.

I’ll remember him as a towering storm of a character – a real character. The way he defied the forces of nature was unbelievable, and I loved him for it.