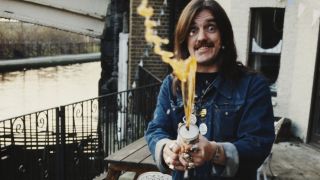 As much as many of us regarded Ian ‘Lemmy’ Kilmister as an indestructible titan and standard bearer for our world and its deafening values, the horrible reality that all great things must come to an end is slowly sinking in. How do you replace the irreplaceable? You don’t. You just thank your lucky stars that you were alive at the right time and able to experience some of Lemmy’s effervescent rock’n’roll magic first hand.

I bought my first Motörhead record when I was 12 years old. It was the No Remorse double album compilation – black sleeve, no fucking about, all the hits and more – and it blew my mind. Motörhead weren’t the only band that set me on the path towards an obsession with fast, loud and heavy music, but they were as important as any other: perhaps more than most, because the music that Lemmy wrote and performed was so raw, honest, unapologetic and downright fucking exciting that virtually everything else seemed anaemic and half-hearted by comparison.

Everyone knows Ace Of Spades, but reducing the great man’s legacy to that three-minute eruption of liberated joy – as timeless and unassailable as it will always remain – would be to do him a great disservice. Lemmy’s musical legacy is vast and all-conquering. Without him, the heavy metal landscape would look entirely different – and far less interesting – and rock’n’roll would never have had its most tireless, eloquent and admirable figurehead.

He was a no-holds barred punk rocker to his fingertips: an inveterate rebel who realised, as so few rock stars seem to do, that being a rebel wasn’t about posturing or pretence, it was about being yourself to the absolute maximum, living life the way you wanted to and never taking your feet off the accelerator. That Lemmy managed more than 50 years of maximum rock’n’roll living without being an arsehole or another tragic casualty says it all. He was the real thing – the living embodiment of everything the world of balls-out heavy music stands for. Never mind his reputation as a diehard speed-freak and bourbon sponge: Lemmy was a musician first and foremost, and one that dedicated his life to entertaining himself and all like-minded people with music that screamed defiance in the face of conformity, ignorance, laziness and, yes, even mortality itself.

Of course, Lemmy would absolutely hate most of the dewy-eyed froth that will be penned in his name today and over the next few days. He never asked to be anyone’s hero. All he asked was that people lived their lives without fear (and, it hardly needs adding, with impaired hearing – perhaps to enable us to hear a bit less bullshit along the way). The real tragedy of Lemmy’s passing is for his family and friends to process in privacy, but for those of us that love Motörhead and that have benefitted so much from this grizzled force of nature and his devotion to rock’n’roll, the loss of one of the few people that genuinely walked it like they talked it and never compromised… well, there is a gaping hole in the fabric of our world today and it will remain that way until the end of time. As his most famous song declared, Lemmy didn’t want to live forever. But he will.

Born to lose, live to win. If it’s too loud, you’re a cunt. He was Lemmy and he played rock’n’roll. Let’s honour his memory by never turning the music down. Turn it up. Turn it up some more. Rest in peace? Fuck that. Rest in ear-wrenching, tooth-rattling, speaker-bursting glory, Lemmy. We will never forget you.

The 10 best Motörhead songs that aren't Ace Of Spades

Lemmy: In His Own Words

The Old Man And The Sea: All Aboard The Motorhead Motorboat