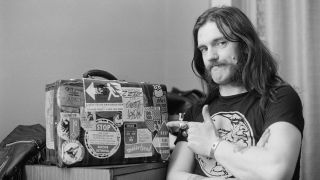 Lemmy passed away on December 28 2015, after succumbing to an aggressive form of cancer. He was 70 years old.

As the rock world mourns the loss of the redoubtable frontman, here are some words of wisdom from the one rock legend who was always worth listening to…

“I come from a broken home. I broke it.”

“All I learned at school was how to dodge fighting, and how to smoke. And what girls’ tits looked like.”

“I like to be loud and shout and run around. Rock ‘n’ roll should be Saturday night every night.”

“I like girls. That’s the only reason I’m in the music business – I discovered you could get women to take their clothes off if you had a guitar. And they come off a lot faster if you can play it.”

“My ethic is: ‘Eat, drink and be merry, for tomorrow we die.’ You can be as careful as you want, but you’re going to die anyway, so why not have fun?”

“I know, intellectually, there was a time when I wasn’t in Motörhead. But I can’t actually remember it.”

“I get to travel all over the world, I get to sleep with women of all colours and religious persuasions and I get to play the music I like and make people happier than they were when I arrived. It’s a good way to make a living. You find me a better one.”

“I’ve got what’s called a Low Tonal Register, which, loosely translated, means I sound like a gorilla on Valium.”

“Motörhead are supposed to make people wonder what’s the next bad thing that will happen to them. Life is about brief periods of bliss, followed by long periods of depression, angst and brutality.”

“It’s not that I take pride in being unfashionable. It’s just that I’ve gotten used to it. I do it rather well now. I’ve been practising for a long time.”

“I don’t get hangovers. You have to stop drinking to get a hangover. Why stop?”

“I don’t agree with any politician. I think they’re all c–ts.”

“I was Jimi Hendrix’s roadie. My rock’n’roll credentials are fucking impeccable.”

“Integrity is everything to me. I will not die ashamed. I will live on my deathbed knowing that I gave it my best shot, and everything else is meaningless to me.”

“If there is a God he hasn’t been paying attention. He should retire and hand over to a younger man, because he’s making a real bollocks of everything.”

“I only care about my band. All the rest of you can go fuck yourselves.”

“Most people get to clock out at the end of their day’s work. I’m Lemmy twenty four hours a day, seven days a week.”