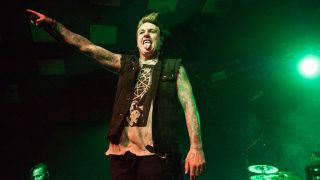 It’s fair to say that gig season is back in full swing with Team Hammer already suffering the effects of high volume and high alcohol intake. But that won’t stop us doing it all again over the next seven days: here’s what’s going on!

Dropkick Murphys: Glasgow, Barrowland Ballroom, Wednesday 18th March There are very few bands that offer the sort of guaranteed drunken good times as Dropkick Murphys. Their Celtic-inspired punk is pretty much the definition of rabble rousing, and are probably the most badass band that contain banjo, accordion and harmonica players. The likes of I’m Shipping Off To Boston and Going Out In Style provide the perfect antidote to dull-as-fuck folk like Mumford & Sons.

Wednesday 13: Cardiff, The Globe, Wednesday 18th March The Frankenstein Drag Queens From Planet 13/Murderdolls frontman and conspiracy theory enthusiast (which you can read more about in the latest issue of Hammer) hits Cardiff on his solo tour this week. Backed by a blood-splattered back-catalogue of bangers, expect songs from his solo projects and the various other projects he’s added his distinct dark humour to over the years.

Amaranthe: Manchester, Academy 3, Friday 20th March Proving there’s more to Switzerland than chocolate, cheese and those little knives, and that’s there’s more to Denmark than, erm… bacon, Amaranthe are one of the more original power metal bands the genre has thrown up. Blending an array of styles into the mix while their three vocalists each tackle a different aspect – Henrik Englund taking care of metal, Jake E having a more traditional rock tone, while Elize even trades in pop.

IT’S THE FINAL COUNT DOWN!!! DU, DU, DU DUUUHHHH! You know how it goes and if that doesn’t get you pumped-up on a Thursday then we don’t know what will. If you do need further convincing though, we can assure you that Europe have plenty of other crackers in their back catalogue, and support comes from former Thin Lizzy chaps Black Star Riders.

Hardcore Superstar: Southampton, Talking Heads, Friday 20th March The Swedish four-piece have been keeping the dream of sex, drugs and rock ‘n’ roll alive for a good 18 years now. In a world where rock bands are getting nicer and more polite all the time – more likely opting for a cup of tea and a sit down than the sort of excessive partying the ‘80s was famous for. Hardcore Superstar act as a glorious reminder of that era with a soundtrack to match.

Krokodil: London, The Black Heart, Thursday 19th March The supergroup featuring members of Gallows, Sikth, and BBC Radio 1 Rock Show mainman Daniel P Carter amongst others, impressed a whole host of people at the tail-end of last year with debut album Nachash and their stint supporting Mastodon. Now they play this one-off headline show, and what better location for their heavy, dark grooves than a small, sweaty room in a pub. This will be gloriously nasty!

Papa Roach: Belfast, Limelight, Saturday 21st March As one of nu metal’s best survivor stories, Papa Roach never stopped going or dropping hits. Despite being overlooked in recent years, they are proof that hard work pays off, as things have come full-circle for P Roach with them once again playing the big rooms. This show at Limelight will be a non-stop moshfest; Getting Away With Murder, Scars, and not to mention bloomin’ Last Resort!

Vader: Dublin, Voodoo Lounge, Friday 20th March Naming themselves after Darth Vader, and taking song influences from H.P.Lovecraft, Poland’s Vader give us as much reason to geek out as bang our heads. Forming in 1983 and playing an important part in the formation of death metal, the band are still going strong with the release of last year’s Tibi Et Igni. The band return to Ireland this week to last waste to Dublin’s Voodoo Lounge.