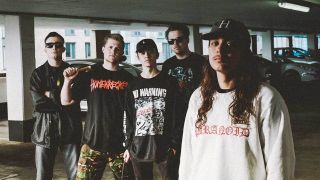 Venn Records’ latest signing Grove Street Families are streaming their new record The Las Venturas EP exclusively with Metal Hammer. Originally a band dedicated to writing solely about Grand Theft Auto (their name comes from one of the main gangs in San Andreas), they’ve evolved into a serious thrash crossover unit with Suicidal Tendencies hooks and buckets of bounce. And the odd GTA reference for good measure.

But what does it all mean in the context of Grove Street Families? Well the band explain all with this track by track!

“This was the third and final song we wrote for the EP. We knew the exact vibe we wanted for this song before we started writing it so it came together pretty naturally. Due to the vibes of the other two tracks we’d already written, the third track was probably going to be the first track on the EP, so we wanted to write a massive intro – one you can imagine being played live at the start of a set. We’ve not done an intro like that since Cleaning Up The Hood, which was the first song we ever wrote and released so we felt like it was time to bring that back. Lyrically this is definitely the most game-related song on the record, and probably the most familiar feeling. It’s basically about becoming something from nothing and the struggle to stay on top. It also pays homage to our achievements as a band, something we started as a joke turning into something we never expected in our wildest dreams and getting to do some cool shit we never though we’d do.”

“When it came to writing this, we’d had some time off from playing shows and we all went off and did our own thing for a little while, so it was a little weird coming back straight into writing. There were lots of ideas from different influences floating about, most of which came together to make this track. This is personally my favourite track to play from the EP because of the varying styles throughout and the general flow – it’s a lot of fun. Lyrically this one we decided to make more relatable beyond San Andreas, by this point we’d written two EPs worth of solely game-related lyrics, and we just wanted to do something a little different. This song is just generally about being deceived and lied to, basically people taking you for an idiot, but most importantly, sooner or later these people get found out. But of course, we’re Grove Street Families so we tied that theme in with the storyline of the game, and chucked some big hooks in there with our name, because you know, it’d be rude not to.”

“This was the first song we wrote for The Las Venturas. We pretty much jammed and finished writing this song in an evening – this was by far the easiest song we’ve written in terms of everything coming together. We as a band have a lot of thrash influences that we’ve never incorporated into our music before, so for this EP we knew we wanted to do that. We just wanted a song that people could party to from start to finish. We wanted riffs, groove and some naughty breakdowns, and I think we achieved all of that! This was the first song with which wanted to throw some external themes into lyrically, as I mentioned before. We realised we had never written a song based solely on the cops in Grand Theft Auto and this gave us the perfect opportunity to talk about some real world shit that’s happening – in this case police brutality and racial profiling.”

The Las Venturas EP will be released on cassette tape (limited to 50) and digitally via Venn Records on May 27.