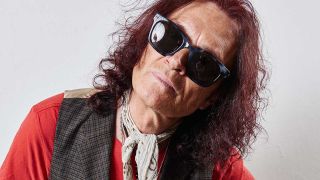 Ask Glenn Hughes if he’s clinically hyperactive, and the veteran foghorn gives a chuckle of admission. In the past 12 months alone, the 68-year-old has put in another shift that would give lesser road warriors cold sweats, with his Classic Deep Purple Live itinerary taking him deep into Europe and across the States.

The tour ties a bow on a triumphant – and occasionally tumultuous – decade in which Hughes has chalked California Breed, Black Country Communion and more on to his chaotic résumé.

The latest diversion on the Hughes journey is with The Dead Daisies, with whom Glenn will tour this summer – full dates below.

"I love performing live, the moment is now," says Hughes. "I’m really looking forward to going out on tour with the Daisies and playing as many stages across the planet as possible!"

I’ve never been so busy. I’ve had another long year with the Classic Deep Purple Live shows, performed by yours truly. Come Taste The Band, Stormbringer, Burn – those are three magical pieces of music. If you go on to YouTube, you can check any era you like, and I’ve never ‘phoned in’ these songs. But lately I think I’ve honoured the legacy more than ever.

You still seem happiest when you’re on stage.

I love to make records. I write literally five days a week. But if you’ve seen me sing live, that’s who I am. I was born to sing. What you see with Glenn Hughes live is very honest. There’s no Wizard Of Oz behind the curtain with me. I have no fear up there. When I come off the stage, I’m liable to trip on the first step. But when I’m up there on the deck, it’s where I’m supposed to be.

Myself and my manager thought this summer was the best series of Glenn shows I’ve done in decades. Something happened to me this year, and it’s all ‘inner’ stuff, not ‘outer’. I wasn’t thinking about the past or future. If people were there at those shows, they saw someone who was in the moment.

What was your rock album of the year?

My friends Rival Sons have always delivered, and I think the last one [Feral Roots] is a magnificent piece of music. They’re neighbours of mine, and still, for me, the best new rock band in the last ten years.

Years ago, I was hosting a party in Hollywood, and these two fellas come up to me, and it was Scott [Holiday] and Jay [Buchanan] with their Pressure & Time CD. I didn’t know who they were, but I didn’t even have to hear the music before I played it on my radio show. I just looked at their faces and I’m thinking: “These dudes look serious.” So I put it on, and I went: “Wfft. I was right!"

What are the best and worst things about living in this moment in time?

Well, I live in a country where I don’t think the president is the right guy, but… It’s a dark time on our planet right now. And I choose to be happy. I bring something into that room that needs to be brought. That’s the love factor.

People can talk about me all they want, but if you know me and you’ve met me, all I care about is bringing love into every venue I go to. You won’t see any loud, Jack Daniel’s-drinking, swearing dude up there. That’s not who I am, never was. Before I started speaking to you, I was a different Glenn. I believe I’m growing every hour, becoming somebody else.

Most people will remember this last decade of your career for Black Country Communion. Are you proud of that band?

Joe [Bonamassa] and I put Black Country together overnight, and it was a beautiful experience. What I’d like people to do for me, before the end of the year, if they wouldn’t mind, is play each song in order from those four Black Country records. Because when you play all those songs back-to-back, it’s all right there in front of you. It’s a beautiful thing.

Did Black Country go as you expected?

When I started working with Joe, he said to me, very calmly: “My career is built around my solo career.” So we all knew going in that we had to keep ourselves busy while Joe was doing his wonderful solo work. I just think – as a lot of people think – that if Black Country Communion had been a band that was always working for at least six months of the year, it would have been different.

But it was never meant to be that way. All I can say is that there’s only love in that camp. We are dear and best friends, and I wouldn’t have it any other way.

I have zero fear of 2020. I’ve joined forces with the Dead Daisies, and we’re going to the South of France in the next few weeks to start the album. We’ve already done a couple of songs. So I’m going to put that at the top of the list next year. I think we’re on to something special.

The new music is something special to hear, and what we have planned is the next level. We’re gonna be going global, literally. This band is pulling out all the stops. It’s another opportunity for me to shed another layer of skin, show people who I am, again. Because every year, I become this other Glenn.

Honestly, were there times when you thought you wouldn’t make it this far?

When I got sober, all those years ago, I changed my life completely. And the last few decades, I’ve been crazily honouring my health. I’ve taken some time this decade to take care of myself. I’ve got everything I need, if I just live in the present. Getting older, what you have to realise is that, look, we’re all gonna die. Life is too short, so live each day.

^ = with Judas Priest
± = with Foreigner