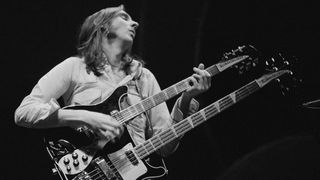 Back in the 1980s, Genesis shot a video clip to accompany their song Land Of Confusion. Rather than appear in it themselves, the band decided they would be represented by Spitting Image puppets. Despite playing in what was at the time one of the world’s most successful bands – during this period Genesis played a four- night stand at Wembley Stadium – the Spitting Image team had never had cause to make a puppet Mike Rutherford. For the purposes of Land Of Confusion, the video production team got over this problem by throwing a guitar over the shoulder of their puppet Jesus.

This and other morsels of information are strewn about the pages of Rutherford’s autobiography, The Living Years. More than just another music-biz memoir, the well written and engaging book also examines the changing face of Britain in the 1960s, as well exploring feelings of loss and grief that accompany the death of a parent. We asked the well-spoken guitarist and bassist to tell us more.

What prompted you to write your autobiography?

It really goes back to my father, who died in 1986. In my attic at home I have several trunks containing his possessions. In one of the trunks were two published books that my grandfather wrote, and an unpublished, very funny memoir written by my father. And it just seemed that there was this legacy staring me in the face. So it kind of started from there.

My father was always impeccably dressed. He had a very naval posture. He was very wise as well, and surprisingly supportive of me being in a band. But I find the difference between my father’s generation and my own to be fascinating. My father served in two wars – World War II and Korea – whereas for my generation we suddenly had the 60s. It was such a dramatic change. Whereas before each son’s ambition was to become his father, suddenly it was the age of the teenager, which had never happened before. You were packed off to boarding school as a kid.

Was it an enjoyable experience?

No, not at all. Back in those days boarding school was horrible. No one enjoyed it, it wasn’t just me. It was a dreadful experience. It really was the final days of the kind of hellish boarding-school experience that children were put through back then. I remember I had an acoustic guitar, and one of the teachers really did view it as being an instrument of revolution. To be honest, the teacher’s hatred of my guitar probably goes a long way to explaining why I persevered with it.

Despite a formal education, you were determined to try your hand at becoming a musician.

Yes. And back then the idea that you could actually make a living out of being in a band was just inconceivable. So for him to say give it a go was really quite remarkable. I’m sure at first he probably had his fingers crossed that it wouldn’t last, but he was very encouraging. But he also would have seen that I was passionate about music, and if someone is truly passionate it’s very difficult to stand in their way.

You say in the book that your father is the kind of man who was uncomfortable saying, “I love you.” Do you tell your own children that?

Oh yes. That kind of English reserve that my father had was typical of the age, not just for my father but for his generation. These were the days of the [British] Empire, and of a kind of mind-set that believed that showing tender emotions was a sign of weakness.

In the early days of Genesis, you’d play sitting down. Did it ever occur to you that you were a bit of a square?

A little. Back in those days we were a very insular band, which was both good and bad. But we didn’t come up to London to see shows, so we kind of had no idea that we were a bit unusual. So because we wrote sitting down, we didn’t think there was anything unusual by sitting down to play concerts.

Did it surprise you when Genesis became mainstream pop stars in the 80s?

I think the thing to realise is that we grew up at a time when having hit singles was the done thing. The Beatles, the Stones and The Who all had great singles, and it was all called pop music. If you think back to that time, there were so many great bands releasing great singles. So in our minds there was no division between pop music and rock music. We had no objection whatsoever to having hit singles, it was just that for the longest time we were no good at it. So when we suddenly had all of these hit singles it really did surprise the life out of us.

What are the chances of Genesis turning it on again?

I really don’t know. My philosophy is to never say never. But if we were to do it as a five-piece, with Peter [Gabriel] singing, that would be a bit tricky. The Lamb Lies Down On Broadway, for example, is told from the perspective of a young man, which of course Peter was when we recorded the album [in 1974].

Which period of Genesis’s history best represents the band?

Oh, that’s a difficult question to answer. It would have to be two: Supper’s Ready [from 1973’s Foxtrot] is one of my favourite pieces of music that we ever wrote, so I’d pick that one. I’d also nominate Turn It On Again [from 1980’s Duke], because by then we’d learned how to write snappy and catchy songs. So I think that those two songs together really represent the full range of Genesis.

Genesis Quiz: how well do you know The Lamb Lies Down On Broadway?