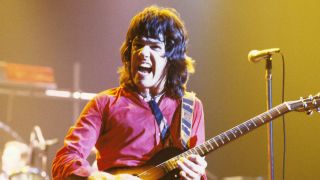 In 1990 the most extraordinary thing happened. In the midst of the death throes of over-the-top hair metal and the birth of the nascent grunge scene, former Thin Lizzy guitarist Gary Moore released an album that took everyone by surprise and took the charts by storm.

The album was Still Got The Blues – a glossy set of originals and covers and, as declared by the title, a very blues-based piece of work

“I did Still Got The Blues when I was 37-years-old. And I went back to the music that I always loved,” Gary Moore tells Classic Rock Presents today by way of explanation.

“It wasn’t commercial, it wasn’t cool. Nobody in a million years could have predicted how successful it became.”

Especially when you considered it wasn’t what anyone had expected from Moore. He was the guy from Belfast who had had a couple of stints in Thin Lizzy, but whose blues influences playing underpinned his playing rather than directly informed it. Yes, he’d first come to attention in Skid Row, a blues-rock band, but it certainly wasn’t what was expected from him at the turn of the 90s. It may have lost him some fans – there was even booing when he took the record out on the road from those expecting his high-octane rock, but at the same time, it also gained him many new ones.

Growing up in Belfast, it was unsurprising that Gary Moore became fascinated with blues-based music. “There was a great blues scene in Belfast,” Moore says simply. “All these guitar players used to come up from Cork, like Rory Gallagher. And then we heard about British blues.”

Ah, and that’s where it really all began for the young guitar hero. “John Mayall’s ‘Beano’ album [1966’s John Mayall’s Bluesbreakers With Eric Clapton] was a real turning point for me – that was the stuff I really knew about.”

But it wasn’t the post-war Mississippi Delta musicians who were influencing Moore’s guitar playing. “I mean, I’d heard the name Robert Johnson,” shrugs Gary. “But the acoustic blues didn’t mean anything to me at all. It wasn’t even so much the song and lyrics at first, it was all about the emotion of the electric guitar. My friend had the ‘Beano’ album and I spent all my time round his house. I was very passionate about this new sound. I took the guy’s album and I ruined it by playing it over and over. I came home from school and learned all the sounds, and learned all the songs note for note. I could just relate to it somehow.”

And, of course, the man creating this blistering new sound? None other than Eric Clapton. “The first time I heard Clapton play guitar, it changed my life,” says Moore candidly. “I was already learning to play that guitar, but something very profound happened when I heard that record. Within two seconds of the opening track, I was blown away. The guitar sound itself was so different. You could hear the blues in it, but prior to that all the guitar you heard in rock, well pop, music had been very staid, very polite. Just listen to the early Beatles and The Shadows to see what I mean. They were great, but Eric Clapton transcended it completely.

“He was the first person to plug a Gibson Les Paul into a Marshall amp – so you could say he invented the rock guitar. His sound was distorted, in your face. It was big, fat and passionate. No-one else was doing anything like him at the time.”

After a self-imposed apprenticeship with Clapton (including the fact that Moore adopted a Gibson Les Paul as his weapon of choice – a decision influenced as much my Clapton as his other blues hero, Fleetwood Mac’s Peter Green), Moore went on discover the old-school blues players for himself.

But by using Clapton and Green as a key influence, Moore took their blues essence and injected it with a high-octane fieryness that would go on to characterise his work with Thin Lizzy – where melody is fused with traditional blues lines. Live, Moore was impressive too – there was just something about the passion he brought to his playing. “That’s the thing with the blues – even if you’re playing the rock stuff – it instills a sense of emotion into you, and into your playing.”

And, then, when time came to work on Still Got The Blues, Gary had the clout to ask some of them to guest with him. Notably BB King, Albert Collins and Albert King all make an appearance. “Albert King and Albert Collins taught me so many things,” the guitarist admits. “I was scared to be around them at first. I wasn’t sure I wanted to play with them! We went into the studio though, I picked up the guitar and we started to play Oh, Pretty Woman and he gave me a bollocking. He shouted, ‘stop the tape’ and all this. He was establishing his authority, which I totally respected. But he liked what I was doing, and told me I had great sound. The blues guys are elegant, they’re not like rock people. They have an integrity and they’re very proud. The old guys have dealt with so much crap and come through the other side. Even though Albert King was a little bitter about it.

“Those guys taught me about phrasing and space. Albert King gave me the greatest piece of advice – he told me to play every other lick, and don’t be so fucking loud! He called me and Stevie Ray Vaughan his godsons! I was so cocky and confident and realised that I came from this big rock thing, not a pure blues place.”

The idea of coming from a pure blues place is something Moore has tried to redress in recent years. Part of which is due to the fact that the guitarist has finally come to a realisation that the blues is where it is for him. Throughout his career, Moore has played everything from pop, jazz, rock, heavy metal, blues and even ventured into dance music. He has been accused of chasing trends, but it doesn’t seem to matter. “I got accused of that with Still Got The Blues, which was a joke,” Moore told Classic Rock last year. “Nobody was doing that at the time. I was the fucking bandwagon! For Gary Moore to make a blues album in 1990 was not a trendy thing to do.”

It may not have been the trendy thing to do, but it was the album that brought Moore to a wider audience, and one that surely countless guitarists will play along to and be inspired by. It also set the template for Moore’s future career. The guitarist is now comfortable in his blues skin, happy to forsake the rock that made his name.

“I’m a blues musician now,” he says simply. “I consider myself a blues musician. I didn’t have a fear of trying new things, and I really admire Jeff Beck as a guitar player in the way he’s tried so many different styles. But at the end of the day, I’ve realised that I want to do a blues album.”

And that’s exactly what he’s done. Close As You Get is out in late May and is another heady mixture of standards and originals. “I’m rediscovering so much music at the moment and I’ve been listening to records and CDs that I haven’t heard in so long.

“It’s been a real godsend in terms of re-listening to artists I’ve not heard in years – and rediscovering songs that may not have meant so much to me the first time I heard them, but now, have more of a resonance. I don’t know if it’s an age thing, or whether my tastes have changed.”

Gary is also a recent convert to internet phenomenon YouTube. “It’s truly amazing the stuff you can find on there,” he says with the excitement of a child. “If you just spend some time searching about, there’s some wonderful footage. I found some of Jimi Hendrix playing this most powerful, incendiary blues at the Fillmore, and there are just a load of hippies at the side of the stage looking on bemused. They just didn’t get it. At all. I just wish I could figure out a way to download it!”

For the first time, the new album features Gary Moore hanging up his trademark Les Paul for just a moment and taking on the acoustic blues. “I found this amazing Son House song called Sundown on this old vinyl record, Father Of The Delta Blues and it just completely blew me away. You just believe every word of it, and it just demanded that I have a go at it. So I did. I recorded it in my kitchen, and that’s the version that’s on the record.

Moore has often embraced spontaneity in his records – after all, much of his defining Still Got The Blues were single takes on the guitar front; Midnight Blues, Oh, Pretty Woman for example. “I don’t like to rerecord if I don’t have to. Oftentimes, your first take will be the one that captures the essence of what you were trying to say with the song.”

And so, with blues at the heart of everything that Thin Lizzy’s most popular guitarist does now, it’s unlikely we’ll see a new Gary Moore rock album. “I went to see Muse recently, and that’s what rock music is and should be all about today,” he explains. “And I think that unless you can do better than that then you shouldn’t bother. I mean, rock – it’s a young man’s game. When you’re over 35, there’s just something so… well, I look in your magazine and see some of these guys and there’s just no dignity there. And that’s where the blues guys succeed.”

And it’s how Gary Moore will too.

For more on Moore, sorry, and some of his deep cuts, then click on the link below.