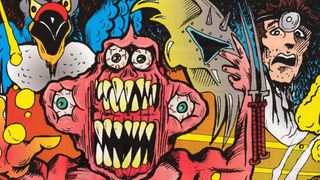 “What’s that smell?” - Misadventures of Shitman

There are few things on Heaven and Earth more loathsome than “comedy rock”. As far as art forms go, it wavers somewhere between, say, mimes and Popsicle stick art in popularity, and if it was expunged completely from the rock’n’roll history books, we really wouldn’t be missing much. Sure, there was Spinal Tap, but were you really in it for the songs? How often do you actually listen to Gwar albums? When you find a band you really like, you listen to their records over and over again, each spin of the album pushing all your secret pleasure buttons. That’s how rock’n’roll works.

Comedy, on the other hand, is based on the element of surprise. You laugh because you didn’t expect the twist of the punchline. Imagine going to see the same stand-up comic do the same exact routine a hundred times. It would be like some kind of comedic hell, right? Well, that’s a comedy rock album, man. It’s hell with power chords.

Now let’s flash back, if we may, to the early 90s. Grunge and industrial are exploding at the same rate glam metal is melting into a hot pink puddle of useless goo. These two then-burgeoning sub-genres set the pace for the decade, and the one character trait they both shared was a tendency towards the morose. David Lee Roth was out, terminal mopes like Cobain and Reznor were in.

No smiling in the downer 90’s, man. We give you endless grey and minor chords and heroin addiction and songs about killing your girlfriend. The last thing anybody needed in the 1990s was another goddamn comedy rock band. But it got one. And they weren’t even people, as far as we knew, they were cartoons or claymation or some shit. And for one brief moment, they pulled the Prozac Nation out of our collective depression and gave us a couple of solid laughs. And then we shrugged them off, left them to die, and went back to burning churches or writing poetry in rehab. They were Green Jello, and they were ridiculous. But maybe also kinda great. And even if they weren’t, their story certainly is.

Green Jello is the tireless work of one dude, basically. Bill Manspeaker. I don’t know how many he’s up to now, but at last count, Green Jello had over 250 members flowing in and out of their timeline. That’s a lot of exploding drummers. They were named Green Jello because Manspeaker reckoned that was the worst flavour, and he genuinely hoped he was forming the worst band in the world. Live shows were a riot of puppets, costumes, mayhem, and out of tune guitars. Manspeaker maintained a loft in LA in the early 90s with a version of the band that also included a future members of Tool. Rage Against the Machine and Weezer lived in the same loft. Tool was actually formed there. They got signed first, so emboldened, Manspeaker met with the president of Zoo records and pitched his band without a shred of music to back him up. He walked away with a contract and $60,000, which he then poured into Cereal Killer, the first Green Jello record.

Except it wasn’t a record at all, it was a “video album” to be released exclusively on VHS. They made a wacky, lo-fi music video for every song. Three Little Pigs was the most lavish production, a DIY claymation extravaganza that they cobbled together with no real idea how claymation or music videos even worked. And it probably would’ve all died a quiet death, except one night a Seattle radio station played Pigs as a goof. Listeners loved it, demanded more, and by1993 it was on the Billboard top 20.

It should be noted that shortly after the band released Cereal Killer in 1991 they were slapped with a cease and desist order by Kraft Foods, makers of the actual Green Jello the band named themselves after. So they changed it to Green Jelly, but they continued to pronounce it “Jell-o”. You can’t sue somebody for pronouncing something wrong, man.

Did I mention the same guy that did the Three Little Pigs video also made Tool’s ultra-creepy Sober video? Or that Cereal Killer – again, a VHS tape – went Gold (and Platinum in Australia)? Or that the music video for their follow-up single, 1993’s Electric Harley House Of Love, featured Paul Stanley and Gene Simmons, or that their follow-up to that was a duet with Hulk Hogan on Gary Glitter’s I’m The Leader of the Gang (I Am), which was a top 40 hit in the UK? Or that in 1994 they made a 4 million dollar deal with BMG to run a music video production house and spent a good amount of it making 333, their 4th album? And that when the well ran dry a couple years later, Michael Jackson – a big Green Jello fan - was in negotiations to release their next record?

Yeah, man. All that happened. Manspeaker was also one of the founders of Suicide Girls, which would eventually spawn the ‘Alt-porn’ movement and make (probably) a billion dollars.

After spending a relatively sedate decade raising his son, Manspeaker got a new version of Green Jello back together in 2008 and started touring again. He’s doing it right now, matter of fact. And listen, comedy rock still sucks, but that’s the whole idea here. The dude already told you Green Jello is the worst band in the world. But they have puppets and costumes and naked people and giant eyeballs, so how bad can it be, really?