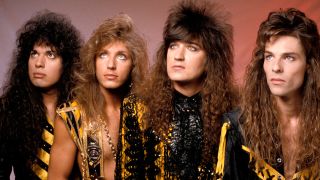 Before we even get to the Yellow and Black Attack, let’s quickly summarise the history of God-rock before they started bonking kids in the first row with bibles. In the beginning, of course, there was traditional gospel music, created and performed in churches by the congregations themselves. Gospel became popular on the radio in the US in the 1920s, and burgeoning record companies seized on the trend, recording and releasing gospel records by then-popular performers like Sister Rosetta Tharpe and Reverend JM Gates.

By that time, gospel had picked up significant influence from the blues, ultimately influencing everyone from the Motown roster to Hank Williams, Johnny Cash, and Elvis. So, ok. Still pretty good. By the 1950s, most country artists had a few gospel numbers in their repertoire, and gospel merged with R&B pretty seamlessly. In the late 60s, the hippie movement and popular musicals like Godspell and Jesus Christ Superstar spawned a wave of loosey-goosey psychedelic gospel acts like The All Saved Freak Band, the pre-10CC Ramases, The Resurrection Band, and The Larry Norman Band, responsible for perhaps the most likeable and reasonable Christian rock song ever created, Why Don’t You Look Into Jesus? Of course the hook with all these late 60s/early 70s Jesus People freak-folk bands was that they were tied in with the drugs and sex that saturated the culture at the time. It was easy to just say yes to Jesus when it involved copious amounts of weed and naked hippie chicks.

But by the 1980’s, the party was over. Reagan and Thatcher brought a wave of rigorous conservatism to western culture and that was that as far fuck-in-the-mud gospel music went. Country – already on its way to the saccharine pop monstrosity it is today – absorbed most of gospel’s strays and rock’n’roll, rebellious as always, took a turn for the sinister. It is no wonder, given the repressive times, that heavy metal would spawn outright Satanic Gospel like Venom, Slayer or Mercyful Fate, or that hardcore punk would essentially launch a war against organised religion. It was necessary. Desperate actions for desperate times. The squares are going to church and getting haircuts, so you get pentagram tattoos and form a black metal band. That’s how youth revolt works, man. And that’s why Stryper was such a fucking bummer. Stryper was like that one guy in the group that doesn’t wanna go along with whatever crazy-wonderful idea you cooked up with your friends at 2AM, the only guy who didn’t end up in a Tijuana jail because he stayed at home while the rest of you went on a sex-and-cocaine weekend bender. You can like Stryper all you want but the fact of the matter is, they tried their best to suck all of the fun out of the most gloriously hedonistic, reckless and incendiary musical movement of the 80s.

Stryper formed in Orange County, California in the early 80s by two brothers, Michael Sweet (vox, guitar) and Robert Sweet (drums). Originally named Roxx Regime, they changed it to Stryper to more readily identify with the pro-Christian image they wanted to portray. The name references a Bible verse about the lashings, aka the “stripes” Jesus got when he was whipped by the Romans. You see what I’m saying about these dudes? What a downer. The new name also suggested a pretty obvious image, so they dressed in striped spandex. Yellow and black spandex. And off they went. Their first couple records, 84’s Yellow and Black Attack and 1985’s Soldiers Under Command were both released on west coast indie Enigma Records, and were heavy enough to just seem like another Californian pseudo-power metal band. At the time, people were more put off by the yellow colour scheme than the militant Christianity, which was so over the top anyway – the cover of Soldiers has the band posing with machine guns – that it was hard to take seriously.

But here’s the thing: they were serious. It wasn’t a front. They tossed out Stryper bibles because they really wanted the kids to read them. They held bible readings backstage while their tourmates (including notorious blood-guzzlers WASP) banged groupies and gave in to chemical excess. And when the Jesus kids saw that Stryper really were one of them, the floodgates opened. In 1986, they released their third album, To Hell With the Devil. It spawned three hit singles, went platinum, and became the biggest selling Christian rock record of all time. Just enough metal kids shrugged at the Christianity and just enough Christian kids bought in to the metal to put Stryper over the top. Only in America, man. And I mean that literally. Britain and Europe were a lot less impressed with these Jesus hairballs. And they suffered a pretty swift and rocky fall from grace after that, really. The next album was full-on glam, and tanked. The album after that was all black leather, classic metal, and no Jesus, and it tanked, too. Then the 90s hit, and they broke up. And Christian glam metal died with them. Thank Christ (ahem) for that.

Of course, that’s not really the end of the story. What Stryper really did was create a new, secondary metal market that exists right under our noses and we don’t even know it. For almost every sub-genre of heavy music there’s an inferior Christian version playing the church circuit. Christian death metal, Christian grindcore, Christian fucking black metal, man. Look it up, it’ll freak you right out. That’s Stryper’s fault, basically. Stryper also got back together. And every right-wing politician in America mentions Reagan every chance he gets these days. It’s pretty grim. Just say to no to Jesus-metal, kids. I barely survived the 80s the first time.

Next week: Lips and hips