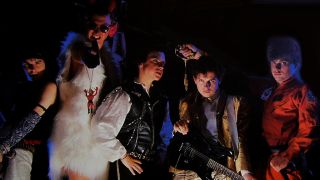 “Yup, it’s balls-out sinning, and we got no shame” - Come On Over To My Crib

For a while back there in the 80’s, Tesco Vee was basically the King of Punk. This Michigan bred school teacher-gone-wild was simply the last word in the stuff back then. And why wouldn’t he be? He was bigger, louder, funnier, and smarter than just about everyone else. With the Meatmen, he obliterated the notion that “hardcore” was the stuff of humourless, straight-edge, vegan eco-warriors. His version of hardcore was basically Motley Crue on a peanut butter and jelly budget. Those were good days, when Tesco was king. All the punk bands grew their hair long and started playing rock. Or, more specifically, RAWK. For proof, check out the mid-80’s output of SSD, Gang Green, Black Flag, the Necros, Verbal Assault, Decry, or the Meatmen themselves.

The whole notion of “Super Rock”, of turbo-charging your formerly tinny powerchords until they threatened to set the entire front row’s head on fire, that was Tesco. And what a showman. If you couldn’t hang with firing off 50 Borsht Belt euphemisms for tits, couldn’t break out into an iffy Middle-Eastern accent mid-song, weren’t down with gold lame suits and cowboy boots, then you just weren’t living in Tesco’s sexy-future-rock-now-Utopia. Quite simply, he made rock n’ roll fun again, and if you were too stupid or uptight to get it, then he would gladly show your pansy ass to the door. It all came to a frothy head in 1986 when the Meatmen - formerly skinny, short-haired assholes screaming about how “Crippled children suck” over ragged triple speed punk riffs - reinvented themselves as the ultimate arena-ready flash metal band and unleashed the fearsome Rock N’ Roll Juggernaut, the greatest punk-gone-rawk record ever made.

First though, a little background. See, there was this fella, Robert Vermuellen, growing up in Lansing, Michigan, in the mid-70’s. He dug rock’n’roll and getting’ it on, all of that, and even had his own Iggy-inspired fanzine, The Iguana, back in his high school days. Problem was, all his fave bands - Stooges, Dolls, MC5 - had already broken up. So to keep the fires lit, he had to form his own goddamn band. In 1979 (or so), Rob became Tesco Vee (Tesco’s was his favorite record store) and formed The Meatmen with whatever local jackasses he could round up. He also launched the seminal punk fanzine and label Touch and Go around the same time. This is all while working as a fourth grade teacher by day. The Meatmen released their first single, the Blood Sausage EP, in 1982. Filled with high velocity, Fear-esque garbage-punk, it contained ham-fisted sonic punchlines like One Down, Three to Go (“Fuck, fuck, fuck the Beatles/Smelly, hairy old people”) and the touching anti-menstrual ballad I’m Glad I’m Not a Girl.

This went on for a year or two, culminating in the We’re The Meatmen and You Suck LP, which was basically the album GG Allin would have made if he wasn’t brain damaged. Realising he had taken the formula as far as it could go, Tesco broke up the band, moved to DC, hooked up with half of the recently split Minor Threat (including Brian Baker, who would go on to form flash metal punks Junkyard), and released a solo record, Dutch Hercules, his first dip into the kind of dick-waving hyper-glam that would culminate in Juggernaut and become standard-issue in the he-dog world of flash metal. Sure, it was all a joke, but how serious was any of this, really? Fact of the matter is, if you really wanna get philosophical about it, the first Zodiac Mindwarp song was not Wild Child, it was Wine, Wenches and Wheels from Dutch Hercules, written a good year before Mark Manning even dreamed up his manifest destiny. Imagine Breakin’ the Law played by sloppy punk rock assholes, and the biggest, baddest asshole of the bunch barking out lines like this:

“Big chested girls with wine in their guts/Fine lookin’ sluts Slam it into overdrive/Tape’s blasting Iron Maiden live So glad to be alive! Black leather seats slidin’ down/ Dorkin’ in my mean machine I live for it, you know it!”

It was obvious that Tesco was on to something with all this cock metal stuff. He knew it, we all knew it. He got the Meatmen back together and released War of the Superbikes in ‘85, an apocalyptic, tongue in cheek, punk rock-cum-biker metal epic anchored by an over the top Nazareth cover (Razmanaz), an ode to ABBA, and a comedy skit about a TV game show in Tesco’s mind called “Punkarama” that offers up Joan Jett as a prize to the winning lesbian.

Rock N’ Roll Juggernaut starts off like a concussion grenade, with the utterly headbanging title track. With a riff that sounds like Black Flag (long haired, Henry Rollins version) channeling their inner Iron Maiden (Di’Anno version) at a Motley Crue (pre-suck version) tribute show and Tesco’s berserk, junkyard dog delivery, RNRJ is a statement of intent, a call to arms, and a devastatingly lethal dose of surly flash metal that parodies macho cock rock so successfully that it IS macho cock rock.

And it just keeps going. True Grit is all growls, punk-metal crunch, and Tesco’s raspy first-person narrative about pick-up trucks and assfucking your own children. Centurions of Rome is a fantastic, rousing adventure of pure macho rock thunder. Turbo Rock is another monster of a song, fueled by a machine-gunning riff that sounds exactly like Slayer playing sleaze rock. Of course, the chorus dates it like a motherfucker – “This is the 80’s, high time for Turbo Rock” - but just look at Billy Idol’s shoulder pads in 1986, man. It really was time for Turbo Rock, for “Catatonic speed-crazed cosmo jocks”, whatever that means. And listen, that was just the first side of the record. Suffice to say, if Tesco had kept this ruse up, we wouldn’t have needed Guns N’ Roses at all.

But he didn’t. He broke up the band again and took up vintage toy collecting. And we got Britny Fox records as a result. So it goes. Still, Rock n’ Roll Juggernaut remains one of the greatest full-tilt gonzo flash metal records of all time, and Tesco – who recently got the band back together and is terrorising ‘the kids’ as we speak – remains one of rock’s most potent visionaries. Al hail Dutch Hercules!

**Next: None more black: the ballad of Black Death **