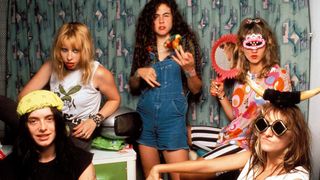 “Oh my God, the baby’s been cooked!” - Babysitters on Acid

Nostalgia tends to erase the jagged edges of the past, and that is undeniably true of glam metal. Sure man, the glitter and sweat and arenas and Headbangers Ball and the teenage make-outs in the back seat of Camaro Z’s were, indeed, pretty fucking excellent all around. But the music was also shockingly conservative in its gender/sexual politics. That seems impossible, given the PMRC’s government-sponsored attempts to ban bands like Motley Crue or WASP, to say nothing of the fact that the entire genre was built on dudes in drag shaking their tail feathers, but believe me, glam did not entertain many points of view outside of the traditional straight white male’s desire for easy women and lost weekends. Women were represented mostly as set decoration in music videos, and as the fodder for chest-thumping “tell-all” interviews about the dirty backstage lives of filthy-rich rock stars. Granted, there were a few exceptions. Lita Ford was able to hang in there. And there was Vixen. But Vixen never had it easy, ever. The fact is, it was a man’s world. But nobody told that to the Lunachicks.

Not that the band ever professed to be about defying or breaking down gender roles. Just the opposite, really. They’d get asked about it in interviews all the time, and their standard snarky answer was that they were “socially unconscious”. And while they did write plenty of songs about fucking, it was more about the gory glory of it all, not the politics. They also had a lot of songs about food. Food and sex was their thing, for the most part. But they also wrote about the pressure young women went through on a daily basis to look and act in socially acceptable ways, even at the expense of their own health.

Songs like Binge And Purge and Bitterness Barbie were laced with barbed humour, but they addressed some pretty significant issues. And the truth of the matter is, the Lunachicks were an all-female band fronted by an actual fashion-model and they did not kowtow to the male gaze, ever. Their get-ups were fucking crazy, but they were created and worn entirely on their own terms. They expected respect, and would crack your skull with their bass guitar if they didn’t get it. And this was all in, like, 1988, when the prevailing culture was all-dudes, all the time.

Lunachicks were bad-asses, straight-up. Total fucking heroines. Nearly thirty years down the line and it’s a given that half the bands in town have multi-gendered line-ups, but during the Lunachicks’ reign, women-in-rock was still a rarity. Along with L7, the Lunachicks basically defied every convention created by glam metal and paved the way for the Riot Grrls and any other woman who ever wanted to rock out with maximum volume and not be hassled by men and their macho bullshit.

Lunachicks were formed in high school in the mid 80’s by a pot dealer and two of her best customers, basically. The first song they wrote was about killing one of their teachers. Musically they love-hated classic rock and just plain loved Kiss and Black Sabbath and the MC5, and their signature look/sound quickly became a mish-mosh of low-budget glamour and high-concept absurdity. They liked John Waters and splatter movies and fast food and bright red lipstick and they poured it all into a fright wiggy stew of day-glo punk rock that looked like a public access television satire of mid 80’s hair metal performed by teenage smart-asses ripped on Mescaline. And that’s pretty much what they were.

Sonic Youth main-man Thurston Moore saw them pretty early on, and helped get them signed to UK label Blast First, who released their debut, Babysitters on Acid, in 1990. A classic of ramshackle excess, Babysitters set Lunachicks on a course that found ‘em running amuck in the lower-reaches of the burgeoning “alt-rock” nation for the next decade or so. They showed up in movies a lot, low-budget Z-grade stuff like Blue Vengeance and Terror Firmer, and toured pretty consistently. They were one of the only all-female (or even mostly-female) bands to play the Warped Tour, which proved that punk had as many gender problems as metal did. And they inspired a lot of women to pick up instruments and play rock’n’roll exactly the way that they wanted to.

The Lunachicks broke up in the late 90’s, but their influence remains. Who knows what rock would look like without them. I’m guessing Warrant would’ve lasted a lot longer. Shudder

Next week: The other Britney. The one that can’t spell.