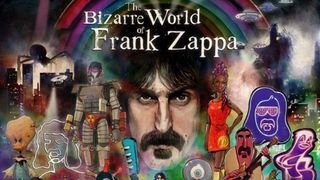 So we went to see The Bizarre World Of Frank Zappa show at the London Palladium last night, the much-talked about 'hologram' tour that has drawn as much ire from some quarters as it has anticipation from others.

So what did we learn?

1. It's not strictly a hologram show

2. Seeing a hologram of Frank is weird

When the Zappa hologram image appears, centre stage, framed within a device that obviously 'brings it to 3D-life' at the start in Cosmik Debris, you're taken aback. He's not quite as big as the other musicians on stage, set back further, and there's no interaction. But when he sings in that distinctive and rich deep voice, and cuts loose on the guitar, it has quite an effect on the audience. But the end of the set, as he bids farewell in Camarillo Brillo you're quite used to seeing him.

3. It enhances your appreciation of Zappa's music

I'm a fan of Frank's music. But not a Zappa diehard. Perhaps had this been Bon Scott with AC/DC I may have baulked at attending. Neither was I particularly keen on the idea of the Dio hologram tour idea. But going to review this show I found I enjoyed the whole thing tremendously. And given constant shifts in both technology and society, I wouldn't bet against this kind of event becoming the norm in the future.

4. Not everyone enjoyed it

From cautious early applause to the standing ovation at the end, you'd have to say the show was a winner. We could have done without Ahmet and sister Diva larking around between the set and encore, even if it was Ahmet's birthday. But they're the keepers of the Zappa kingdom these days... And Steven Wilson reported to us at the interval that an angry punter seated near him was making his feelings well known. 'That's not Frank Zappa', was one loudly spluttered criticism among many we were told. Which begs the question, as with those who go to see Opeth and shout 'Play some metal', why bother going in the first place?

Ahmet is quick to point out to that in the current issue of Prog that Frank predicted this kind of thing in The Real Frank Zappa Book (chapter 18, if you want to find out). And the one overriding thought we were left with at the end was simply 'Frank would've probably loved all this'.

Frank Zappa is on the cover of the latest issue of Prog which is on sale in newsagents now. Or you can buy it online.