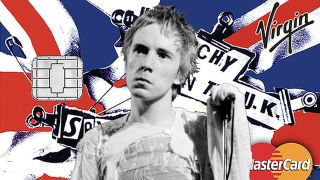 Virgin Money have launched a series of credit cards bearing the artwork for Sex Pistols’ 1977 album, ‘Never Mind the Bollocks, Here’s the Sex Pistols’ and their single ‘Anarchy In The UK’.

Virgin boss Richard Branson – who signed the Sex Pistols to his label in 1977 – said in a statement: “When Virgin Money suggested celebrating Virgin’s unique music heritage by launching Sex Pistols credit cards, I thought it was a great idea. I was looking forward to seeing the classic Never Mind The Bollocks slogan loud and proud across our advertising. It’s fun, iconic and would certainly catch the eye.”

He adds: “Who would have thought the guy who brought you the Sex Pistols would own a bank?

Quite. All this punk rock consumerism got us thinking: which credit card designs would we like to see? It’ll be a chilly day in Hell before these would be manufactured…