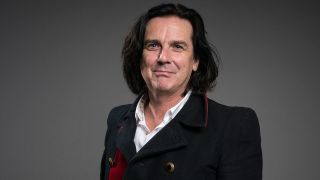 Marillion frontman Steve Hogarth has just returned from the band’s mini-tour of Japan. He might be approaching his 30th year with them, but neither are showing signs of slowing down. And this despite 2017 seeing them still basking in the afterglow of their 2016 album Fuck Everyone And Run (F E A R), play a prestigious gig at London’s Royal Albert Hall and run their biannual Marillion Weekend. As for 2018, it looks similarly busy, with a Cruise To The Edge followed by tours of the US, UK and Scandinavia, plus talk of a Greek amphitheatre show. Then there’s the next album to start. But first there’s an interview with Classic Rock. “It’s a bit early in the day for rock’n’roll,” Hogarth says, laughing. “But let’s press on.”

We haven’t been since we played the Brave album there in ninety-four, so we didn’t know what to expect, but the gigs were sold out. The audiences are very interesting. They sit and clap politely for the first three songs and by the end they’re up on their feet, cheering. The thing I noticed with the Japanese that’s a bit eccentric is you get a handful who come to the hotel and they’ll wait for you all night, and they’re still there in the morning. It’s only in Japan where you can get up at four a.m. and go down to reception and they’re sitting there.

Marillion always inspired devotion – well, that and critical dislike – but Fuck Everyone And Run (F E A R) has made people take Marillion very seriously.

Well, I’ve been taking them seriously all along [laughs]. I can’t speak for the rest of the band.

Have there been any examples of strange fandom this year?

I did run into a bloke in a hotel in Montreal. I told him what I did, and he went, “Oh god, not you lot!” Turns out he’d just written a thesis on Marillion’s crowd-funding business model for the final year of his degree in Economics at Oxford. I was just flattered that Oxford University had put us on their map. That felt like official recognition. That and The Guardian five-star review [for F E A R] felt like a vindication of the last 25 years’ struggle. It was a pretty fearsome process making F E A R, to be honest, I was quite nervous about reactions. Because it’s a protest record, and I’m having a go in no uncertain terms. I thought it might be greeted with a yawn: “Oh god, get off your bloody soap-box, Hogarth.” So the response was a huge relief.

Has it been weird having an album out called F E A R, with widespread Brexit dread, Trump bestriding the globe like an orange goon, and the nuclear face-off between North Korea and the States?

Yeah, they’re calling me Hogstradamus now! I’ve got a little bit in the habit of being ahead of these waves. I coined the terms “leavers” and “remainers” about four years ago, then wrote a song about them [The Leavers]. Then we turned on the news to hear about leavers and remainers. That was a bit strange. And the song Eldorado is about immigration and no longer being proud of a country you’re part of. What’s interesting is that, having written it about this sceptered isle, if I sang it in front of an American audience I felt I needed to apologise for it because it felt like a dig at them. And then we’d go to Spain and sing The New Kings about economic collapse and where power really lies, and I’d feel like I’d written that for Spain. I’d have to keep explaining these songs everywhere we travelled.

Well, it’s a worry having two blokes with strange haircuts facing off against each other on opposite sides of the world: Donald with his honey quiff and Kim with his radical steampunk job. They’re both egoistic nut-jobs and both seem to have access to pretty fearsome weaponry… That’s probably the most unsettling. But to be honest nobody’s telling us what’s really going on. The news is just press releases, with a little bit of investigative journalism sprinkled at the edge. The stuff on TV is bread and circuses for the masses. Am I sounding paranoid? Maybe a paranoid is someone in full possession of the facts. I just sniff the air and get a feeling and that’s how I’ve always written.

Hopefully not. The biggest threat to all of us will remain what we are doing to the planet. I know that sounds hippie-ish, but there’ll be a tipping point where the planet can no longer sustain us. The other thing is an airborne virus like Ebola that transmits like the common cold. If that should come along there’ll be a mass culling. It won’t do us much good, but it will cut us down a bit.

Ours at the Royal Albert Hall! That was amazing. I wanted to play there my whole life. I’ve been nagging the band ever since we met. It was an extraordinary night on so many levels. Just to walk out on stage and gaze at the auditorium. We really pushed the boat out: a lot of bells and whistles, lights and lasers. We got spontaneous ovations after each song. That almost got embarrassing after about the fifth one. It was incredible, because it felt like an affirmation of all we’ve been through. Steven Wilson, Nick Beggs and Steve Hackett were there – the prog glitterati. The single [Living In F E A R] was No.1 in the physical chart at that point. I always thought if we could play the Albert Hall it would be one of the things that flashes through my mind when I croak.

Tom Petty, I’d say. That made me really low. I didn’t realise he was as old as he was. I assumed he was my age, maybe a bit older. He’s written some great songs. And he was inherently, naturally, cool.

Didn’t you hurt yourself during the Marillion Weekend in Ouddorp, Holland?

Yeah. I stepped over a light on the rear edge of the stage and hit the deck. I was really fortunate there was nothing down there, because if there’d been any horizontal metal work or stage supports I might have broken my back, been in a wheelchair. I was lucky. I just dislocated a rib. I went to a physio about a fortnight later, and he said, “I’ve just put one of your ribs back in.” “Oh, cheers! That’s going to make tying my shoelaces a lot easier.”

How was the Weekend apart from that?

Immense. There’s such a lot of work to prepare for three completely separate shows. You’re having to rehearse seven hours of music. We’re not getting any younger so just retaining that amount of music in our brains is hard. And we don’t exactly write three-minute pop tunes… The songs are quite intense, and it’s not as though any of us can read music – it’s all in our bonces.

One of the Marillion Weekends was in Chile. How intense are Chilean Marillion fans?

All Marillion fans are intense. It’s not music you listen to while hoovering and go: “Oh, that’s nice.” The ones who get it do so to their bones. It’s like a soundtrack to their lives, and the atmosphere at our shows reflects that depth of feeling.

Does the intensity ever get scary?

No, we’ve been really fortunate. Our fans are the kind of people I’d happily go for a drink with, almost all of them.

Do they ever turn up at your house and say: “Let’s go for that drink, then, shall we?”

[Laughs] I’ve not had anybody camping outside. I’ve had people come up to me while I’m shopping, going [salt of the earth voice], “Alright, how’s it going?” “Fine, mate.” They’re all pretty cool. There’s maybe one German girl who’s a bit on the edge, but she’s no trouble, really.

Isn’t it weird for fans to have this Hogstradamus, prescient soothsayer character in their local supermarket?

Nah. I just tend to flop about in a pair of jammy bottoms and a jumper when I’m not dressed up, when I’m off duty. My supermarket of choice is Tesco, although if we want something a bit high-end we pop to Waitrose. I would go to Aldi – I’m not too snobbish – but there isn’t one locally. This is a bizarre interview.

How do you intend spending December?

I’m doing my traditional Christmas tour, just me and a piano, where I turn up and just see what happens. I’ve been doing them for the last few years. I basically sell tickets to see if anyone is prepared to be in a room with me.

How many turn up?

More than you’d expect! About three-to-four hundred. I usually do churches and caves. I bring a Christmas tree and invite everybody to bring a bauble, and they dress the tree during the gig. And I hand out tequila shots to anyone who puts a bauble on the tree. It’s more of a goof-out than an evening of music. I do a lot of covers and take requests: a bit of Leonard Cohen, a song by Al Stewart called Roads To Moscow, about the Russian campaign in the Second World War. I’ll probably do Beatles songs and the odd Crowded House number. I’ve been known to play The Model by Kraftwerk. I read from my diaries. I’ve had quite a curious life.

It’s going to be hard to follow F E A R. What do you have in mind for the next record?

Well, my gut feeling is to get as far away from it as possible and approach the next record with: “Okay, we’ve been there and done that. Let’s redefine what we are.” Each record is a reaction to the one before. Maybe a nice country and western record.

Have you emailed the others with ideas?

I haven’t had to email them – I’ve been stuck in a van with them! Every now and then they’ll say: “What about the next record?” and I’ll say: “Leave me alone. Don’t even talk to me, otherwise I’ll have a nervous breakdown.”

Band relations are pretty good these days, aren’t they?

You’re absolutely right. We’ve had our ups and downs. At the moment we’re pretty tight. There’s a similar atmosphere to the one during [1989’s] Season’s End. After all these years, we still enjoy collaborating, playing live still feels fresh, the album’s been really well received… We’re in good shape.

The inside story behind Marillion's Clutching At Straws

Chris Kimsey to give inside track on Marillion’s Misplaced Childhood