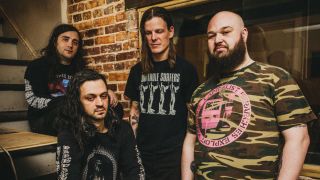 Made up of members of underground metal mainstays Full Of Hell, Backslider and Triac, and with references to the likes of Melvins, Unsane and Cherubs tucked within their sound, it's fair to say Eye Flys are one of the most exciting groups on metal's horizon right now.

It follows then, that if you're a fan of all things sludgy, noisy and full of snarling swagger, their new album Context will scratch a considerable itch when it comes to gratifyingly loud new music. Best start clearing a spot at the top of your end-of-year lists now.

Here, vocalist/guitarist Jake Smith guides us through new album Context one track at a time.

Lyrically, it’s basically about being agnostic I guess, or the approach to life that comes along with that. “What the fuck makes you so sure?” is kind of the catch-all rhetorical for life in my head when it comes to most anything big-picture related. Musically, I remember thinking the main riff sounded like Crossed Out when Pat showed it to me, but then in the jam spot it felt like this kind of seasick but pummelling ass-beater with an element of disarray.

Similarly to Stems, the lyrics address perception. Things we’re willing to believe change over time, and sometimes they change in an instant. For better or for worse. At one point while practicing, this song was known as “the fast one”, which can be a common working title for any band… but never did I think a song at this tempo would qualify.

3. Crushing Of The Human Spirit

The title tells part of the story, but essentially this song is about winning and losing.  This song is the first one where I was like “Fuck yeah Pat, do a million flams and crush that snare drum” in my head.

The main riff in this song was the first thing Pat taught me for the band when I joined, I remember thinking “Holy shit, we’re doin' this… this is full on Helmet style, which means we gotta be reeeeal tasty with it”. It definitely set the precedent for the level of power we wanted to bring to these songs: feels like getting hit with a hammer, in a good way.

5. The Triumph Of Hagbard Celine

Based on one of my favourite books, Illuminatus! It’s a story that takes place in infinitely different times and places and always answers your curiosities with “Maybe”.

Musically, this was my first contribution to the band. I was going for a Melvins kind of thing in my approach to the riffs, but in a rare occurrence I wrote it on bass and for me that means that subconsciously there’s always going to be some kind of vague Man Is The Bastard influence. I think I tried to get a little too outta pocket with it and Pat helped me reign it in and keep it more focused and powerful.

Basic shit, sometimes in your extended social groups there’s awful people that you always knew were shitty and the proof turns up in the pudding and now you wish bad things on them. Being a man in this world it’s important to recognise and channel parts of your masculinity that un-addressed can lead to toxic behavior. This is relevant to the subject in that this person has displayed extreme toxicity which inflicted pain on other people, and relevant to myself in that being able to blow off steam in a song like this feels like I’m channeling the things that make me feel toxic into a place where it belongs.

When we got the masters sent over for approval, I listened to them in my van. During this entire song my van was vibrating like crazy. It sounds so mean to me that it seems almost exaggerated or something, which makes me love it even more.