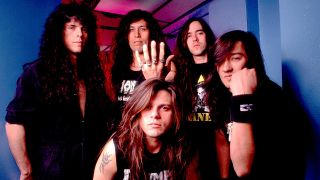 Long considered to be the first off the subs’ bench should one of thrash’s Big 4 fall by the wayside, Testament have overcome more than their fair share of adversity – from time in the post-thrash wilderness, unstable line-ups, and life threatening illnesses. Anchored by the colossal frame and lungs of Chuck Billy, the oft-copied but never bettered riffing style of Eric Peterson and in Alex Skolnick (one of the finest guitarists in thrash), Testament have gained respect and admiration for their prestigious output. But which album is the best?

The last album to feature the classic line-up includes some stone cold classics in the form of iron-plated anthems Electric Crown and the moody Return To Serenity. However, this tentative rather than tenacious foray into more classic metal territory paled in comparison to what had elevated Testament to thrash’s upper echelons.

A change in personnel brought a huge departure from the style the band had cultivated for a decade. Billy’s noticeably lower vocals came to the fore over a rush of different elements, from bouncy mid-tempo groove to bursts of death metal. A mixed but necessary step for what was to come.

With Billy paying homage to his Pomo heritage in the awesome Native Blood and spewing fire on Rise Up and True American Hate, Dark Roots Of Earth possessed plenty of vintage Testament power. Unfortunately the band’s tenth album suffered from the weight of expectation and a few middling moments, not least the misguided Cold Embrace.

Their fourth album – and their third in as many years – may feel slightly rushed, but it has been unfairly maligned due to the inclusion of divisive ballad The Legacy, which more than holds its own 26 years later. Peterson’s trademark guitars are hook-laden throughout, propelling the likes of Falling Fast with its ridiculous Skolnick lead and the title track’s imperious stomp.

Taking the death metal influences that crept in on Low to a whole new level, Demonic slowed the pace and upped the ante. Billy’s guttural growls sounded imposing over the eerie peaks of The Burning Times and hammer blow riffs of the hideous Murky Waters, sewing the seeds of growth in the supposed thrash wasteland of the mid ‘90s.

Though marred by a financial spat with bassist Greg Christian, the band’s latest album delivered full-blooded thrash with a renewed vigour. Influenced by ancient extra-terrestrial conspiracies, the notable inclusion of former Death rhythm section Steve DiGiorgio and Gene Hoglan kept the clinical riffs rolling along at a ferocious pace.

Rounding off a scintillating three-album salvo, there’s very little to separate Practice What You Preach from its predecessors in terms of sheer quality. Greenhouse Effect and Sins Of Omission crackle with propulsive vitality while Time Is Coming and misleadingly titled The Ballad sound absolutely massive, benefiting from a beefed up production.

Easily going to toe-to-toe with thrash’s biggest and best debuts in the genre’s most celebrated year, The Legacy thrummed with razor sharp musicality, menacing riffs and a youthful bluster that continued throughout the rest of the decade. The enduring anthem Over The Wall coupled with the unhinged assaults of C.O.T.L.O.D. and First Strike Is Deadly cemented the band’s position in the vanguard of the Bay Area scene.

So the ‘90s was a thrash wasteland, was it? Two years before Slayer came back all guns blazing with God Hates Us All, Testament refined their death/thrash fusion. Featuring death metal luminaries Steve DiGiorgio and James Murphy on bass and lead guitar, and none other than Dave Lombardo behind the kit, The Gathering was a precision strike to the senses.

As comeback albums go, few are as riveting as this. The first since Chuck Billy had kicked the shit out of cancer saw the returns of Skolnick and original bassist Greg Christian with sticksman Paul Bostpah laying down drums for one of 21st-century metal’s finest moments. Billy sounded monstrous throughout while Skolnick and Peterson’s twin riffage hit a career high on The Henchmen Ride and More Than Meets The Eye.

Arriving almost two years to the day after their debut, the band’s second album took The Legacy’s blueprint and upped the stakes to produce their finest collection of songs to date. Into The Pit, Disciples Of The Watch and the title track are indispensable thrash hallmarks while even the rushed Aerosmith cover – added to fulfil the contractually obliged 40-minute length – adds to The New Order’s formidable status.