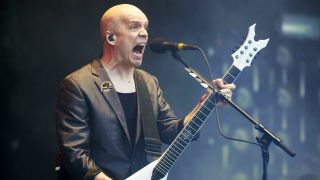 Devin Townsend is a true musical maverick – and, to latecomers, an endless fountain of fart jokes, puppets and flying anuses.

The 43-year-old Canadian was given his break over 20 years ago by Steve Vai, and sang on his 1993 LP Sex & Religion. Since stealing the show on that album and actually having a poo in Vai’s guitar case, Devin has created and disbanded death/thrash/industrial/absolutely perfect metal outfit Strapping Young Lad; he’s done prog, pop, country, ambient and every other style of music under various guises, somehow finding time to work with everyone from Front Line Assembly to Lamb Of God, construct an army of puppets and nonchalantly push the boundaries of artistic expression.

Devin played to a sold-out Royal Albert Hall earlier this year, armed with giant farting ballbags and an hour of songs about strong coffee. That show, Ziltoid Live At The Royal Albert Hall, will be released next month in a variety of formats. It’s as good a time as any then, for Devin to pick his 11 favourite songs from the vaults…

DEVIN TOWNSEND – Truth (Infinity, 1998)
DEVIN: “This song was never recorded well. It sounds like shit – a lot of my records sound like shit! I’m gonna redo Truth because it has a ton of potential; it has an energy we won’t be able to recapture but I think we can refine the purpose of the song.”

THE DEVIN TOWNSEND PROJECT – Gato (Ki, 2009)
“I didn’t achieve the idea in the way I was hoping, but it still works. It was supposed to be a subtle thing that gains momentum and then becomes scary based solely on that momentum, but it ended up being a lot more song-oriented than the original plan; the vision was refined along the way, though, so I’m happy with it. That’s the first song Ché* *[Aimee Dorval] sang on, and that’s when I made a mental note that she and I should do something together in the future.”

**THE DEVIN TOWNSEND PROJECT – Deconstruction *(Deconstruction*, 2011)
“It’s a good song and Oderus [Urungus, GWAR] is on it. He and I were buddies and it sucks that he’s dead. But, y’know, he’s Oderus, so he was gonna die at some point!”

**CASUALTIES OF COOL – Moon *(Casualties Of Cool*, 2014)
“I’d done one of those hippy lemonade cleanses and lost eleven pounds. Y’know, one of those ‘Shit Yourself Thin In 10 Days’ things. I wrote Moon during it and I remember it having a clarity I doubt I would’ve been able to capture in any other way. “

**DEVIN TOWNSEND – Bastard *(Ocean Machine: Biomech*, 1997)
“It’s super miserable. I was asked before, ‘How much of your joking and hanging out with the audience is your true nature?’ It’s not my true nature at all! But part of this thing is reciprocal – if someone’s gonna go far for you, it’s only right that you do the same, especially when people have an emotional investment in it. But as a person, I don’t want to be around anybody, ever! Even people I love! I just wanna be on my own. When I think about things like melancholy I tend to think that’s where things are rooted, so songs like Bastard are a good example of that in an early stage.”

DEVIN TOWNSEND – Planet Rain (Physicist, 2000)
“I continue to be unhappy with the Physicist record in terms of production, but Planet Rain is a really good song.”

**DEVIN TOWNSEND – Mountain *(Terria*, 2001)
“I was experimenting with sustaining notes on top of chords that have a lot of reason to play ball with each other and then just smeared it with echo, and the song in general has things about it that were really new for me at the time. At the time, I thought the production was good, but I listened to it the other day and the kick drum was horrible – the snare’s not defined either. Overall, though, it has a good effect.”

**THE DEVIN TOWNSEND PROJECT – The Mighty Masturbator *(Deconstruction*, 2011)
“There’s a lot of reasons why I made Deconstruction, but one of the predominant ones is there seems to be a fascination with complicated music that, typically, I don’t enjoy. I certainly don’t enjoy listening to it. Deconstruction’s purpose was to make that complicated statement about the futility of complicated statements. That’s why this is called The Mighty Masturbator – it’s such a masturbatory musical thing. It’s got Greg [Puciato, Dillinger Escape Plan] on it and he’s a friend.”

**STRAPPING YOUNG LAD – Skeksis *(Alien*, 2005)
“This was a really cool achievement for me. Gene [Hoglan, Strapping Young Lad] and I had gotten together and taken an idea really far away. The melody from The Dark Crystal’s in it; Skeksis is one of the characters in that movie and Ziltoid was based on The Dark Crystal. That movie holds a massive significance to me, because it illustrated duality to me in a way that I really related to as a kid.”

**THE DEVIN TOWNSEND PROJECT – Grace/Angel *(Epicloud*, 2012)
“I’m gonna mash these two together. They’re healthy and spiritually significant to me but totally nothing to do with religion. I know what side of the fence I’m on. I don’t like evil shit or sadistic intentions. I like parts of humanity that are compassionate and kind, and I choose to focus on that. But I also don’t like religion, so it’s a weird dichotomy. I had a gospel choir on these tracks and I had to give them that spiel before they did it, right? ‘I’m not on the team, necessarily, but I totally relate to the sentiment of spiritual connectivity, so why don’t we just do this?’ And they just said yeah!”

Devin Townsend Presents: Ziltoid Live At The Royal Albert Hall will be released on November 13 through Century Media.