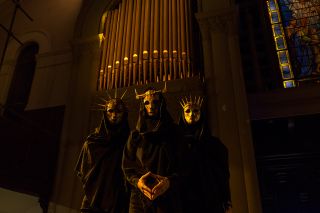 Black metal has often mapped out its most warped visions on the sprawling urban metropolis, be it the Norwegian visionaries such as Dødheimsgard, the reeling, inter-dimensional lurches of Gallic wrongdoers Blut Aus Nord and Spektr, or paranoia-saturated, roaming adventures of British acts Axis Of Perdition and Voices.

Staking a claim as the most nightmarish and most bewildering of the lot, though, are New York’s Imperial Triumphant. The band’s imminent new full-length, Vile Luxury, isn’t an album so much as a nausea-inducing overture to a home city where claustrophobia, corruption, constant motion, churning battle lines of inequality and a multicultural cacophony are enough to send all your co-ordinates into freefall.

Due to be released, rather ominously, on Friday, July 13 - via Throatruiner Records in Europe, and Gilead Media in the US - Vile Luxury is an occult matrix of discordant riffing, restless, off-kilter dynamics that makes Portal sound like the Ramones and a willingness to bring a forthright, avant-garde sensibility to black and death metal that’s marked out the US extreme scene of late.

For those of hardy sensibilities and willingness to enter realms for which no guide exists, we are streaming Vile Luxury in all its frayed-senses wonder.

“Vile Luxury is our most refined and metropolitan release to date,” say lead vocalist/guitarist Zachary Ilya Ezrin. “We took the New York City influence that shaped the world, embraced the aspect of our sonic pyramid that at its core comes from jazz and applied it to black metal. Expect that it will be nothing like what you know and let it reveal itself.”

With that in mind, step across the threshold and prepare to buffeted by the unruly currents of Vile Luxury below!

And pre-order Vile Luxury in the EU here, or in the US here!