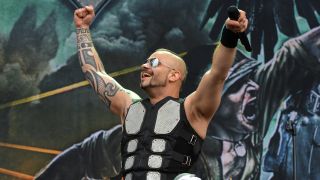 Amongst a varied bill on the Zippo Encore stage, the middle of the day was reserved for two bands who rarely fail to deliver the goods. Both on different ends of the spectrum but resolutely solid.

“A lot of people talk a lot of shit, but we are right here, right now and we are Sepultura.” As opening statements to the crowd go this is pretty impressive work by Derek Greene. It’s no nonsense, no compromise and no bullshit, which is a pretty decent analogy for Sepultura’s set in general.

The Brazilian quartet have half an hour to remind the people of Download why they were considered one of the greatest bands on in metal at one point, and, although it’s too much to expect them to match those previous heights, this is a great performance when based on nothing more than what you see up on the stage.

Greene is a fantastic frontman, huge of frame and voice and with eyes bulging with intensity, and he has the perfect foil in a guitarist as dexterous as Andreas Kisser. Then there are the songs, Arise and Ratamahatta obviously get the whole crowd moving but the newer songs from latest album The Hand Mediator Between Head And Hands Must Be The Heart sound much better live than on record.

They end, predictably but spectacularly, with Roots Bloody Roots having proved that they are still a very fine metal band. (7) (SH)

Following Sepultura are the Swedish battle metallers Sabaton, who are as much a part of the UK summer festival experience as rain and mud. The way they’re effortlessly able to get the respectably-sized crowd all jumping under the grey miserable skies today is admirable, as is their commitment to playing the war-themed, stomping battle anthems Carolus Rex and Ghost Division with conviction and just a bit of silliness.

Grinning ear to ear, affable singer Joakim Brodén laments the distance between them and the audience and says “fuck it, I’m coming down” as he jumps off stage and gets in amongst the fans. Somewhat surprisingly a pit opens up during super-catchy live favourite Primo Victoria, proving that for all the comedic value they bring, they’ve also got the metal tunes to back it. (7) (CM)