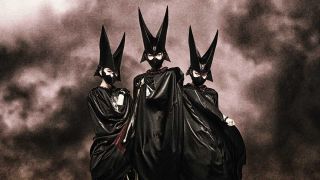 I’ll level with you: I bloody love Babymetal. I realise that they are a band that consistently polarises opinion and that sends a small minority of metal purists into a state of incandescent fury, but I think they’re fucking great: stupidly entertaining live, always surprisingly brutal on record and, assuming you have a sense of humour, endearingly batshit crazy, both in theory and practice. And, since you ask, the number one reason why I will take Babymetal over any number of supposedly heavy bands that incorporate “pop” elements into their music is that Babymetal is wholly and solely based on artifice. You can’t be angry about a band using gimmicks when the band is the gimmick.

It’s a ridiculous idea, brought brilliantly to life. Sorry, folks, there isn’t really a Fox God. This whole insane escapade is about escapism, pure and simple, and it’s all the better for it. No one is making earnest claims about Babymetal’s authenticity or integrity either. It’s a preposterous collision between Japanese pop music and brutal modern metal, with an even more preposterous conceptual backstory. It’s entertainment. It’s fake. It’s fun. Cheer up and join in or don’t.

When it comes to Yuimetal’s departure from the band, I expect a lot of excitable dimwits to become needlessly hysterical and start whining that things will never be the same and OH NO IT’S THE END OF BABYMETAL WAH WAH WAH. My first thought is that everyone seems to have an enormous amount of time on their hands to be annoyed by minor life events, but then I just spent 25 minutes laughing at @memes_by_danko on Instagram, so I do sympathise to some degree.

Ultimately, though, Yuimetal leaving Babymetal is unlikely to make a shred of difference to the band’s future or their popularity. This is not Bruce quitting Maiden or Rob Halford leaving Priest, is it? It’s not even Head leaving Korn. Be sensible.

Aside from the likelihood that Yuimetal will be swiftly and seamlessly replaced, she was neither the band’s lead singer nor, as far as we are aware, a major contributor to the songwriting. Sadly I’m not currently available, but I’m sure the masterminds behind-the-scenes will be able to find someone suitable that can learn the dance routines and all the mad lyrics.

Personally, I wouldn’t be remotely bothered if Babymetal didn’t sing live at all and just appeared in holographic or CGI form, with the entire show on tape. The point of going to see Babymetal is not to bask in the organic, analogue glow of good, old-fashioned real music: it’s about going to have your face blown off by a ridiculous, high-concept light show to a soundtrack that sounds like vicious, techy metalcore re-imagined via Nintendo and LSD with the songs sung in a language you barely understand by three – or maybe even just two – intergalactic goth-pixies. And who doesn’t like the sound of that? As long as someone shows up, in the flesh or on screen, to sing the bloody tunes, all is well in the metal universe, surely? If all else fails, the Fox God will sort it. Don’t worry.