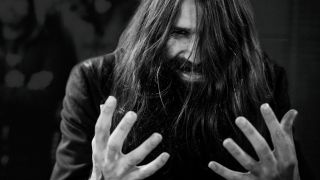 Eight years ago we probably envisioned that Dødheimsgard would be a household name by now. Having included such high-profile figures as Darkthrone’s Fenriz and Aura Noir’s Apollyon, the band were already a well-established name and their industrially flavoured 1999 opus, 666 International, had put them at the very cutting edge of black metal.

With the release of Supervillain Outcast – featuring Kvohst, aka Beastmilk and Hexvessel’s Mat McNerny, on vocals – in 2007, however, the band’s combination of strong songs and visuals pushed them through the genre’s glass ceiling. Precise and electronically augmented yet also spirited and soulful, Supervillain… was not only critically acclaimed but surprisingly accessible, boasting an arsenal of memorable riffs and melodies. /o:p

Sadly, as the years passed it became clear that the album wasn’t going to be granted a follow-up and, with live shows drying up and the band’s members involved in other projects, a large question mark was left floating above the group. Until now that is. Because finally an impressive – if challenging – new opus, A Umbra Omega, is with us and it even sees the return of co-founding member Aldrahn to boot.

But be warned; this isn’t the same band that created Supervillain… Not only has the lineup undergone a radical shift but so too has the group’s sound. While its predecessor was often immediate and catchy, A Umbra… requires a good deal more investment, its lengthy songs, averaging 12 minutes each, proving complex yet also stripped-down in comparison. In fact, the production is now almost austere in its restraint, with all traces of electronic and industrial influence notable by its absence./o:p

“I guess a misconception is that if you ever do electronics in metal, you’re the electronics guy,” begins mainman Yusaf ‘Vicotnik’ Parvez with a smile. “I like some electronic music but that doesn’t mean I don’t like organic music. I probably have a vaster collection of organic music, in fact. If 666 International and Supervillain… are stylised music with certain effects that give it colour or make it more niche, then this was a kind of metal attempt to have a more singer/songwriter approach to it – more bare, more naked, more down to the compositions themselves and with a dull production, so that won’t be a distraction. I wanted to go back to making music the focal point and maybe even make an album where people would think, ‘Oh this production isn’t really up to date’, but then five minutes into it not care, because the music is great.”

To go so far as to purposely make your record’s production less exciting demonstrates, if nothing else, a dedication to artistic values and, talking to Vicotnik in person, it quickly becomes clear that career potential is about as far from his mind as it’s possible to imagine. What’s interesting is that – perhaps accidentally – Dødheimsgard were a very commercially viable prospect for a time and one might have expected Vicotnik to have pushed that further, especially given that he had less-known side-projects as a creative outlet.

“It has to happen by accident, I guess,” laughs Vicotnik. “I’m from the school that didn’t have any ambitions for a career. There were no careers in extreme metal back then. It’s true – the last album could have been perceived as the band trying to push into a more commercial market but it wasn’t about that. I’d never made an album like that and wanted to try it: an album that was more based on choruses, accessible songwriting and structure and that was quite easy to represent live. That was more the drive rather than trying to sell more records.”/o:p

Vicotnik’s outlook is interesting. While many of his contemporaries have verbalized a degree of departure from the perceived limitations of black metal as their fanbase has expanded, he’s going the other way, nailing his colours to the mast of black metal. It’s all the more fascinating given that, musically speaking, he was one of the more avant-garde or progressive Norwegian artists who really pushed the definitions of what could be considered black metal in the first place.

“I guess it’s a reaction against the stuff that I feel is gimmicky,” he sighs. “To be part of this scene back in the day you had to put something on the table and show dedication, and today I don’t believe that dedication is running around burning churches. The loyalty to it is treating the genre with respect. I think we lost respect for our genre, our way of expressing art and made it into comedy in a way. I’m not saying a mainstream approach is a bad thing, it just didn’t feel right for me to venture further down that path.”

So does Vicotnik feel he was on the wrong path during the Supervillain… period? “Sure, in retrospect I do. I don’t feel it was deliberate because a lot of choices were made as we went, especially in terms of production. I’m happy with that album but I’m also finished with it. I have no need to go further down that road. I also think if I did go there, there would be tons of bands with the same expression, only better. So I guess I’m trying to put myself back into doing what I know best. If I start borrowing from other people in terms of production and song structure and how it should look and then finetune it into a more marketable product, I’m kind of selling out my own talent.”

One might expect then, that this album was fairly easy to make, given that commercial appeal was irrelevant and the only criteria for inclusion was Vicotnik’s own tastes. And yet it took eight years to see the light of day; even taking his work in Code, Strid and Naer Mataron into consideration, that’s a hell of a long time…

“It almost killed me,” Vicotnik sighs. “It’s a very personal album and it took a lot out of me revisiting my understanding of things that’ve formed me for the last 20-plus years. Where does the level of confessional poetry go and where do you let the music and lyrics have a life of their own? It was a new approach for me. You’re not taking inspiration that’s out there, you’re trying to pull it out of yourself, and that’s hard. My first 30 songs probably sounded like Supervillain… part two, so I needed that long hibernation where I could just go deep into it.

“There’s no good way of explaining it without sounding like a total dick – you know, ‘I sit alone and I spend this much time by myself…’, but that’s the truth. I wanted to make an album I could be proud of regardless. If it gets totally slaughtered it doesn’t really matter, because I spent so much time trying to reach what I wanted to reach.”

A UMBRA OMEGA IS RELEASED ON MARCH 16 VIA PEACEVILLE/o:p