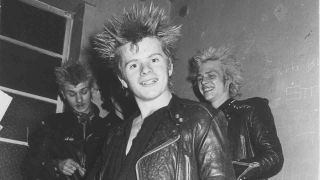 By 1982, everyone thought punk was dead. After the ’77 boom, the genre had stagnated, and the bands were considered irrelevant laughing stocks. But deep underground, its corpse was twitching, and from the rotten, putrid sludge of punk rose a band that inspired the next generation of both metal and punk rock kids to make a new type of noise. This is how Discharge’s debut album, Hear Nothing See Nothing Say Nothing, upped the ante.

Formed in 1977 in Stoke-on-Trent, there was no signal Discharge would make a sizable dent in heavy music. They were, as founding guitarist Tony ‘Bones’ Roberts puts it, “Just listening to The Clash and the Sex Pistols and having a go at doing that.”

After a series of rudimentary EPs and singles, and numerous line-up changes in their early years, they found a home in the anarcho-punk scene of the early 80s – a small but dedicated haven for individuals who refused to give up on punk’s ethics.

“It was a lifestyle that was different, exciting,” says then-drummer Garry Maloney, who joined the band a year before the release of Hear Nothing… “Likeminded people hanging out and going to gigs. It was brilliant. From my first show, seeing The Damned at Barbarella’s in Birmingham, to a few years later watching Black Flag soundcheck sitting on my flight case, I loved it all.”

Discharge continued to evolve, beefing up their sound while also trimming the fat. When they went into the studio to record their debut full-length, they were armed with a set of songs that would shift the goalposts of extremity. “We really hit on something around that time,” Bones tells us. “We had gone from sounding like a normal punk band into sounding like something else. It was all natural, though. We never tried to sound a certain way; we just started writing sounds about how we felt, and we felt like how that record sounded.”

The sound of how Discharge felt was alarming, even to fans of extreme music. Songs were short, inhumanly loud, full of violent and brutal images of war and human devastation and, crucially, driven by the now infamous ‘D-beat’ drum pattern. “Well, that wasn’t really my thing,” shrugs Garry, crediting original member (and current guitarist) Terence ‘Tezz’ Roberts with initiating the style. “But I did make a point of playing what felt right for me. It was slightly different to the original singles, which was intentional I guess.”

“That drum beat changes the way you play,” Bones adds. “You can’t help but get excited by the sound of it. That’d be the basis of what we’d start with, and it makes everything feel so much more urgent, and I definitely reacted to that.”

Another key component of Hear Nothing… was thematic, with the band’s disgust at Thatcherite Britain, paranoia from the threat of nuclear war and humanity’s self-destructive tendencies all distilled into a series of brutally blunt slogans. The title track repeats the lines: ‘Lied to, threatened, cheated and deceived / Hear nothing see nothing say nothing / Led up garden paths and into blind alleys / Hear nothing see nothing say nothing.’

“I’ve realised how much I’ve been influenced by what I call ‘The Discharge haiku’,” says Neurosis frontman and Discharge super-fan, Steve Von Till. “It’s like a strange style of poetry – these short images of war and political deception. Unlike their earlier records, most songs were four lines, tops, but they say so much. It makes it epic, and you can apply them to your own time.”

As Steve points out, sadly, the album’s themes are as relevant as ever. “It was shit back then and we were all pissed off about it,” growls Bones. “It’s even fucking worse now.”

“The threat of war and government law is still out there,” Garry adds. “They are threats that keep us all in line.”

As the first signings to Clay, the Stoke-On-Trent-based label run out of a local record shop, the band were not afforded much time in the studio, instead “getting it out in one take or so, like we always did,” according to Bones. Regardless, the results were staggering. In around 25 minutes, Discharge had chewed up GBH, Motörhead, Venom and their own unique brand of nihilism and spat it back out into the world’s face. Hear Nothing… would be a watershed moment; at a time when punk and metal were mortal enemies, they blurred the lines completely.

“I was into metal at the time,” Steve Von Till tells us. “This was before I found punk. But when the punks started telling us metal guys that we should listen to this album, we were intrigued.”

The band themselves had no idea what they had achieved. “It wasn’t planned,” says Garry. “I just thought it was super-cool and turned it up full blast and was off in a little world of my own. It just evolved from the music we were listening to and our punk roots.”

Initially, the record was met with confusion and some hostility. That all changed when the band were adopted by the UK’s ultimate taste-maker. “I’m not sure everyone got it at first, because they didn’t know if we were punk or metal,” Bones sniffs. “I’ve never cared about any of that stuff personally. But then John Peel played us on Radio 1 and, I mean, wow! That was a real honour. Things changed from then; I would go down the pub and people would be telling me they heard us on the radio. We got a real boost from that.”

The record’s reputation started to build, with both punk rockers and metal fans becoming intrigued by this infamous new band. “I saw the cover and it looked so weird that I thought, ‘I gotta try that’,” says Steve. “I got it home and, the second the needle dropped, I felt like it was the sound I’d been searching for my whole life. It blew my mind wide open and changed my life. It had the guitars I wanted and that bass was so crushing.”

The influence on thrash and cross- over was meteoric, and within a few years D-beat even became known as its own subgenre, as hundreds of bands from all over the world tried (and mostly failed) to recreate the iconic sound. Many even adopted the ‘Dis’-prefix in their name; plagiarism had never been so shameless. “Good luck to them,” shrugs Garry.

“I can’t tell you anything about any of those bands,” snorts Bones. “I don’t listen to music… never have. If you do, you get influenced by it. I want to sound like myself and what’s going on in my head. But it’s nice that people have been influenced by us. A few years ago we played The Underworld in London, and Metallica came down to see us before they played the O2. That was alright.”

The best bands were those who took Discharge’s ethos and pushed it further. “What’s more interesting to me is when people try to find their own original voice of intensity,” says Steve. “I can tell you for a fact that there’d be no Neurosis without Discharge. The way they influenced us was that they sounded like screams of anguish, screams of war, screams of where humanity is headed – they were perfect for that. So, if we want to contemplate the existential nature of humanity to find its struggle amongst nature, how can we sound like that? How can we embody those themes? That’s how I hope they would influence people, rather than copying a style.”

Songs from Hear Nothing… have been covered by everyone from Metallica to Sepultura to Machine Head to Anthrax, and there’s no doubt its legacy is set in stone. “I still smile when I see the artwork,” says Garry. “It was an ‘all the planets in alignment’ moment. Every track a killer.”

“There are some of our records that I can’t listen to,” Bones tells us. “Not this one. It’s just got something about it, hasn’t it? A magic that you can’t explain… it’s timeless.”

Published in Metal Hammer #333. Protest And Survive - The Anthology is out now