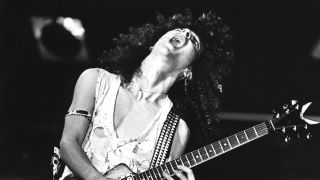 Such was the impact of Dimebag Darrell’s extraordinary musical gifts on our world that we could be forgiven for imagining that this legendary six-string wizard was actually born with a guitar in his hand and the skills to make it sing. The truth isn’t too far away from that vision, however. Having come from an intensely music-driven background and strongly influenced by their father Jerry’s passion for country music, both Darrell and his drumming brother Vinnie were plainly destined to throw themselves wholeheartedly into the rock’n’roll realm.

Pantera began in earnest in 1982 in Arlington, Texas, when the Abbott brothers focused their nascent plans for world domination and joined forces with fellow high school students Terry Glaze and Rex Brown, on vocals and bass respectively. Initially, at least, Pantera were just another high school band with dreams of glory and only a rudimentary grasp of the technical skill required to propel themselves to popularity, but as Terry Glaze recalls, that all changed when Darrell hit his stride.

“You know, Darrell was just a kid with a guitar at the very beginning,” he recalls. “But at some point he disappeared into his bedroom for, like, six months. When he came out he could play Eruption by Van Halen, note for note. That’s when I realised he had the potential to be something special. No other young band in Texas had a guitarist that could play like Darrell. There were a lot of great bands and musicians, but he was on a different level.”

Ably supported by Jerry Abbott, Pantera spent the next few years gigging relentlessly across Texas, Oklahoma and Louisiana, playing to anyone and everyone that would give them a shot – in either sense of the word – and building a fearsome reputation along the way. Although somewhat primitive and derivative, the band’s first two albums, Metal Magic and Projects In The Jungle, added plenty of fuel to their formative fire while hinting at a future beyond the glitzy hard rock that had been the bedrock of Pantera’s sound in those early years.

“We all loved Van Halen and Kiss and all that stuff,” says Terry. “We loved the first Def Leppard album, so that was a great starting point, too, and I guess we were that kind of band, but you could always hear that what Darrell was doing was a bit heavier than the other bands that were doing similar things. We started listening to a lot of Iron Maiden and Metallica. Darrell was evolving all the time, Vinnie was such a great drummer, too, and we kept growing as a band. It was exciting being part of that.”

A third album, I Am The Night, was released in 1985. By that point it was clear that Darrell’s skills as a musician and songwriter were, aptly enough, hitting a new level, and Pantera were beginning to be talked about further afield than the local circuit they had long since claimed as their own. But what continued to drive the band forward more than anything else was Darrell Abbott’s insatiable appetite for playing the guitar.

“To be honest, when I think about Darrell I have trouble remembering him without a guitar in his hand,” Terry notes. “I have fond memories of driving to shows in the van. Vinnie would drive, I would sit next to him and Darrell would be in the backseat, always with his guitar, playing through a tiny amp and just wailing. He was completely dedicated to his instrument,

While it is arguable that Pantera’s early albums are often airbrushed from the band’s history – a testament, of course, to the sheer revolutionary impact of 1991’s Cowboys From Hell – there is little doubt that his prolonged apprenticeship and all the blood, sweat and tears that went into perfecting his trade enabled Dimebag to reach his full potential at a young age. The departure of Terry and the arrival of Phil Anselmo for 1988’s Power Metal signified another crucial piece of the Pantera puzzle, of course, but as Terry is eager to stress, the musical magic that poured out of Dimebag was there from the very beginning.

“Darrell was like a secret weapon. No one else in Texas had a guitarist that good, he always had that stage presence and the crowds would go crazy for him every time. I loved every minute of being on stage with him and making music with him. We all did. We were so young and it was a steep learning curve but we had so much confidence, you know? I’ve had a good career playing with some great musicians, but no one has ever come close to Darrell. I feel very honoured to have had that opportunity. He was a one-off, for sure.”

The Pantera Quiz: A Vulgar Display Of Knowledge