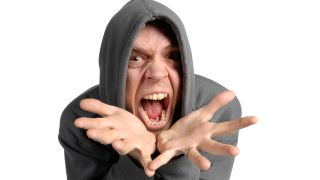 The Dark Crystal: Age of Resistance, the highly anticipated prequel series to Jim Henson's iconic 1982 fantasy film, The Dark Crystal has launched on Netflix – and we are pretty excited about it!

In celebration of this release we thought we'd chat to the flick's biggest fan, who also happens to be a pretty big deal in the world of metal: the puppet-loving Canadian singer-songwriter, Mr Devin Townsend, of course.

His love for the dark fantasy film is well documented, particularly thanks to his band, Strapping Young Lad having a song named for The Dark Crystal's creepy antagonists: Skeksis.

Devin has also admitted Ziltoid the Omniscient was based on the characters from The Dark Crystal, but what else has the fantastical animated puppet movie inspired? And will he be watching the new series? We found out...

When did you first watch The Dark Crystal?

"I saw it in and around the release date. I had seen a preview for it at another movie (The Black Hole) as a kid, and was immediately fascinated. I saw it either on release day, or at the very least, release week."

Were you a fan of puppets and Jim Henson prior to watching the movie?

"Not actively... I had seen The Muppet Show, but it was a passing interest, at best."

How has the film influenced you as a person and as a performer – and why?

"Man, I can't overstate how that movie affected me. I was probably 8 years old at the time, and the juxtaposition between good and evil was just really engaging.

"I think as well, the artistry that went into making that film was ultimately quite selfish on the part of the creators, which I just loved... the idea of investing such resource into a singular and obscure vision inspires me to this day.

"The music was hugely inspiring as well, melodically, Trevor Jones did things with orchestral music that were very new to me at the time. The suspensions and darkness was really appealing.

"I loved the aesthetics of the costumes and the colours of the sets as well. Undoubtedly on some level, the romance appealed to me as a young boy as well."

Other than the obvious track (Skeksis) are there any other songs were you have referenced The Dark Crystal that people might not know about?

"In the song Gato from Ki, the guitar solo melody is directly taken from the main theme of The Dark Crystal."

Who is your favourite Dark Crystal character?

"I think I related to the Ur-Ru characters the most. As much as I liked the lead characters and the dark characters, there was something hugely appealing about the calm and 'beige' vibe of those creatures to me."

Are you going to be watching the new Dark Crystal Netflix series?

"Ah... I'll probably watch it, yeah. But to be honest, it was such an impactful experience for me as a child, that in absence of Jim Henson, I'm certainly skeptical.

"Although I don't feel the original dialogue or voices really stood the test of time, the impact on me was undeniable and so I admit I'm a bit tentative.

"However, I felt the same way about the recent Blade Runner sequel, and that was surprisingly good... So..."

The Dark Crystal: Age of Resistance is now streaming on Netflix