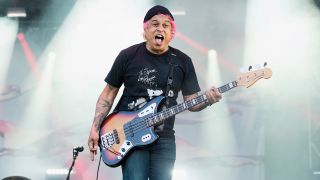 I got into Crass as an early teen. I first saw their logo on a jacket. It was the strongest icon ever and now I have it as a tattoo.

The things they spoke about directly correlated to the life I had just started to enter, which was Lower Manhattan left wing politics and things which were specifically linked to the economic divide.

A lot of my best friends were involved in the Lower Manhattan squatter movement. They took over warehouse buildings and got free housing, not only for themselves but for people in the neighbourhood who were getting squeezed out.

I learned that it’s not so much about your ethnicity or culture, it’s more about your economic standing and the station you have within that, and how that really impacts things. Crass were the first band I heard who spoke about that. Part of the reason that people who are in a lower economic station are taught not to see it on that level; if you’re white, you’re taught that people who are darker are taking your jobs. If you’re dark, you’re taught that people who are white are keeping you down. What’s really happening is that the people on the top tier are dividing everyone below and eroding their opportunities, education and experience. They don’t have a hope.

I have all my Crass albums on vinyl. I used to go to a place called Bleecker Bob’s on Bleecker Street. I’d get my allowance, then I’d go to the store and buy Crass records. One of the first albums that really grabbed me was Penis Envy, the reason being that I was primarily raised by my mother and women in my family. Every time there’s a female voice leading the charge and talking about struggle, it’s a lot more relatable and I get it. When guys are talking about their struggles, I feel a lot of it is a cop out. They have the social construct in their favour.

My mother’s very political. She’s an author and more of a cultural activist. When I came home with their records – and bands like Flux Of Pink Indians, Conflict and Discharge – and my mother was like, ‘What is this?’.

I gave her a presentation about the band in our living room. I was 16. I wrote down their lyrics and explained to her how this struggle is her struggle and our struggle. She bought it and she’d helped me with my mohawk! It was such a big deal. Crass shaped my diet and refined my worldview, which has stayed with me to this day. I’m a vegan because of Crass.

Crass were saying things that were real. The lyric ‘Jesus died for his own sins, not mine’ [from Reality Asylum] was heavy, but they were speaking truth to power. They shaking up a system which has people accept their fate and their position, and blame themselves for their lack of opportunity and upward mobility.

The US is at a heavy crossroads where we have a Presidential candidate who believes that democracy is a hindrance. He doesn’t say it, but it’s true. He’s baiting poor white people with racism.

It’s easy, because from my viewpoint, since the 80s, the right-wing have been eroding people’s educational opportunities. When you don’t have education, you don’t have empathy and you’re ripe for any damn bullshit. It’s happening everywhere and people are exploiting that and it’s constructing a false narrative that people buy into. Crass are still relevant to me today because they cut against that and just said it. They didn’t address things in a roundabout way. They didn’t allude to anything.

It’s not like they’re not much better than the Republicans, but the Democratic Party seem like they’re slightly more willing to give people a shot. They’re less condescending to their constituents and they’re pliable to what Bernie Sanders has done and what the youth have done; they’ve been exposed via the internet and have become open-minded and further left. It’s the better way to be; it’s more inclusive and more opportunistic. The future is to the left.

It makes me sad that people are buying into Trump’s rhetoric because they’re voting against their interests and voting against their future. Hillary’s not without her problems. She’s invested in Wall Street and she’s far more hawkish, but she’s been pulled to the left because of what Bernie Sanders has done and recognises where people are at. She’s always wanted that position and power, but she’s a lot more flexible in what her approach will be.

It’s not a choice between the Devil and the deep blue sea, but given what’s going on it all points back to Crass. They’ve been talking about this since the 70s and it’s still sadly relevant today.

Watch the Crass documentary, There Is No Authority But Yourself here.

'There are those who aren't supposed to die…'