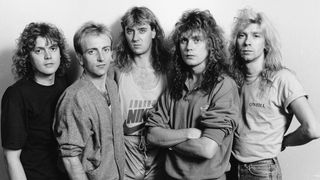 Its genesis was famously tortured, its budget astronomical, its sound as pristine as it was painstakingly assembled. Here’s how Hysteria’s component parts rank, from bottom to top.

Even the best have filler, and as we entered the era of the CD, albums got longer… no more of your eight-tracks-over-and-out that defined some 70s classics. Despite Mutt Lange’s joyous rendering of Excitable’s chorus, it’s simply overpowered by the glories that have come before. The BulletBoys would have killed to write a hook like it, but by the towering standards of Hysteria, it’s a cheap-knock-off.

As with several of the tunes that occupy the latter stages of the record, Don’t Shoot Shotgun has the ring of something that has come before, in this case a hint of Armageddon It to a mid-verse riff, and it’s also in part an AC/DC pastiche, albeit subtly done. Still works though…

Again, Leppard’s throwaway would be a lesser band’s golden ticket – many hundreds of hair metal albums dragged past without a hook as deadly as Run Riot. Yet like Excitable it’s a mid-leveller that would not have made the cut had Hysteria’s playing time been fifteen minutes shorter.

The song that closes Hysteria also feels the weight of what has gone before, a heavier, speedier, less sensual version of the title track. It’s still catchier than a Spinal Tap coldsore, but Hysteria demands to be judged by the very highest standards.

What’s wrong with being sexy? The aforementioned Nigel Tufnel’s immortal question haunts Women, Hysteria’s opener. Some of the record’s punning and wordplay works terrifically well, but ‘women, women, lots of pretty women/men, men we can’t live without them’ is more Dana Strum than Def Leppard. That objection aside, as a sonic statement of intent Lange throws everything at the album’s first minute or so, the digital crunch of the guitars harmonised perfectly with deep, subtle synths and layer upon layer of back-notes.

Hysteria began to head into stone-cold classic territory with ‘Rocket’, a song designed for radio with its giant gang-vocal chorus, made superior by the beauty of the sound – everything from Rick Allen’s drums on the intro to the multi-tracked vocal that renders the line ‘I’ll be your satellite of love’ as a single mellifluous word, is chillingly perfect.

Strange that a song of such quality sits only in the middle of the pack, but such are the delights remaining that Gods Of War often gets lost in the shuffle. The chorus is supreme, easily an equal melodically to Armageddon It or Pour Some Sugar…, yet Lange, perhaps conscious of the overall dynamic of the record, chooses to accent it differently, a tonal change that adds a classic, cooler touch.

That gloriously memorable ascent from verse (‘Hey, but are you getting it…’) to bridge (‘gimme all of your lovin’) to punning chorus line (‘Armageddon it’) is pure gold, a synthesis of all that Leppard were about, from shimmering guitar arpeggios to flat-out bludgeon riffola. So ‘C’mon Steve…’

Lange was a maestro of the power ballad (what else would you expect from a man who’d steered the immaculate sounds of The Cars and Foreigner) and here he took the essential formula and constructed Def Leppard’s edgier version. It was a definite twist, with an acid-tongued lyric playing against the immaculate soundscape, and built for night-time radio.

3. Pour Some Sugar On Me

The legend goes that Joe Elliott teased the riff for ‘Pour Some Sugar…’ out of an old acoustic guitar during a production break very near the completion of Hysteria. That riff has earned its corn ever since: Pour Some Sugar… is reputed to be the hit that finally enabled Leppard to recoup the cost of four years in the studio. Dressed to perfection by Lange, it was impossible to live through the late 1980s without having this chorus in your head for days on end.

As the decades have passed, it has become apparent that Hysteria’s lowest-key and least bombastic song has given the record its timeless edge. Here is a simply magnificent piece of work, smoky, sultry, full of grown-up yearning. Hysteria is the moment that Def Leppard made their bones as classic writers.

If a single tune encompassed both the difficulty and the glory of making Hysteria, it was its breakout song. Written in 1984, tortuously assembled over the next two and half years, it’s a tribute to the band and Lange’s never-say-die perfectionism. Animal simply reached out of the sound system and pulled you in head-first, sonically pure, as slick as anything written by Journey but with claws of its own, it was a summation of both band and the age it emerged into.

Def Leppard: How we made Hysteria