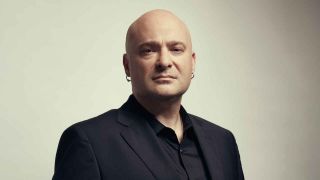 Since shooting to fame on the back of their 2000 debut album The Sickness, Disturbed have become one of modern metal’s greatest success stories. Yet charismatic frontman David Draiman is also one of the most divisive figures around – the singer has his fair share of vocal detractors, not least in the press. So thought we’d give you lot the chance to grill him instead. Would the good people of the Hammer readership give our Dave safe passage?

Did you get any feedback from Simon & Garfunkel after The Sound Of Silence? Ken Johnson, Twitter

“When we were a week or so our from our live performance of The Sound Of Silence on Conan, our manager contacted me and asked if it was alright for him to give my email address to Paul Simon’s manager. He had expressed an interest in contacting me. I said of course he could and then waited like a nervous child. He wrote: ‘David, really powerful performance on Conan the other day. First time I’d seen you do it live. Nice. Thanks. Paul.’ We were a few hours away from performing when I got the email, and I ran around backstage to anyone who’d care to look at Paul’s praise! He liked it so much that he talked about it repeatedly in interviews and even put our Conan performance on his own social media pages!”

“Ride the Lightning. I’d never heard such complexity, power, depth, ferocity and beauty melded together before. Fade To Black is perhaps my favourite Metallica song. It’s such a truly epic record.”

Are there any other unexpected artists you’d like Disturbed to cover?

“We don’t premeditate when it comes to choosing covers – we leave choosing them for the last part of the recording process each time we go in the studio. The covers are fun for us. They’re a different challenge each time. How to keep the integrity of the original song but still make it your own? Not planning ahead when it comes to our selection is part of the challenge and fun of it.”

What’s your favourite part of touring? Any bands you wanna tour with?

“It’s always all about the show. We are truly addicted to the live experience… all of us. Everything else is just travel and coming up with ways to keep yourself sane or pass the time until the next show. We’d still love to do a proper tour with Metallica or Iron Maiden one day. Tool and Rammstein are on the wishlist as well. Foo Fighters, too!”

How can metal bands break the mainstream these days? Kenner Smith, Facebook

“I truly wish I knew. There is no ‘secret’ to success. Not now, nor was there ever. No magical equation that if you follow to a T, will ensure that you get your big break. All any musician can do, in any era, is write the best songs they possibly can, and play them with all of their hearts and souls every time they take the stage. Promote your asses off, don’t be lazy, don’t expect anyone to hand anything to you. Take it seriously, perfect your craft. Learn to navigate the waters you are hoping to sail in by aligning yourself with trustworthy, wise individuals who can not only help guide you to the promised land, but you can learn from along the way. Bust your asses, and with determination, talent, wisdom and a whole shit-ton of luck, you might just make it.”

Do you get people making monkey noises at you in the street?  Alex Holaifa, email

“More often than you might think, to be honest. One of my favourites was when I was at a mall somewhere on tour, and this little boy, couldn’t have been more than three or four years old, ran up to me, wrapped his arms and legs around my leg, looked up at me and shouted, ‘Ooh wah ah ah ah!’ I was dying laughing, it was so sweet. His parents came running up, apologising to me, which I told them was absolutely unnecessary. I took pictures with them and thanked them.”

If an alien came down to Earth what three things would you show him to explain the human race? Jackie Warren, Facebook

“I’d show them Twitter, and I’d hope they’d do the wise thing at that point. Leave us in our misery and travel back to their home world as fast as possible.”

Best advice you can give to all the aspiring musicians out there who want a career in the music industry? @rocknroro, Twitter

“Try finding another profession. Ha ha! Seriously though, it’s as tough as it’s ever been. Competition is everywhere, and the internet barrages the consumer with stimuli. It’s information overload. Technology has made it easier for musicians to get their music to people, but because of the ease of its pathway, there are more people doing it than ever. If you’re going to give it a try, be prepared to give it all you’ve got. To risk sacrificing everything else, because sometimes, that’s what it takes.”

If you weren’t fronting Disturbed what would you be doing with your life right now? Jenna Gardner, email

“I’d probably still be a Health Care Administrator. I worked as one for about six years prior to getting signed. It was a heartbreaking job at times, getting close to people you are caring for only to see them leave the world too soon every time. Families taking advantage of their loved ones, stealing from them or defrauding them, neglectful or even abusive nurses and aides, and trying to make a profitable business from managing people’s health. It was rewarding helping everyone I could, but depressing at the same time.”

What do you say to those people who claim that “rock is dead”? @RockMetalMLover, Twitter

“Nonsense. We just finished our most successful arena run of our careers here in the USA on the first leg of our Evolution tour. Shinedown, Five Finger Death Punch and many others are either doing or coming off of successful arena runs themselves. The biggest festivals in the world are dominated by rock bands, and Metallica, Iron Maiden, AC/DC and Guns N’ Roses are still selling out stadiums. Newer bands like Nothing More, Greta Van Fleet, Bring Me The Horizon, The 1975, The Struts, and others are very strong representatives of a new generation of rock that have massive fan bases which are growing with each passing day. Dead? To whom?”

If you could have experimented with another genre and get away with it what would your sound be? @drum_by, Twitter

“I think we just did on Evolution. I’m not sure what ‘genre’ some of our new material falls into, but it certainly isn’t stereotypically Disturbed. Call it a more classic rock feel, or balladry, but it was definitely experimentation, and I couldn’t be happier that we did.”

“I’m an avid scuba diver – I’ve been on over 450 dives – and one of the perks of travelling the world on tour is being able to set aside the time to dive in some of the most amazing places in the world. The Maldives, the Great Barrier Reef, the Red Sea, all over the Caribbean, Hawaii, Fiji, to name a few. As far as underwater life is concerned, the bigger the better for me. I love encountering large pelagic life, and I love sharks. Some of the most spectacular dives I’ve been privileged to go on were open water shark dives. I just did one not too long ago in Fiji at about 80+ft with 10-15 bull sharks in a feeding frenzy! It was amazing!”