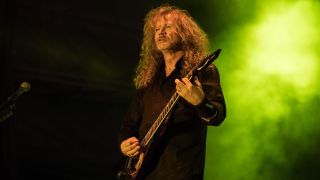 It’s been a good year for Megadeth. Earlier this year they won their first ever Grammy for Best Metal Performance and went on to tour latest album Dystopia in all four corners of the world, taking in the USA, Japan, Europe and central Asia. We meet Dave in his dressing room backstage at Bloodstock festival in the UK, as Megadeth prepare to headline the final day of the heavy metal weekender.

Chilling out on a leather sofa, as the muffled sounds of Skindred owning the main stage vibrate through the walls, Dave is all smiles, far removed from the diva-esque reputation often associated with one of the godfathers of thrash. Headlining the festival for the second time in Megadeth’s career, Dave tells us that it’s a “fun, familiar feeling” to be back in Derbyshire, not only because of his work here with Andy Sneap on United Abominations, but also how “badass” it is to play a “genre-specific metal festival.”

But how does it feel to be an elder statesman of heavy metal and where are Megadeth in 2017? And what really makes him happy these days? We sat down with the man himself to find out.

You guys have been on tour for months now doing festivals around the world, including playing Malaysia for the first time. How was that for you?

“Believe it or not it was wonderful. I got a message from David Draiman in Disturbed and he said ‘Hey, be careful brother.’ I didn’t know if he playing with me. He said there’s a young guy, a leader of a youth group out there, that were not down with [Megadeth playing]. So I said out of respect for Malaysia, their government and their faith, that I’ll look into it.

“When we played China for the first time, we had two shows. Shanghai said we could play 13 songs, Beijing said we could only play eight because they took objection to our music and some other things. But rather than skip playing China altogether, I figured I will go. I’m not going to bitch about what I can’t do, I’m going to scream from the mountain tops what I can do.

“We went there and played eight songs, then the next time we went there we played our full set. It just shows that when you have someone with respect for our genre, who is intelligent and goes in there and gets the job done, we open doors. I think it’s great now because China is a market that has opened to even more bands.”

You’ve been doing this almost your entire life. Where do you see yourself in the world of metal?

“I see myself fitting very comfortably in the centre of the roof ha ha! I don’t feel like I need to walk around the edge any more to get attention, I’m happy with who I am. I have a very successful band, I’ve had a great career. Between the band I’m in now and the band I founded before, the two of us have sold a combined nearly 80 million records from my music. That’s a lot of stuff.

“There’s a lot of people who don’t like me because of who they think I am, because they don’t know me, and that used to really bug me. I wanted to be understood, but now I’ve got to this point where I don’t worry about it because I’m not going to change anybody’s mind. I just go out and play, be the best guy I can be, and try not to piss people off in the process. Make people happy. Some people in thrash metal can’t be happy because they want to be angry, that gets them off. Not me, I like being happy.”

What makes you happy?

“Being pissed off! I’m just kidding. Yesterday we were in Spain hanging out with the guys from UFO who were a band I loved when I was a kid. The day before that, Arch Enemy were there. A couple of days before that I saw Cristina from Lacuna Coil in Milan. These friendships are so beautiful, they’re all around the world, they’re with people that are really interesting and unique. If I didn’t have my job and I wasn’t who I was, if I had a friendship with these really interesting people then that’s bitchin’.”

Are you a man who gets nostalgic and looks back to the 80s/90s, or are you always looking forward?

“I’m very proud of what we’ve done, but I don’t yearn for it, it’s not something I want to go back to. There are so many things that are better now, albeit there are things that are worse in civilisation – stress, pressure, financial insecurity, disease, crime… As far as our music is concerned, I think it’s got better.

“I look back at the guitar playing before I had my little walk in the park with the guys in Metallica, and it was different because there were these great guitar players but nobody knew who they were. We were just listening to Hocus Pocus by Focus and it’s a fucking shredding song, but how come nobody knew about that song? Motörhead were out before Megadeth was, so why don’t people call that thrash metal? Priest is considered heavy metal. I love Judas Priest but they’re not considered thrash. Thrash is a way of life for me where you just let it all hang out.”

Do you think metal will ever return to being as popular as it was back then?

“I think it could, but there are two very bad things happening in our little world. It’s the mudslinging, shit-talking websites and it’s the trend that it’s cool to hate bands that you’re not in. I don’t think I’ve ever named a band that I don’t like. And as far as the websites that say bad stuff about people, I don’t get why people even go there.

“I remember when we first started in Metallica, the music magazines would come and it was so important to us what was in there. It wasn’t until Malcolm Dome and a couple of other guys started to get really popular that the face of the magazine changed a little bit, and then you started to see certain writers becoming more important than the people they were covering. It was no longer music news, it became music op ed. I don’t mind hearing a review of a record, but for all the interviews to be sprinkled with all this shit-talking about the artist, that ain’t cool man, who do you think you are?

“When I was in Japan hosting the Classic Rock Awards, Jimmy Page was there and Jimmy’s one of my heroes. The thought of me doing an interview with him and insulting him, or trying to see how I can make him look bad during an interview… why would you interview somebody if that was your purpose?”

Throughout your career you’ve written socially-conscious lyrics about what’s happening in the world around you. How important is it to you to write about these subjects?

“I think if you go through life looking down at the ground then you’re going to miss so many opportunities. History is very important. You can predict what’s gonna happen with world events if you pay attention. You can watch the numbers, you can see things ratcheting up, you can watch the temperament of the Middle East going up and down.

“I just got done reading The Art Of War again for the umpteenth time and I love strategy. Watching the way these world leaders work and compete. In my martial art background, I was training with a guy who was half Mexican and half Native American and we’ve had so many conversations about the Native American way of life and how they would combat when the Chief got too old to physically fight, and it would become a mental war. I love that stuff!”

Megadeth’s Dave Mustaine: The 10 Albums That Changed My Life