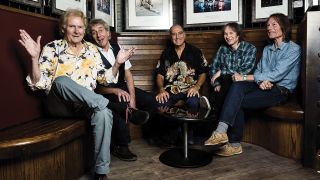 When Dave Cousins answers the phone to Prog, he sounds in good spirits. And so he should be, given that the conversation occurs just ahead of Strawbs’ UK tour, and as preparations for another jaunt to the USA in November are completed ahead of the release of The Ferryman’s Curse, the first new studio album by Strawbs in eight years.

His adventures in geography, both recent and long ago, tend to feature in any chat with Cousins, who turns 73 in January 2018. A natural storyteller, when Cousins is asked about a particular song, he’ll invariably refer to the location where an idea for the tune or lyric came to him.

Having penned between 250 and 300 songs over several decades, he’s covered a lot of ground. Alongside various towns and cities around the UK, places as diverse as Egypt, the Czech Republic, Italy, America, and Scandinavia all crop up as he talks.

“A friend of mine who owned a shop in Copenhagen had a man come in who put his hands on the counter and said to him, ‘Hi, I’m Jesus.’ So that gave me the idea that if Jesus came back, what would he do to make himself recognised? I’m not religious but I wondered what would happen in that instance and whether people would accept Him if he did return,” Cousins says of The Man Who Called Himself Jesus, which appeared on Strawbs self-titled 1969 debut.

Subsequent albums such as Dragonfly (1970), From The Witchwood (1971), Grave New World (1972), Bursting At The Seams (1973), Hero And Heroine (1974) and Ghosts (1975) not only saw Cousins emerge as a writer frequently referencing moral, ethical and spiritual dilemmas within his work, but they also reflected an astonishing powerful musical development as line-ups changed. Strawbs’ move from being a largely acoustic, folk-based outfit to an overtly progressive rock act with all Mellotrons blazing felt natural, Cousins says, and was something their fan base was happy to go along with. When Bob Dylan plugged in and turned up the volume, there was a cry of ‘Judas!’ Not so in Strawbs’ case.

“When we first started we were playing in a folk club I was running at The White Bear pub in Kingsley Road, Hounslow. When we added Rick Wakeman to the line-up, our sound changed. Gradually we started touring with Roy Harper, but people grew with us. There were no fans protesting about it. They liked where we were going musically.”

Building on the success of the Cousins-penned Lay Down and the infamous Part Of The Union, written by Richard Hudson and John Ford, which peaked at No.2 in the UK chart, Strawbs entered their most obvious progressive rock phase – one that would be consolidated with Hero And Heroine and Ghosts, the latter enjoying US chart success.

“We were at the top of the second division, I always call it, although I was told that in New York especially we were considered to be in the first division of the top 20 bands visiting at that time,” Cousins says. “The thing is, we never consciously sat down and said, ‘This week we’re going to be a pop band, or a rock band.’ Strawbs was and is continual evolution. Bringing Dave Bainbridge into the band means we’re evolving into something different again.”

The mention of keyboard player and guitarist Dave Bainbridge, probably best known for his band Iona, as a relatively recent recruit to Strawbs not only excites Cousins but also reminds us that the group have exercised good judgment when it comes to those who tickle the ivories and twiddle the knobs. After Rick Wakeman, the likes of Blue Weaver, John Hawken, famed Nick Drake orchestrator Robert Kirby, Oliver Wakeman, Lifesigns’ John Young and Oliver’s younger brother Adam Wakeman are among those to have enjoyed stints with the band.

In a somewhat spooky instance of history repeating itself, Oliver quit after 2009’s Dancing To The Devil’s Beat to join Yes. “Like father, like son,” Cousins ruefully laughs.

In recent years, the Acoustic Strawbs, featuring long-time fellow members Chas Cronk on 12-string and bass, and Dave Lambert on electric guitar, have often been the primary outlet for the band’s extensive repertoire, abetted by occasional tours and appearances with a full group. However, as new material began to accrue, Cousins decided it was time to put together another full-scale electric line-up.

“It was Carl Palmer’s guitarist Paul Bielatowicz who suggested to me that I get in touch with Dave. I’m glad we did because I happen to think Dave Bainbridge is one of the most talented musicians I’ve ever worked with. He’s extraordinary.”

Evidence of the rapport they share can be found in When The Spirit Moves, one of the key songs from The Ferryman’s Curse, suggests Cousins. With a sentiment inspired by the chance sighting of the Pope when the singer was on holiday, Cousins stresses that the song is about the spiritual impulse rather than any homage to organised religion. In explaining to Bainbridge what kind of arrangements he felt the song required, the singer told the keyboard player, “I could hear Vaughan Williams’ The Lark Ascending, by which I meant I could hear a whole rolling orchestral piece where everything evolves, develops and builds. Of course, it isn’t The Lark Ascending but rather an evocation of that kind of sound world. The guy is remarkable in that he understands what I’m trying to say. It was just extraordinary working with him.”

Even when the material is written, the making of any album can be a difficult business. In August 2017, as Cousins stepped up to the microphone in producer Chris Tsangarides’ Ecology Rooms studio, he was wracked with pain.

Cousins reveals that work on the album would have started a couple of years earlier had it not been for a bout of ill-health that dogged him and required hospitalisation on several occasions. In June 2015 he had a fall at home, and although he was able to resume touring and writing in 2016, he was laid low on several occasions during 2017. “I’ve had more operations in the last year than some people have in a lifetime,” he quips gamely.

As a result, Cousins has had to relinquish the business end of the operation. Witchwood Media, the label he founded in the early 2000s to handle the albums emerging from both the acoustic and electric versions of the group was a cottage industry, but one successfully delivering music to a fan base on both sides of the Atlantic.

“The reason why we changed labels from Witchwood was my health. I cannot run the record company, run the band, and do it all myself. I had an approach from Esoteric a couple of years ago and so was happy to hand over to them to put out The Ferryman’s Curse.”

There’s a chemistry between Cronk, Lambert and himself, says Cousins, that stems from the fact that they’ve worked together for over 43 years. “Chas and I write songs together very easily, with me tending to do the lyrics. Dave Lambert is a rock guitarist, very much in The Who tradition. His idol is Pete Townshend. The combination of that, with my tunings and Chas playing his 12-string, bass and foot pedals, gives us a sound that works with both the acoustic and electric band.

“Dave is an out-and-out rocker but he loves the gentle folky parts. You can hear it in his playing. On The Song Of Infinite Sadness from the new album, the solo in the middle is him using an EBow on an acoustic guitar. It gives you an eternal sustain, and has that peculiar singing noise.”

While the album is forward-looking, it also deliberately evokes the band’s past in places.

“The actual title track of the album, The Ferryman’s Curse, is the sequel to The Vision Of The Lady Of The Lake, which was on the second album we ever made, Dragonfly,” Cousins says. “That song was based on getting up early one morning to drive up to Scotland to do a gig. At seven o’clock on an autumnal morning, there was a mist over a reservoir near Barnet. With the myths of King Arthur in mind, I wrote that epic with its 14 verses there and then.

“Forty-seven years later I’ve written a song about what happened to the boatman in that song. There’s a twist at the end that would, in theory, allow me to do a sequel to that one as well. I just need another 47 years to write it!” he laughs.