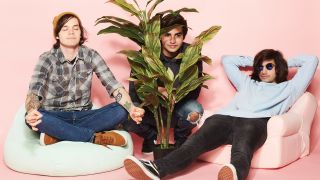 “Sometimes I’ll see a 40- or 50-year-old guy in a Rush T-shirt at our show,” says Chon’s laconic guitarist Mario Camarena, who’s all of 25. “It’s cool that older prog dudes like us – it gives us some real credit. Often they’ll say that after seeing us, they’re not worried about the future of prog, and that’s good to hear.”

The math rock trio are hearing many good things this year, from old prog dudes and young crowdsurfer types alike. Homey, the follow‑up to their 2015 debut album Grow, came out in June and peaked at No.66 on the US Billboard chart – respectable, given the genre’s niche appeal.

Their American tour dates regularly sell out, and you only have to check out online footage to see the connection they’re making with people. They packed out New York’s Webster Hall, a 1,500-capacity room, and their homecoming gig at San Diego’s House Of Blues saw 1,100 heaving bodies going apeshit to the band’s complex yet oddly sunny tunes. Of the new stuff, Camarena says the rhythmically tricky No Signal has been going down surprisingly well, along with old favourites like Grow’s Perfect Pillow.

“We’d play that same song nine years ago, when we were starting out, to empty rooms,” says Camarena. “We’ve played to nobody a lot. We’d do any show we could in San Diego for our first two years, usually just to the other bands and our friends. We knew we were making cool music, but instrumental music wasn’t thriving as much as now. The first question people would ask was, ‘When are you getting a vocalist? You’ll never do anything without one.’ That’s an outdated question now. People know instrumental music is its own thing.”

Back then Chon’s drummer, Camarena’s youngest brother Nathan, was just 11 (type ‘Chon live 2008’ into YouTube for footage of him hammering away in 7⁄8 as a pre-teen). Mario’s guitar counterpart is lifelong buddy Erick Hansel. The two grew up learning the instrument together, building up a complex style drawing on the technical intricacies of metal guitar. They’d devour everything from Shrapnel-era shredders like Paul Gilbert to fusioneers Return To Forever.

“Erick and I have had so many moments that come from jamming with someone who you connect with on a musical level,” says Camarena. “Our guitar parts are so interwoven, they totally mesh together. There’s no lead and no second guitar, it sounds like one big part. Over time we’ve tried to be more creative and come up with newer ways of playing with two guitars.”

And they succeed. Big fans of jazz pianists Hiromi, Robert Glasper and Tigran Hamasyan, the two will often split a song’s melody between them, as if one guitar were the pianist’s left hand, the other the right (see Homey’s fun, fiddly opener Sleepy Tea). In a pleasingly old school touch, Mario is always panned left in the stereo mix, Erick to the right.

Run Spotify’s Artist Radio algorithm on Chon and it spits out some interesting names – fellow hot newbies Polyphia, Aussie guitar whizz Plini, Scale The Summit, and some of the bands they’ve supported – tech metal stars Periphery and Animals As Leaders.

“Animals have always been a favourite,” says Camarena. “We did our first national tour with them, and we were complete newbs. Every single night we’d watch their whole set, must’ve been 30 times in a row. We learned so much from them – it was insanely inspiring. They showed us the ropes of being a touring musician. Like, we had no clue about green rooms, didn’t even know they existed. Usually each band has their own room and the headliner gets the biggest one, but with Animals we all hung out everywhere and it was like a big family vibe. We thought that was normal until we toured with some other bands! We’ve been doing that on our own headline tours since.”

That family vibe is part of Chon’s sweet chemistry (their name itself is an acronym for carbon, hydrogen, oxygen, nitrogen, nicked from a TV science show a decade ago). The family ties and Hansel’s position as honorary brother contribute to a certain quality that draws many towards them, and also drives some away. That album name is not
for nothing.

There’s a cosy, West Coast warmth to Chon’s jazz-flavoured music, a major key brightness amid the mind-boggling widdle; an open, positive tone absent from many of their more techy, testosterone-fuelled peers. They’re too gentle for the djent-ers, not arch enough for the ArcTanGent hardcore (that’s a festival Chon love and have done twice). Maybe it’s no coincidence that their crowd features a disproportionate number of female fans for the genre.

“That tone just comes naturally, I suppose,” Camarena mumbles. “We write complex stuff, but we love putting humour in there too. On [Homey track] Waterslide there’s a little bit of chromatic nonsense that Erick does before the shredding kicks in that makes me crack up. You can’t take this style of music too seriously, otherwise it gets a little dry.”

You can almost imagine that old Rush fan tutting, downing the dregs of his pint and heading for the door. These explorations have bemused at least some of their fan base, for now.

“Maybe this stuff takes time for fans to really get into,” Camarena says. “We had a vocal track on the last album [Can’t Wait] and our online audience was split about that. Now when we play it live the whole crowd sings along. We’re listening to that electronic kind of music more these days, bands like Tennyson, who sound like the future of music. We wanted to go into that realm a bit, but we’re not good enough to do it ourselves yet, so we got our friends in. Guitars will always be our main thing though. It’s what we love. There are still a lot of possibilities.”

After headline dates in the UK in October, Chon tour the US again the following month with Circa Survive and Thrice. It’s going well for the little math rock band that could.

“It’s insane,” says Camarena. “This doesn’t even feel real sometimes. I’ll be at home playing [video game] Super Smash Bros, and the next day we’re playing a huge room. We’re still trying to make sense of it. And the thing is, we haven’t had a bad crowd yet. As long as we perform well and give a lot of energy, it usually goes down well.”

Homey is out now via Sumerian. See www.facebook.com/musicofchon for more information.