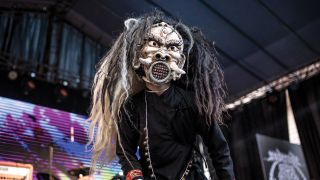 Nepal isn't known for its metal scene, but Underside have emerged nonetheless and they aren't just playing awesomely heavy music – they are also protesting the beliefs of the country and religious doctrine they grew up with.

Their latest track and subsequent video is specifically targeting religious festival, Gadhimai, where thousands of animals are killed in the name of a god.

"We play metal and it’s not native to where we come from. That’s why we decided to use our native instruments as well as tell story from Nepal. You could say this is us redefining our sound. Gadhimai is the beginning of new era for Underside," the band explain.

"Gadhimai is a festival where hundreds of thousands of animals are sacrificed in the name of god. If you put that in perspective, it’s hard to imagine that it’s still happening you know.

"We see it as ignorance and a perfect example of how religious doctrines blinds you and that killing innocent animals are justified.

"We don’t want to offend anybody’s religious faith and have no intention to make comments on that but if it involves killing of innocent animals for whatever 'holy' reason that you might consider, you are sick and fucked in your head.

"We want to send our message that we don’t support killing of animals and this video is rather symbolic where Gadhimai (goddess) finally wakes up and kills all her ignorant followers. The whole concept started from challenging the existing practice and us imagining would 'God' really want blood of these innocent animals if all the creatures were created by god as they say?"

Underside will be playing Download festival this summer. Check out the full video below!