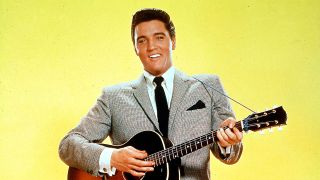 It’s almost poetic that Hank Williams died in the back of a limousine on January 1, 1953. The country icon was a drug addict, hard drinker, hellraiser and all-round nuisance, but even he might have struggled when he saw the music he loved, pioneered and massively popularised have its throat cut by the emerging sound of delinquent America.

“Before Elvis there was nothing,” said John Lennon, although the man who would be King didn’t actually invent rock’n’roll – Bill Haley & His Comets had already figured out what made the teenagers tick, with their international smash Rock Around The Clock.

The chubby, middle-aged Haley was no teen dream, however. What Elvis brought to the table was sex. The excitement the ridiculously good-looking kid from the Memphis projects generated at his concerts in the 1950s was frighteningly intense, with girls hurling themselves at the stage and leaving behind urine-soaked seats. Overnight this sweet southern kid became public enemy number one. And all because he liked to swivel his hips.

Presley cut his first records at Sam Phillips’s Memphis Recording Service [aka Sun Studio] in Memphis in 1954. Ultimately the kid was too big for Memphis, and in 1955 Phillips sold his contract to the RCA Victor label in Nashville for $35,000. After cutting hits such as Heartbreak Hotel and Hound Dog at RCA, there wasn’t a soul on the planet – including John, Paul, George and Ringo – who didn’t know what an ‘Elvis Presley’ was.

After he finished his stint in the US army in 1960, Presley’s career never quite recovered until he blasted back into killer form in 1968 with his Comeback Special. After that came the Vegas jumpsuit years and a slow decline in physical health, albeit while recording some fantastic music.

In the end, Nashville and country music recovered from rock’n’roll’s dominance by tailoring its output to an adult audience, dropping the banjos in favour of pianos, strings and plenty of schmaltz. Elvis ultimately followed in Hank Williams’s footsteps, leaving behind a drug-ravaged corpse when he checked out in 1977. While the ‘Fat Elvis’ image has stuck, The King Of Rock’n’Roll defied his poor background and death threats from the KKK – and some truly terrible movies – to change the world for absolutely everyone, with no exceptions.

This country-soul masterpiece was cut at American Sound Studios in Elvis’s home town, backed by the Memphis Boys, a crack session outfit that included bass genius Tommy Cogbill and guitarist Reggie Young. Initially wary of the superstar in their midst, the boys were ultimately won over by Presley’s charisma and commitment to hard work. The fact is, Elvis needed these sessions to pay off, and he put everything he had into tracks like Wearin’ That Loved On Look, Long Black Limousine, In The Ghetto and two non-album 45s – Suspicious Minds and Kentucky Rain – both included on this album’s 2009 CD reissue.

A TV special that aired on NBC in December 1968, Elvis has since become better known as The ’68 Comeback Special due to the revitalising effect it had on The King’s then flatlining career. Watching him belting out Tiger Man in a skin-tight black leather suit is just one of the highlights. Elvis claims he’s up on the latest sounds, then shows the hippies how it’s done with a jaw‑dropping rendition of If I Can Dream. The segments where he fools around and jams with old friends Scotty Moore and Bill Black are priceless.

True or not, the legend that Sun Studio owner Sam Phillips was looking for a white kid who could sing black bore strange fruit when southern racists denounced Elvis as a degenerate and a “nigger lover” to boot. Even Frank Sinatra weighed in, writing the kid off as a “vulgar nincompoop”. While the KKK wanted him dead and made no bones about it, the kids lapped up dynamite rockabilly like That’s All Right, Blue Moon Of Kentucky and Mystery Train, all driven by Presley’s acoustic rhythm guitar, recently departed Scotty Moore’s country jazz picking and Bill Black’s thumping upright bass. This is the true birth of rock’n’roll.

The King’s debut LP for RCA Victor in Nashville became almost as influential for the way it looks as how it sounds when The Clash ripped off its cover art for their 1979 album London Calling. Presley’s record is actually a mix of tracks recorded at RCA and leftovers from his time at Sun. His now iconic versions of Carl Perkins’s Blue Suede Shoes, Little Richard’s heavily coded celebration of gay sex Tutti Frutti and Ray Charles’s I Got A Woman blend almost seamlessly with earlier Sun cuts like Just Because and Blue Moon. The public certainly didn’t see the joins, and bought the record into the No.1 spot in the US and UK.

There are hundreds of Elvis compilations out there, and you should grab one of the career-spanning sets for your listening pleasure. That said, one of the best collections is his first. In fact, Elvis’ Golden Records is the first rock’n’roll compilation ever, and it’s flawless. All the songs that made John and Paul, Mick ’n’ Keef and Pagey and Plant want to be rock stars are included: Hound Dog, Heartbreak Hotel, Jailhouse Rock, All Shook Up. You’ll also encounter the so-sweet-it-could-rot-your-teeth ballad Love Me, as mimicked by Elvis nut – and his one-time son-in-law – Nicholas Cage in the film Wild At Heart.

He might have signalled the start of country music’s 50s decline the moment he stepped over the threshold at Sun Studio, but this lesser-known concept album from The King pays tribute to the artists and art forms that excited him as a kid. While he cooks on a pounding version of Jerry Lee Lewis’s Whole Lotta Shakin’ Goin’ On, it’s a sweet reading of Willie Nelson’s Funny How Time Slips Away that keeps the repeat button in business.

The album wasn’t a huge commercial success, but it was more about Elvis remembering where he came from.

Good - Elvis albums that are worth exploring

Aloha From Hawaii Via Satellite (1973)

Contrary to uninformed opinion, Elvis released some of his best music in the 70s – no one could pull off tongue-in-cheek chest-beating rockers like Elvis does on Burning Love and A Big Hunk O’ Love. Elsewhere he dips into his back catalogue with Suspicious Minds, Hound Dog and Blue Suede Shoes, and gives props to The Beatles with Something. The standout, though, is An American Trilogy, an overwrought tribute to the deep south. If Elvis’s whispered ‘You know your daddy’s bound to die’ line doesn’t put a lump in your throat, the huge orchestral crescendo at the end will.

The follow-up to his RCA Victor debut features one of his weirdest covers. Only Elvis could wring so much pathos out of Red Foley’s Old Shep, the heart-rending tale of a mutt. The song was based in fact: Foley’s dying dog Hoover was poisoned by some loathsome ne’er do well.

Turns out, Elvis and Old Shep had form. It was the first song he performed live, at a talent show when he was ten.

If you’re thinking: “I’m not buying the album for some pooch memorial,” then you’ll be relieved to know that Elvis also includes some of his best early rockers including Rip It Up, Paralyzed and a storming cover of Little Richard’s Long Tall Sally.

To an America divided in shock and titillation by Elvis’s hip-swivelling antics on TV, and subsequent censorship, this festive platter came as a complete surprise. What the outraged parents didn’t know was that Presley was a devout Christian, and an unashamed mummy’s boy, a fact revealed by his sincere rendition of the gospel song (There’ll Be) Peace in the Valley (For Me). There’s a nice version of White Christmas too, but it’s Elvis’ cracking take on the cry-in-yer-eggnog perennial Blue Christmas that everyone knows. If you’re excited about Santa visiting you this year, this is the only Christmas album you need.

Even a diehard Presley fan would concede that most of his films are shit. His acting career started off promisingly enough with the likes of Loving You (1957), King Creole (1958) and G.I. Blues (1960), but as the 60s progressed he was reduced to answering the difficult questions with piffle like (There’s) No Room To Rhumba In A Sports Car in trash celluloid like Fun In Acapulco.

Not that this particular film’s soundtrack is the worst he released. We’ve picked on this one because it represents Elvis in his ‘fiddling while Rome burns’ period, phoning it in while The Beatles and the rest of the British Invasion forces gathered on the horizon with their sights set on America.

Buyer's guide: how to buy the best of BB King

Danzig: I wouldn't be me without Elvis and Sabbath