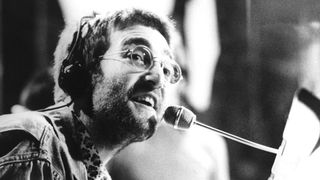 John Lennon’s post-Beatles work offered something for everyone, from the existential torment of 1970’s debut album through to the political rancour of Some Time In New York City, the utopian visions that flooded Imagine and the exiled romanticism that informed Mind Games. And, of course, the blissful reverie of 1980 comeback Double Fantasy, recorded after five years’ silence and, tragically, released just weeks before his murder. As such, it’s a solo catalogue of diverse and wonderful gems…

The follow-up to Give Peace A Chance was a bruising account of John and Yoko’s heroin withdrawal (in 1970, he attributed their addiction to “what The Beatles and their pals were doing to us”). The raw ferocity of Lennon’s vocals are matched by Eric Clapton’s rasping guitar licks and Ringo Starr’s unyielding rhythm.

Lennon at his most acidic, spitting bile at right-wing politicos, the manipulative arm of the mass media and “uptight, short-sighted, narrow-minded hypocritics” everywhere. Originally conceived during The Beatles’ trip to India in 1968, the tirade was reconditioned to include Richard Nixon (“tricky dicky”), marked by Nick Hopkins’ steady piano line and a scorching solo from George Harrison.

Domesticity clearly suited Lennon, who gave up the day job in 1975 to concentrate on bringing up son Sean and spending more time with the missus. He didn’t return to music until 1980, with this breezily contented ode to househusbandry, centred around a delicious piano motif: “No longer riding on the merry-go-round/ I just had to let it go”.

Lennon’s debut album proper was released in the wake of primal therapy that he and Yoko had undertaken with Arthur Janov. The result was a deeply personal, sometimes harrowing, batch of songs that addressed the former Beatle’s inner turmoil, not least this bare, devastating ballad that suggests his greatest fear was abandonment.

Lennon drew from experience on this sparse acoustic ballad, lambasting the ruling elite for its insistence on societal conformity rather than individual freedom. “They hurt you at home and they hit you at school / They hate you if you’re clever and they despise a fool.” The presence of two ‘fuck’s, meanwhile, landed him in bother with the censors.

Initially worked up during the Let It Be sessions as Make Love Not War, Lennon later rejected its working title for being too hippyish. The final version, named after Robert Masters and Jean Houston’s book, Mind Games: The Guide To Inner Space, features one of his most sublime melodies and a killer chorus.

The standout track from an otherwise patchy album of left-wing politics and sloganeering, New York City updates The Beatles’ Ballad Of John And Yoko by describing their life together in the Big Apple, with references to the Apollo Theatre, the Staten Island Ferry and the Elephant’s Memory band. A belligerent swipe of old-school rock‘n’roll.

Inspired by an instructional poem in Yoko’s Grapefruit book, Lennon’s most enduring song has suffered from over-exposure down the years, adopted by oldies stations and ad agencies the world over as shorthand for a peaceable future. The song’s subversive tone - “anti-religious, anti-nationalistic, anti-capitalistic”, as Lennon put it – is coated with enough melodic sweetness to make it infinitely digestible.

Dismissed by Lennon as something he just “churned out” after waking up with the melody lodged in his head, #9 Dream is a psych-pop masterpiece nevertheless. He reused his billowy string arrangement from Harry Nilsson’s Many Rivers To Cross, while the whispered voice that presages the nonsense chorus - “ah böwakawa poussé, poussé” – is that of Lennon’s then-mistress, May Pang.

Lennon was still officially a member of The Beatles when he released his third single with the Plastic Ono Band, produced by Phil Spector. Over strident piano (courtesy of Lennon, George Harrison and Klaus Voormann, with Billy Preston adding weight on organ), Instant Karma! is an ambiguous plea for unity that pours scorn on doubters and the uncommitted. Unstoppable hug-a-long chorus, too.