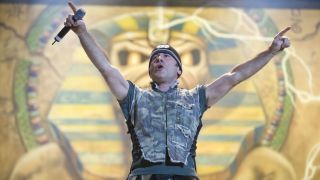 In our weekly feature Thinking Out Loud, we find out what’s going on in the minds of the great and good. This week, we peek inside the brain of Iron Maiden frontman/fencer/pilot/author and brewer Bruce Dickinson…

“I cut my teeth as a kid on Purple. It’s what I grew up with, what got me out of bed in the morning in terms of rock’n’roll music. Ian Gillan was a big vocal hero of mine. I did my first album with the band Samson [1979’s Survivors] at what was then Ian’s studio, Kingsway Recorders in Holborn. We partied exceptionally hard before going down for a playback, and Ian turned up in the middle of it and was listening away. I had to excuse myself to go and throw up in the loo, and sat there with my head down the loo for about 45 minutes, at which point Ian took pity on me. He went, ‘Where’s he?… Ah there he is… drag him out, clean him up, put him in a cab, send him home.’ I’ve never forgotten that.”

“We were on tour in Winterthur, Switzerland when we got the news about The Number Of The Beast album. We got a telegram on the Sunday morning going: “Your album is number one!”. And we went: “Fantastic!”. But at the time, we were pushing a 30-seat coach to jump start it, because the driver had let the battery go flat.”

“We were young and we were all chucked into this huge shit-storm of success and we dealt with it in different ways. To a certain extent you make a Faustian deal when you join a successful band. There is a price that gets exacted upon you, and there’s very little you can do about that except hope to come out the other end of it right-side up.”

“We were all fit as trouts at the end of the World Slavery Tour, running around, skinny as rakes. I think we’d all gone a bit barking mad. I was going stir crazy. Thirteen months on the road was not conducive to the state of my mental health!”

“How have we maintained our relationships in Iron Maiden? We take the piss all the time. We’ve been down a long, long road together. Steve [Harris] and I have such different personalities, but we have many moments when we’re so close, it’s really special. It’s Team Iron Maiden. It’s a bit like a football team but it’s so much more than that. It’s more than a job, because I wouldn’t put my body through what it goes through for a job.”

“I don’t take back any of my fashion statements however awful. I never regret anything because it’s all part of life’s rich tapestry. And in any case you can always hold it up to scare your children later.”

“It’s a very bizarre story, how I ended up writing Empire Of The Clouds. Basically, I won a piano in a raffle. It was one of these charity dinners, hosted by Jamie Oliver. There were various auctions where you could win things that were utterly useless to me, like free facial pampering session at some place in the Cotswolds. But there was also a little portable electric piano up for grabs – signed, it must be said, by Jamie Cullum! I thought, I wouldn’t mind having a piano at home to muck about on. And in the end I won it – I am to the piano what two fingers are to typing.”

“I’d wondered how they tell you [about cancer]. Is it over tea and biscuits? But the oncologist just said, “Well, I have a letter here that says you have head and neck cancer.” So that’s how they do it: straight between the eyes. I appreciate that. I was told I had a golf ball-sized tumour on my tongue, and another in my lymph node. But the oncologist also said: “You’re an excellent candidate for a complete cure.” He told me, “I’ll get rid of this for you and it won’t come back.” I didn’t see the point in being fearful. I asked the doc: “Assuming I get rid of this, how long before I’m back to normal?” He said about a year. I said, “I’ll beat that.”