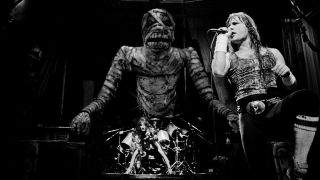 “We’re playing at Long Beach tonight, if you wanna come along.” That was the simple invitation offered by Iron Maiden manager Rod Smallwood. I was in LA at the time on an assignment, but this trip had nothing to do with Maiden. However, the opportunity to see them playing at such a prestigious venue was too tempting to turn down. It was March 16, 1985, the third of four nights the band were doing at the arena. And it was to be an experience…

I had seen Maiden playing at every type of venue in Britain – clubs, theatres, supporting, headlining – but nothing could prepare for the crush at Long Beach Arena. The queue of vehicles as we approached was incredible, cars and trucks had their windows rolled down, and were blasting out metal sounds from cassette players (!) or radios tuned to local stations who were busy ramping up the fever, by playing Maiden tracks back to back to back.

Getting into the venue took a while, as the guest-list queue was almost never-ending. Inside, Maiden merch was everywhere, the excitement levels set to eleven. It was going to be tough for any opening act tonight given that the sell out crowd were so clearly hyped up for the main attraction, but Twisted Sister stirred the pot nicely, setting the tone for what was to follow.

I’d seen the band playing at Hammersmith Odeon the previous October, and that was impressive. But as the lights dimmed, the crowd erupted, and you knew this was going to be an altogether different level of hysteria. The rumble of engines and the unmistakable sound of the famed Winston Churchill speech heralded the arrival of the band, bursting onstage and racing straight into Aces High.

The sheer size of the stage size quickly sank in. Compared to what we’d been used to in the UK, this was overwhelming, almost daunting. Reflecting the concept of the Powerslave album with its Egyptian motifs, it looked like Maiden had set up camp across a couple of football fields.

There was a constant hum – no, make that bellow – from the fans. It never let up, even as the band blazed through a set buoyed on a relentless, unstoppable energy.

It’s hard to cherry-pick highlights in a set full of them, but Dickinson’s “Nice to see you, to see you nice!” imprinted a little bit of old England (and Bruce Forsyth) on a confused looking American crowd.

And who can forget the iconic “Scream for me, Long Beach!”, bellowed into the Aether during the anthemic Iron Maiden. That song also saw a bandaged Eddie lumbering into view, looming up behind Nicko McBrain’s drum kit. His eyes flaring with pyro as the song reached its climax, Steve Harris leaping into the air from the drum riser right on cue.

The big difference between seeing Maiden in their home habitat and out in the States, though, was the completely OTT crowd. Maybe we’d seen them too often in the UK, and took the band for granted, but out here in the colonies, they were appreciated for what they were then; metal’s living, breathing zeitgeist.

This was Maiden elevated to the stature of the biggest bands in America. While they existed in a bubble in Europe, here they were as big as Van Halen, Kiss, Foreigner… any of the arena bands. And watching this performance gave me a revitalised respect for just how astonishing and ubiquitous they’d become. Little wonder then that the band’s Live After Death (their first live album), recorded here and at the Hammersmith Odeon, still stands as not just a great live Maiden album, but one of the great live records.