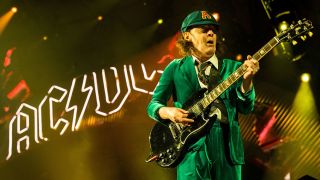 Let’s face it: you are AC/DC now, and with great powerage comes great responsibility.

I mean, we get it: because of all the money AC/DC make, it might be easy to mistake them for just another corporation – a big brand with shareholders and a CEO who’s able to fire the MD if he’s not performing, and replace him with someone else and just carry on, business as usual.

But AC/DC is not Carphone Warehouse.

You are not a service provider and we are not just customers. Collectively, your millions of fans have invested more than money in this band – in loving the music, buying the records, going to the gigs – they’ve invested decades. We’ve put our heart and soul into this. You have what other brands would kill for: fully engaged and loyal customers.

So try and understand: losing Brian is a blow to us. You’ve probably known about it for a while. You saw it it coming, had time to get over it. But for the thousands of people who’ve bought tickets to what’s felt like the band’s last tour (what with Malcolm gone, Phil under house arrest, the relentless march of time), this is a shock.

That the only message from the DC camp has been, effectively, that “the show must go on” and “We thank Brian for his services, but meet the New Guy – cough! – Axl” seems insensitive. It fails to recognise the hearts that have been broken. It misses the point. We don’t just want ANY old “AC/DC” up there. We want our boys.

We depend on Brian Johnson up there. I mean, we LOVE you too. No getting away from that. You’re the main man! And we had our hesitations about Beano at first. Bon’s shoes were hard to fill, but you choose well. He had the voice and he had that down-to-earth, one-of-the-boys, here-for-the-craic vibe. You knew he was the kind of guy who’d get his round in. He earned his spot. It was like when your favourite striker gets dropped and replaced by some fancy-dan wanker from another team… but then starts knocking in the goals. Jonno’s been knocking them in for decades now – for most of our lives.

So it hurts, and you probably hate all this shit because you’re Scottish (so am I! I’m writing this in the back of a taxi ten minutes drive from where you and Malcolm were born!) but we need closure.

If that sounds wanky, put it another way. In football they have testimonials. In fact, even if you worked in a fucking factory, down the power station, whatever, they’d still have a leaving do for you. Everyone would chip-in to buy you a present, slip cheeky vodkas in yer Guinness and make sure you you left in style.

Here’s how you can rescue this:

I’m not saying turn it into a tribute act. I’m saying make them THE ULTIMATE AC/DC GIGS EVER!

Keep people guessing, get them excited, give us a wake for AC/DC – for Brian, for Malc, for Bon – give us the best party we can possibly imagine, go out in style, go out like legends, and please, please, if we must have him, just give us a break from Axl every now and again. He does my head in.

PS: Don’t worry about a leaving card for Brian - we’ll sort it.