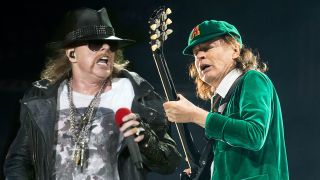 So we’ve all read that news story about Axl Rose spotted leaving an Atlanta studio on the same day as AC/DC, right?

It’s certainly added weight to the rumours that the GN’R frontman could replace Brian Johnson for the remainder of the band’s Rock Or Bust world tour. After all, why would Axl be in Atlanta? He might have have made the 2,100 mile journey just to pop his head around the door and get his copy of High Voltage signed. He’s a millionaire rock star. You’ve seen how many hats he owns. He can do things like this on a mere whim.

Even though AC/DC are remaining tight-lipped on who’ll fill Johnson’s shoes when the tour resumes next month, we’ll find out soon enough. Until then, here’s Sleazegrinder who contemplates a world where a Rose-fronted ‘DC may become a reality…

First of all, let’s remember the victim in all this (besides you, dear reader, if you buy into this half-assed goonshow), poor ol’ Brian Johnson. First sign of trouble and his bandmate of 36-ish years dumps him, unceremoniously, at the side of the road and leaves him for dead. Watch any Johnson-era AC/DC interview ever and you’ll get the dynamic instantly – these dudes were co-workers, nothing more, despite all the money and the fame and the (ahem) ear-battering rock n’ roll. Still, yikes. Pretty harsh. Although I will say this: once I was interviewing The Answer in New Jersey while they were touring with AC/DC and Johnson burst in, ignored me completely, and blathered on about Florida and Disneyland After Dark (what with the Geordie accent I still have no idea if he meant the band or the amusement park) for 20 minutes. Like I wasn’t in the middle of something, man. So, you know, maybe Angus has a point with this guy. But that’s neither here nor there. Sure, AC/DC loses their singer, that’s a rock n’ roll crisis for sure. But there has never been a time in his life when Axl Rose was the answer to a crisis, rock n’ roll or otherwise.

Here’s the thing with AC/DC. They play working class rock n’roll for working class rock n’ rollers. They always have. Even with their piles of money, they clock in, do their job, punch out, go home. Same as it ever was, for 43 years running. Make a record that sounds just like the last record, tour it around the world for two years, rinse and repeat. Trends come and go, but AC/DC stays the same. No nonsense dudes playing no nonsense rock n’roll. Axl Rose, on the other hand, is all nonsense, all the time. I guarantee you that Angus Young cannot even contemplate being four hours late for a gig. It is unfathomable to a bunch of hard-bitten, hard-working Aussies that someone would do it to his own fans. But that’s part of his ‘magic,’ man. So how does AC/DC handle that shit? And that’s not even the worst of what could happen on that stage. Imagine waiting a bladder-bursting four hours for the gig to start and then halfway through, say, Shake A Leg, Axl yelps “Gimme some reggae!” like he always insists on doing for no good reason whatsoever. What happens then? Does Angus Young then give Axl Rose some reggae? Because if he does then I will give up rock n’ roll forever.

There’s really no need for any of this. If they forge ahead with this madness then AC/DC will be as legit as the Chinese Democracy version of GN’R. I’m sorry, but that band is more than Angus. That band is a band, man. That band is Malcolm and Angus and Phil and Cliff and Brian (or Bon preferably, let’s face it). And that band deserves to die with dignity, not get dragged around the world as an Axl Rose vanity project. I get it, the dude wants to keep playing, but hells bells, man, go form a blues band like every other 60-year-old guitar-slinger. You did your duty, sir. And you did it better than almost anybody. So just hang up the boy-shorts and enjoy a little time in the sun. Because otherwise what this implies is pretty ugly. Axl getting the gig fairly demands that you’re gonna have to shell out a week’s pay just to see AC/DC. I mean, if they hired Angry Anderson, tickets would be $25 a pop. Given Axl’s reputation, it’s not like they wanted him in the band to ensure smooth sailing. Christ, even getting the set list together is gonna require lawyers. This is pure vulture capitalism, which is pretty much the opposite of what AC/DC was supposed to be about in the first place. If we keep narrowing the rock n’ roll experience down to half a dozen trillionaires mixing and matching their way through their 70’s and 80’s catalogue, than we are through as a culture. If that’s the case then we are no longer involved in a living art, one that grows and evolves and transforms with each new group of starry-eyed dreamers who pick up guitars and learn the riffs on Highway To Hell. We’re just hardcore nostalgia fans getting high on the dust of the ages. And that’s some serious bullshit, man.

Here’s a compromise for Axl, though. He can come out and play the bagpipes during It’s A Long Way To The Top (If You Wanna Rock ‘N’ Roll). I know he’s got a bitchin’ kilt collection.