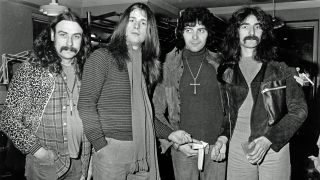 Early in their career, Black Sabbath released albums and launched tours at a breakneck pace. For a while the relentless record-tour-record cycle helped fuel their creativity – from 1970 though 1972, Sabbath issued four classic albums.

These spawned numerous anthems: Paranoid, Iron Man, N.I.B., Sweet Leaf, etc. But when in the summer of 1973 the group tried to settle down and write their fifth album, guitarist/ songwriter Tony Iommi experienced something he’d never had previously – a wicked case of writer’s block.

“What happened was we’d done Volume 4 in Los Angeles, and we had a house in the city,” Iommi recalls. “We all lived there. And everything was great on that album.

“We came to England and toured and all the rest of the stuff, and then we were due to make another album. We went back to the [LA] house again, to do Sabbath Bloody Sabbath, and I got writer’s block. It just went dead. We had the studio booked, same everything booked. And it was just one of those times. I really panicked: ‘Oh my God, I can’t seem to think of anything that we like!’. I could play stuff, but it just wasn’t sinking in; I didn’t like it. So we cancelled the whole thing, came back to England.”

Instead of jumping right back into the songwriting, the band took a little time off to recharge their batteries before getting back to work. But rather than rent an ordinary house to write and record, they had something else in mind.

Iommi: “We rented an old castle in the Forest of Dean [Clearwell Castle]. And it was just us there. What we did was we set up the equipment in the dungeons of the castle, to try and get some vibe going. And then that was it – we came up with Sabbath Bloody Sabbath, and the rest came fairly shortly afterwards. The block had gone.”

In the Brian Ives-penned essay A Hard Road 1973-1978, from Sabbath’s 2004 Black Box multi-disc set, bassist Geezer Butler recalls how he and the band felt when Iommi presented the Sabbath Bloody Sabbath riff to them: “When Tony came up with the riff to Sabbath Bloody Sabbath, it was almost like seeing your first child being born. It was the end of our musical drought, the beginning of our new direction, an affirmation of life. It meant the band had a present – and a future – again.”

As with the majority of Sabbath’s early material, Butler was the song’s lyricist. In the same Black Box essay, he explains: “The lyrics to Sabbath Bloody Sabbath were about the Sabbath experience, the ups and downs, the good times and the bad times, the rip- offs, the business side of it all. ‘Bog blast all of you’ was directed at the critics, the record business in general, the lawyers, the accountants, management, and everyone who was trying to cash in on us. It was a backs-to-the-wall rant at everyone.”

Musically, the song is comparable to past Sabbath classics, with its mammoth Iommi riff, and includes a musical trademark long associated with the band – merging a heavy section (‘You’ve seen life through distorted lies/You know you had to learn’, etc) with a lighter one (‘Nobody will ever let you know/When you ask the reasons why…’) – to create light-and-shade contrast. And harking back to such past compositions as Black Sabbath and Children Of The Grave, the song concludes with a long, instrumental jam section.

Although the band would begin to fracture soon afterwards (due to drug abuse and burn-out), Iommi recalls that they were getting along quite well on both a musical and personal level around the time of the recording of the song.

“We’d done what we always do: we go to a studio, lock ourselves in, and record the album. Everything seemed to go all right on that album, I think. We didn’t have all the problems we had with some of the others.”

But there were a few odd ‘occurrences’ outside the band’s circle that happened during the recording.

Iommi: “I recall walking from the dungeons one day, I think with Geezer, Bill, or somebody. We were walking along the hallway, and saw this figure coming towards us. It’s a long corridor. This figure turned left into this room, which was the armoury room, where they had all the weapons. We followed, and went in. There was nobody in there. And there was no way out or anything – no other door. Very odd. Anyway, a few days later, the people who own the castle came to see if we were okay, and we said: ‘We’ve seen a few strange things happening here’, and we told them. They said: ‘Oh God, that’s…’ whatever his name was, ‘the castle ghost. Don’t worry about him!’.”

Released as the album’s lead-off single, Sabbath Bloody Sabbath was the first Sabbath song to have a promo shot to accompany it. In it, the group don’t mime the lyrics or fake playing their instruments – in fact they don’t even bother to pick up their instruments at all – as they waltz through what appears to be a forest.

“That was at Geezer’s house. That was Geezer’s garden we were walking around in,” Iommi recalls of the ‘forest’ scene. “What I remember about that is that we just turned up and that was it, really – we’re doing a video!”

This was first published in Classic Rock issue 78.