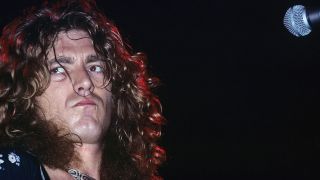 Robert Plant has got a new album out. It’s a brilliant album – like most of the material he’s released since I started paying attention again in 2005, in fact – but it’s hard to concentrate on that because the return of Robert Plant is always heralded by the same old noise:

Plant in The Telegraph saying that Led Zeppelin won’t reunite, that he can’t “go back”.

Plant in The Guardian saying that his vocals on early Zep tracks like Babe, I’m Gonna Leave You are “horrific”

Plant saying that rock ran out of steam. Plant suggesting that to ‘go back’ to Led Zeppelin would be an artistic betrayal. Plant in thrall to world music, roots music, the blues, country, bluegrass, bedouin music – anything but rock. Plant… talking a lot of sense, to be honest.

And here’s The Curse Of Robert Plant. He’s the rock star we need right now and he doesn’t seem to realise it.

In fact, forget ‘stars’: rock music needs artists who are able to take the best of rock – the energy, the dynamics, the instrumentation, the performance – and infuse it with outside influences. Rock is stuck in a rut and Plant talks a good game.

The problem is, he talks about it like us old rockers aren’t with him already. Eastern music? Yeah, you did that on those Led Zeppelin albums we love. Folk? We love it – especially when Led Zeppelin does it. Blues? I mean, duh. C’mon.

The excesses? Well, yeah: we could all do without a few of those ‘baby-baby-baby’s. We don’t need another lyric about Frodo and his pals. And we get it: a 69 year old talking about the juice running down his leg takes on a whole different meaning.

And as far as performance goes, we know it can’t be the same. It wasn’t the same in 2007 – it was still amazing. Drop the keys. Choose the set wisely. It can be done with dignity.

John Paul Jones has made albums of big beat electronica, dabbled in world music, arranged strings for REM, and made a convincingly modern rock album with Them Crooked Vultures. If you want a collaborator, he’d be perfect. And there’s this guy, Jimmy something – great player, but also an astonishing producer with an unparalleled understanding of musical dynamics. Guess what he’s into: blues, rock’n’roll, eastern music, folk – just like you!

It’s a match made in heaven. You should meet up, knock about some ideas for a bit, see what you come up with. It’s Led Zeppelin’s 50th birthday next year. You could do a few shows, make a bit of money, make a whole of people happy, and still do the solo thing.

But don’t act like ‘rock’ or the rock audience are too conservative. We’re not. We don’t want a re-tred, we want our minds blown. Led Zeppelin made us that way.