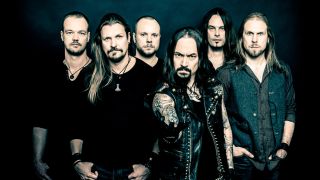 Amorphis are the enormously influential band that have never quite got the recognition they deserve – outside of their native Finland, anyway. They mixed clean singing with death growls before Fear Factory went global with Demanufacture, injected layering and texture into extremity while Emperor were still doing necro demos and messing around with capes, and played with folk melody at a time only a handful of other bands were doing it (Bathory and Skyclad, mainly – not even Ulver and Satyricon had got that far).

Not content with pioneering in that sense, they were one of the first Finnish bands to get noticed abroad – Sentenced, Impaled Nazarene and obviously Stratovarius being contemporaries – and are, arguably, almost entirely responsible for that Finnish folk metal thing that the metal public went collectively bonkers for in the mid- to late-noughties. Ask Finntroll, Ensiferum, Wintersun and the like to cite their inspirations, and the name Amorphis will unite them. And having inspired a new generation of bands, they evolved, changed and ended up doing something very different, making their best music in the time since singer Tomi Joutsen joined in 2005.

Despite being one of the most influential and accomplished bands to come from the world’s most metal nation, they have perhaps been discovered more through Turisas (and similar) fans going back than by anything else. Their seminal 1994 album Tales From The Thousand Lakes may have set the template for an entire sub-genre and inspired a generation of Finns to pick up guitars, but its importance is most popularly known for its influence.

“I’m pretty sure that there’s probably a lot of fans that got into Amorphis by listening to bands that were influenced by Amorphis,” acknowledges founder and guitarist Esa Holopainen. “A lot of times you see Finntroll or Ensiferum shirts at our shows, and we don’t have humppa (the Finnish polka folk metal is based on) beats! But I guess it’s the folkish feeling that they search for in our music as well. But I’m really happy if it serves that way as well, because normally it comes another way round.”

Not every band likes the music they inspire. It would be reasonable, for example, for Dimmu Borgir to look at the legion of derivative keyboard-drowned black metal that arose in the late 2000s with contempt – what the Abigail Williams’ of the world created was probably not what the Norwegians had in mind. But folk metal is not a derivative rip-off done badly, but a style in and of itself. Do Amorphis approve of what their music inspired?

“I keep it as an honour, personally,” says Esa. “I can’t say that I would listen to humppa metal at home, or play some of the albums of these bands, but I do like what they do. Wintersun are amazing at what they do, so are Finntroll, they’ve made the whole thing totally into their own [style]. All these bands – Turisas – they have their own thing, which I’m really happy about. If it was just one huge mass, like all this American [makes onomatopoeic breakdown sound] metal thing, where you have plenty of them and every band is playing the same thing… but all these Finnish bands are pretty unique, which I’m very happy about. And really honoured about, if it’s in anyway because of us that they’re doing it, that’s okay!”

it seems people don’t believe in anything these days

The “folk” element of Amorphis is one aspect of their identity only; there are strong strains of prog running through their keyboards, their guitar tone, and Tomi Joutsen’s powerful roars speak of their roots in Finland’s excellent death metal scene, and the absence of kilts or warpaint tells you immediately they aren’t a band of gimmicks. This does not mean their relationship with folk traditions are superficial, however. The band have used the Finnish national epic Kalevala as an inspiration going all the way back to Tales From The Thousand Lakes, and their relationship with their homeland is at the core of what they still do.

“The inspiration comes from Finland in general,” explains Tomi, talking specifically of their new album Under The Red Cloud. “Of course, there are lots of stories in Kalevala which are based on nature and things that are happening in nature, which we have in this album. But the stories are not taken straight from the Kalevala, it’s been only one inspiration. There’s some of the same themes on the album that are also in Kalevala, like, man is trying to find answers about why we are here, trying to seek God.”

“It’s an interesting subject and something in our heritage,” Esa says. “It’s interesting to realise that there have been religions and beliefs before any churches and Christianity took over in Finland. There was a strong belief. I guess it happened in all other countries as well; they all had things they believed. In Finland, nature was strongly involved, people believed in old forest spirits and different gods. All that is really fascinating, when you have old poetry and old texts about what people used to believe, how they used to live. We feel really connected to that time, that era, because the modern day, it seems people don’t believe in anything these days. It’s just straight, focused, working and living. It’s a very selfish world we’re living in, where you don’t know if there will be any generations after the [next] couple. I guess that’s why we are strongly connected to the old beliefs; you have to respect nature and your surroundings and other people.”

This connection to that time or era should not be misinterpreted as living in the past or a proclamation of heathen faith. It is a more nuanced perspective than that, that incorporates the landscape and cultural heritage growing up in Finland exposes people to, along with the impression that the world is fucked and getting more fucked all the time. Agree or disagree with the dystopian view of the future, in a world of ISIL and political unrest, it is a rather easier concept to understand than dedication to an arcane religion that has been mostly dead for a thousand years.

“In Finland we have this kind of history behind us, we have this great story that’s a really unique thing,” says Tomi. “It’s good to have roots, you know where you are coming from – that’s really important. But on the other hand, people – human beings – are always really stupid. In history and nowadays, we are making the same mistakes again. And I don’t know what’s going to happen.”

“Perhaps we want to live in our own nature bubble, not worrying too much about what’s happening outside. But you can’t ignore the fact that it’s not a good direction we are heading in,” Esa adds.

On a more positive note, Amorphis have the opportunity to show what they can do to a larger-than-used-to audience in London later this year. They, along with melodic extremists Arch Enemy, are set to support symphonic metal superstars Nightwish at Wembley Arena on December 19th. It’s far and away their biggest appearance on UK shores; considering their last two headline shows in London were at the Islington O2 Academy, which at a capacity of 800, is less than one fifteenth the size of Wembley’s 12,000 vastness. And while there is plenty of crunch and ferocity to Amorphis – Tomi’s fearsome growls especially – their rich and lilting melody should go down well with their compatriots’ fans. But given the size of the show, you wouldn’t blame them for a nervous twitch or two.

“Every show makes you a little bit nervous,” Esa admits. “I think that’s the mark of a good show. It’s a great honour to go on the tour, and I think it’s a really good package, there’s something for everyone. I guess people mostly come to see Nightwish, but it’s a good chance for us. I can’t think now what the feelings might be, but pretty scary!”

The band’s singer is a touch more blasé, however.

“It’s not the first time we are playing at a big venue, so I think it’s not a huge thing for us,” says Tomi. “Of course it’s a great place and it’s going to be interesting, but we know the guys from Nightwish, and we are pretty sure we won’t have problems touring with them. Sometimes [on other tours] there might be ego fights or fights about money or something like this; that won’t happen when we are touring with Nightwish. That’s one reason why I’m not nervous, because everything will be really smooth with them. But of course, playing that arena, it’s going to be a huge thing, but we have played Wacken, for example, when there are 40,000 people, so it’s not the first time. We have done TV live things. I think the most scary thing is to play live on radio – that’s horrible!”

In other words, don’t expect bum notes due to fear.

Amorphis release Under The Red Cloud on September 4th via Nuclear Blast, and support Nightwish at Wembley SSE Arena on 19th December.