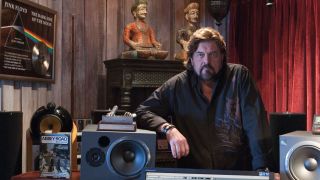 The Turn Of A Friendly Card was the fifth album by the Alan Parsons Project, released in 1980. We caught up with Parson’s at his spiritual home of Abbey Road Studios tot all about it.

“It was the album that gave us some hits,” recalls Parsons of The Turn Of A Friendly Card, the 35th Anniversary double-CD edition of which has just been released on Sony Music. It was also the first album on which Parson’s collaborator in the Alan Parsons Project, the late Eric Wooolfson, got to lend his vocals to an album, singing both Nothing Left To Lose and the hit ballad Time. “I’m never allowed to forget that it was a mistake that I forbade him from singing up to that point,” laughs Parsons.

Parsons was recently in town to give a series of talks at Abbey Road studios, where he had previously worked on The Beatles Abbey Road and Let It Be and engineered Pink Floyd’s seminal The Dark Side Of The Moon album, and would later become head of the studios for EMI Records.