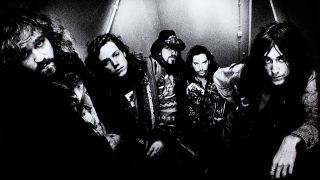 They said it would never happen. They said the rancour ran too deep. But last November it happened: The Black Crowes put their differences aside and announced  they were reforming for a 2020 tour. After years on unbrotherly infighting, The Robinsons were back. And being careful.

"We just want to start with a clean slate," Chris Robinson told Classic Rock. "I’m not putting the blame on anyone else, I’m responsible for my own negative interactions with the rest of the band. But we didn’t want to trigger anything. One little thing, and you’re back to fighting."

The band's reformation tour will see them play 1990's debut Shake Yer Money Maker  album in full, plus "all the hits." But these are the 20 songs that built the band.

The song that introduced the world to The Black Crowes: bellbottomed barroom boogie that let the Brothers Robinson live out their Faces fantasies. Through the Aquanet fog of hair metal, the greatest American rock’n’roll band of the 90s had emerged.

Chris Robinson pushed back against covering an Otis Redding classic, but he was on the wrong side of history: Hard To Handle was the Crowes’ first hit, and they were off to the races.

New guitarist Marc Ford helped kick the Crowes up several gears on The Southern Harmony And Musical Companion, as embodied by its instant-classic first single, a not-so-sneaky pro-pot anthem.

On Southern Harmony, the rockers rocked more and their ballads were more wrenching – none more than Thorn In My Pride, in which an increasingly feverish Chris Robinson urges an unnamed lover to ‘Let your love light shine on me’.

The greatest song the Crowes ever wrote: a euphoric rush of secular gospel that spirals up and up until it’s flying with the eagles. The point where the Crowes became the equals of the bands they were always compared to.

The Amorica album was where things got funky and strange. Its hip-swaying lead single plastered on the wah-wah and found a never-better Chris Robinson exhorting to the heavens like a sidewalk preacher.

Sadness and longing wrapped up in sweetness and slide guitar: Wiser Time’s on-through-the-night heartbreak soars high above its country-rock roots to take its place among the Crowes’ most stirring numbers.

The dark and psychedelic Three Snakes And One Charm is Chris Robinson’s favourite Crowes album. Lift One Mirror…’s southern rock lid and you’re peering into a Wonderland where everyone’s tripping balls.

Snaking and shaking like a Krishna parade, the hallucinogenic Eastern-tinged mysticism of How Much For Your Wings finds the Robinsons trading vocals in a rare instance of brotherly harmony. Peak ‘hippie Crowes’, and proud of it.

Just as the wider public was losing interest, the Crowes made their most direct album since the debut with By Your Side. Its adrenalised opening track plugged its fingers into the mains and flipped the switch.

Barely had Go Faster screeched to a halt than By Your Side’s second track kicked into life, ramping things up even further. Chris whoops and whelps, and a fearsome harmonica solo helps push things to the finish line.

The Crowes were an odd fit to back Jimmy Page – Zep’s grandstanding machismo wasn’t what they were about. But they give it their all on this live version of the dank, druggy Presence chestnut.

Lions is the least loved Crowes album, but it’s no lost cause. Soul Singing finds Chris Robinson stoned immaculate and pushing waves of euphoria out into the universe.

Decisive proof that no one writes a better broken-down ballad than The Black Crowes. Lay It On Me sees the eldest Robinson offering solace to his own crooked self. The solo that caps it is the finest of their career.

Pink Floyd meets the Allmans on this shimmering deep cut. Originally recorded during the sessions for 1993’s abandoned Tall, it didn’t see the light of day until 2006’s The Lost Crowes.

Another lost gem, fished out from the sessions for 1997’s aborted Band album. This was the Crowes at their most blue collar rock’n’roll, a driving song for dusty backroads.

Goodbye Daughters Of The Revolution (2008)

Warpaint was a return to the Crowes’ roots, and its opening track piled up the good-time vibes while Chris Robinson urged personal revolution. “The whole idea is the paranoid utopian blues,” he explained gnomically.

'It’s too late to play it safe/So let’s let it ride,’ sang Chris Robinson towards the end of Warpaint’s slow-burning highlight, summing up his band’s career.

Recorded live in front of an audience at Levon Helm’s barn, the final Crowes album Before The Frost… Until The Freeze was more inspired in concept than execution. This backwoods shakedown shows there was still gas in the tank.

A timeless quality spills from the high point of the acoustic half of …Until The Freeze – except the lullaby-like Greenhorn reaches further back than the early 70s, evoking the Great American Songbook of the 40s and 50s.