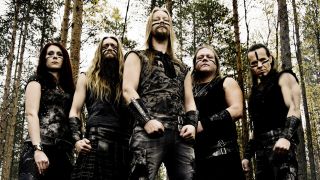 “Ensiferum’s music is easy to relate to,” says Ensiferum bassist and vocalist Sami Hinkka. If it was too focused on Finnish mythology, it might be hard for people in [for example] South America to relate to, but the way we write – especially lyrics – is easy to relate to. And, come on, who doesn’t like heroic stuff? That’s what I always tell people. I’m just a geek that saw Conan The Barbarian too many times.”

Ensiferum are twenty years old. That’s solid going for any band, but when you consider where they sit in the history of heavy metal, it’s rather more impressive. When it first appeared, folk metal was written off by a lot of heavy metal as a fad, a flash in the pan, a novelty filling a short-lived void. Ensiferum were tarred as a party band for those kids who thought Limp Bizkit and Blink 182 were about as appealing as a pube in an omelette. They were a gimmick, a stylistic veer in the road caused by a combination of circumstances that created a vacuum.

Above, Sami suggests one reason Ensiferum proved their doubters wrong after they broke in the mid-2000s. The rest of the reasons heavy metal fans went for the Finns are fairly easy to explain, when the context of the time is stated: there was a comparative absence of fun in heavy metal. The New Wave Of American Metal was SRS BSNS, power metal was shite, death metal had decided the lesson to learn from Decapitated was being technical rather than hearing how fun the Poles were, black metal was either diverging into esoteric underground filth or too busy trying to rip off Dimmu Borgir, and the thrash revival (then in its infancy) may have been fun but could not quite capture the imagination in a lasting way.

So when the kilted folksters swept into metal’s consciousness with ace songs about heroism and bravery, proving you could be upbeat without being lightweight, people listened. A decade and more later, they are one of the few bands who can get a London crowd queuing round the block two hours before doors, and make them go stark raving bonkers once they’re inside.

“We are really privileged to be in this situation,” says Sami. “When you start a band, it’s always about creating something with good people. And that’s very much present in Ensiferum; when we compose new stuff, we try to be those teenagers in their own rehearsal room, writing stuff that sounds good to us, not thinking about what genre we are categorised to too much – that’s why you end up having disco on the album!”

The disco song (which also dips into country music, just to really piss off the purists) is Two Of Spades from latest record One Man Army, the band’s sixth, and one that sees them exploring new territory while still retaining much of that epic sound that they helped popularise. It is curious that a band partially responsible for a style (an upbeat mixture of folk music, and various strains of metal – from the extreme to the very melodic) becoming an integral part of the modern metal tapestry are willing to expand their horizons. Apparently, if you’re Ensiferum, familiarity does not breed contempt.

“We’ve had this line-up for so long – we’ve done hundreds and hundreds of shows together and travelled a lot together, so we understand each other much better nowadays – so when somebody comes with an idea, ‘Oh I’ve had this weird idea of a flute doing something with a weird drum beat,’ nowadays everyone says, ‘OK, let’s try it out,’ instead of, ‘that sounds weird.’ Everybody is more open-minded, and respects and trusts each other much more,” Sami explains.

The long-standing line-up he is referring to has only seen one change in a decade. It is hardly a stretch to imagine that the consistency of the band, with a back catalogue with no weak link, is in part due to stability. This lack of drama helped them play their part in defining that Finnish folk metal sound (along with Korpiklaani, Turisas and Finntroll) that has become one of heavy metal’s most loyally followed niches. After debut album Ensiferum and 2004 sophomore record Iron, 2007’s Victory Songs and it’s follow-up From Afar in 2009 were landmark moments for folk metal and Ensiferum both. They were clear indicators that neither were going to vanish once the sheen of newness wore off, and that the quality of songs needed to sustain them were there – and that people would embrace them.

The elephant in the room is that this stability came after a massive upheaval in the band’s line-up. Just as the band were about to find success after the release of Iron, three of the band’s members left – most prominently, one Jari Mäenpää, the band’s vocalist and guitarist, now better known as the creative mastermind of Wintersun.

“It was necessary, because if those changes wouldn’t have happened, Ensiferum wouldn’t be here now,” says Sami. “Our dear friend Jari, why he was… ‘kicked out’ sounds so rude, but that’s pretty much how it happened. He left, he was kicked out because he wanted to do Wintersun, and you know how it has been. If he’d stayed in Ensiferum, I don’t think we would have made any albums, or all the tours – no chance.”

The “you know how it has been” is a reference to the glacially slow pace at which Wintersun have operated. While their two releases, Wintersun and Time I, are absolutely excellent records that sound quite unlike any other band in heavy metal before or since, they are the only two records in the course of the last 11 years, and the tours and festival appearances are comparatively sparse. By contrast, Ensiferum have toured consistently and got an album out every two to three years. If you are under the impression this would turn into a Finnish version of Dave Mustaine getting kicked out of Metallica and founding Megadeth to stick it to them, however, think again.

“Finland is so small, and everybody is friends together – it’s not like a competition at all,” says Sami, cheerfully but firmly. “So me and Markus are going to do backing vocals on the new Wintersun album. Maybe people like more drama. I think everybody should just be happy. Now all the band members are happy in every band, everybody can do the stuff that they want. Of course I hope that Wintersun get Time II out and they get on tour, because I saw them on 70,000 Tons Of Metal, and they are a good live band, extremely good musicians, and they deserve good tours. It would be nice to tour with them – we’ve talked about that for many years. We’ll kick Jari’s ass to get Time II out.”

One difference between the two bands beyond the music (and the pace of work) is visual. Wintersun look like metal dudes; Ensiferum look like pagan warriors. Ensiferum are as responsible as anyone for the popularisation of warpaint in metal (with the possible exception in Britain of Turisas, where the impact of their 2007 Boney M cover saw red-and-black facepaint become an annual sight at Bloodstock – irrespective of whether Turisas were actually playing). The band helped make it acceptable to have a visual aspect to your metal band without looking like a panda, running around in the woods breathing fire, or shrieking unintelligibly about devil worship.

For better or worse, it is now impossible to think of Ensiferum without at least one black stripe of facepaint in mind, or without imagining shields, axes, swords, fur coats, chain mail or kilts. In fact, if you show a metalhead a picture of a metal band with black facepaint brandishing weapons, they’ll probably guess it’s Ensiferum (unless it’s Immortal, obviously). Sami is able to acknowledge the double-edge to this sword, admitting there must be a few potential fans who were scared off by the image, just as some confirmed Ensiferum fans will have listened to them for the first time because swords in metal rule. But that doesn’t appear to be the most significant part of it for him.

“I like that it’s part of the ritual before the show, getting into the mood,” he says. “For me, live shows are really devotional things; I want to believe what I see. So I think you have to represent what you are actually about. So it would be weird if a black metal band played in flowered shorts and Hawaiian shirts. You need to have a certain kind of dramatic, theatrical aspect to it. But on the other hand, nowadays, I actually don’t think Ensiferum is that much of a visual band, if you look at other bands of the genre, with big furs and swords on stage. It’s just a few hippies with stripes on their faces! But I think it’s cool that many people come to our show with the warpaint, go to the toilets and put the stripes on, so you don’t need to bathe in blood to feel connected.”