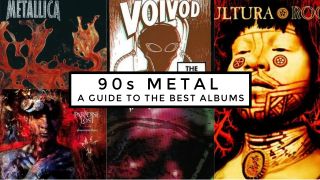 Music doesn’t stand still, it’s constantly evolving. And just like the other decades that came before it, the 1990s changed the face of rock music forever. The arrival of grunge and, later in the decade, nu-metal turned everything on its head, bringing fresh values that made their way into the metal world. Suddenly, for example, it seemed that everyone was de-tuning, and at the same time becoming more sombre. But even though it was the new regime that dominated the headlines, the old school was far from finished. In fact some of those bands who first came to prominence in the 80s actually found their feet in the 90s.

The way in which the established ‘old guard’ responded to the challenge of the fresh young hotshots could be divided into two distinct areas. Firstly, there were those who carried on as if nothing had changed. Their development was linear, unphased by the impact of Korn, Nirvana et al, and they would have taken the same musical path whatever was happening around them.

On the other hand, there were those who acknowledged the innovations, saw which way the wind of change was blowing and trimmed their sails to go with it. This re-invigorated some of the sounds that had been starting to sound a little stale by the time, and gave fresh hope to a generation that may have just faded away had it not been for the revolution taking place.

Thankfully, the traditional metal values also inspired a whole new influx of musicians who would take the music extremities of the 80s even further and in many different directions. In this respect, black metal finally came into its own. Once merely a cellar-dwelling offspring of death and thrash, now it reached for its own trademarks, and became a beast with a focus and rage that no longer owed much to what it started out as. The likes of Cradle Of Filth, Darkthrone and Emperor were so fast, loud and blasphemous that even Slayer die-hards blanched at those bands’ confrontational cheek.

On a more sedate aspect, Brazilians Sepultura were experimenting with tribal sounds, while Voivod held a more psychedelic muse. And, thanks to Paradise Lost and their ilk, goth metal came of age.

The 90s was a period during which traditional metal opened up its hitherto padlocked gates to so much that was new and different not to dilute the impact, but rather to ensure that metal had a future.

Even those who refused to bow and evolve were, oddly, aided by a new attitude abroad on the polydecibel plains. Against the prevailing, howling trends, metal lived on.

This Brazilian band had always been prepared to try new ideas, and here they found their true voice with a record that took as much from the indigenous tribal rhythms of Brazil as it did from extreme metal. And the result was stunning. Songs like Roots, Bloody Roots, Breed Apart and Ratamahatta are among the best examples of how the band took metal into exotic new areas.

It's a shame that Max Cavalera left the band before this pioneering work came to fruition. Roots is an album of such diversity, range and acuity that it is possibly the most challenging and satisfying metal release of the decade.View Deal

Cowboys From Hell, released in 1990, may have set the tone for Pantera's influence, but Vulgar Display Of Power was arguably the band's finest moment. It had everything – and set up vocalist Phil Anselmo and co. as the natural successors to Metallica. Every song breathed menace and pungent fumes, with Mouth For War, Walk and Fucking Hostile lodged firmly among the greatest anthems of the era.

In many ways this album is the bridge between 80s thrash and nu-metal. Did the late Dimebag ever play more storming guitar than he did here? Has Anselmo ever roared with greater impact?View Deal

Just when it seemed that thrash was never going to regenerate, along came Robert Flynn and the rest of these Bay Area mentalists, not only reviving memories of past thrash glories but also throwing down the gauntlet to those who believed this sort of thing to be passé and pasty.

The band set a blistering pace with Old, Davidian and I'm Your God Now – one that even they themselves found tough to maintain as the decade wore down their focus. But for that brief flicker in 1994 this was state-of-the-art metal, and it marked out Machine Head as one of the most crucial bands of the 90s. It still blisters the mind.View Deal

Anthrax had made their impact as innovators in the 80s, but were sounding horribly dated by the time vocalist Joey Belladonna was fired in 1991. Desperate for some renewed cred, they brought in Armored Saint's John Bush as his replacement. And, against all the odds, came up with one of the strongest albums of their career. Modern, cohesive, brutal yet melodic, and stuffed with strong songs – Only, Room For One More, Black Lodge, Hy Pro Glo – it was the start of a glorious new era. Anthrax were the only one of the Big Four who truly adapted to the demands of the new decade.View Deal

No messing here. These unique Canadian metalheads took a further turn towards warp-factor psychedelia on this, the album that finally convinced sceptics that Voivod were among the most forward-thinking bands on the planet.

While their cover of The Nile Song underscored the Pink Floyd influence, the band relished their experimental metal on equally good songs like Fix My Heart and Moonbeam Rider. Far removed from the electro-thrash turbulence that marked their slightly comic-book formative years, The Outer Limits became one of the most influential metal-related records of the time. View Deal

This is where modern goth metal really started, with the dour Yorkshire band tearing up the rule book, and in the process creating a style that matched extreme metal with a darkness that was more inspired by goth-related atmospherics than by horror movies. The band's genius lay in allowing their development to take flight. Nothing here is forced, it all sound like their next evolutionary stage. The Last Time and Forever Failure probably sound so familiar today because so many other bands have copied the blueprint over the last decade. But you never beat originals, and Paradise Lost were in a league of their own in 1995.View Deal

So many regard this album as one of the reasons why Euro underground metal enjoyed a glorious period in the 1990s. The combination of ultra-heavy riffs and grinding rhythms gave these Swedes a vicious, viscous intensity that drove tracks like Under A Serpent Sun, Suicide Nation, Nausea and the title track.

Many now regard this cult record as one of the most crucial influences on the renaissance enjoyed by extreme metal over the past few years. The twin guitars amid sheer velocity has proved to be a benchmark for the likes of Lamb Of God and Shadows Fall. This album is European Reign In Blood.View Deal

Cradle Of Filth - The Principles Of Evil Made Flesh (Cacophonous, 1994)

This was the debut album from the Suffolk cod-Satanists, and it immediately put Cradle Of Filth among the vanguard of the growing black metal breed. It might sound ultra-primitive, and even a little clichéd, these days, but the band were already showing a musical boldness that was to lead to even greater heights. The Forest Whispers My Name and The Black Goddess Rises were early Cradle classics, as the band combined a snarling, dark rasp with some surprising melodic touches.

The first all-new Slayer album of the 90s – an occasion in itself – came four years after Seasons In The Abyss. And even if it didn't have the impact of Reign In Blood or South Of Heaven, that shouldn't detract from the fact that the band were still more than capable of stomping most of the young pretenders into dust. The high pace of Killing Fields and Sex, Murder, Art are matched by the more considered approach of Dittohead.

This is Slayer chained to the past, yet stretching out towards a more varied, dare one say mature, future. The best album from the band during a particularly patchy decade.View Deal

Never ones to bother with expectations, Metallica followed the vast success of the 'Black' album with a record that sees them trying a few different tricks. The band's long-established trademarks of heavy, epic tunfulness are still there in places, but this time, on tracks like The House That Jack Built and Bleeding Me, Metallica allow themselves the luxury of a little self-indulgence. But they could still pistol-whip – proved by Ain't My Bitch, 2x4 and King Nothing.

Had they gone soft? No. They just knew you can't stand still – unless you're anxious to be swallowed up by the quicksand of public opinions.View Deal