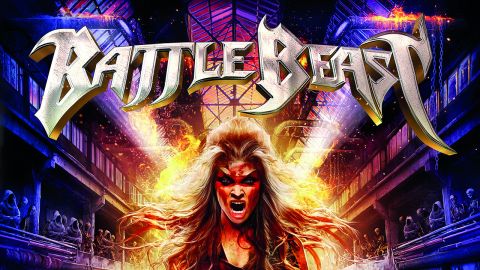 Over the course of a decade and various lineup changes, Battle Beast’s sound has morphed from seething heavy metal on debut Steel into a full-on, Euro-powermeets- 80s-glam assault that nods as much to Nightwish and Blind Guardian as it does Tygers Of Pan Tang and Accept.

During the writing sessions for Bringer Of Pain, main songwriter and guitarist Anton Kabanen left the band, but undeterred, the Finns’ fourth album finds them firing on all cylinders and displaying their clichés unapologetically. This is a huge step forward from 2015’s Unholy Savior, packed with chrome-plated, overblown musicianship, extravagant vocals from warrior chanteuse Noora Louhimo and massive, catchy choruses.

The over-the-top stadium anthemia of Straight To The Heart is the most raging opener BB have produced to date, followed with righteous warmongering on We Will Fight and a gloriously synth-laden King For A Day. The rampantly silly Bastard Son Of Odin, though, is the cheese-on-toast highlight that should have any self-respecting metal fan punching the air with glee.