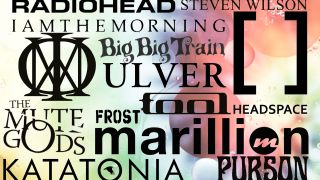 Was 2015 a better year for prog than 2014? And will 2016 be a better year than both of those? We’ve been gazing into our progtastic crystal ball to see what prog goodies are coming your way in the next twelve months…

The band’s second album, to be released on February 26 by InsideOut, is conceptual. While their 2012 debut, I Am Anonymous, dealt with the role of the individual in society, with All That You Fear Is Gone (the title of the second Headspace album), they concentrate on how groups put pressure on people to confirm and fit in. Vocalist Damian Wilson developed the concept. The one change in the band’s line-up since the first record comes on drums, where Adam Falkner has replaced Richard Brooks.

As usual with this enigmatic band, there’s very little info available on what would be the follow-up to 2006’s 10,000 Days. Tool did preview one new song, an instrumental which has the working title of Descending when they played at the Monster Mash Festival in Arizona on Halloween, but all that can be said right now, is that work is continuing on the album, with guitarist Adam Jones recently revealing the process is going very well. While it seems likely the album will come out at some point in 2016, nothing can be taken for granted with Tool!

The band are currently working on what will be their 18th studio album, which they are offering for pre-order through PledgeMusic. A spring release is expected, with the final recording sessions being scheduled to happen in February at Peter Gabriel’s Real World Studios. While no song titles are yet confirmed, among those being considered for inclusion are The Leavers, El Dorado, Class, Things Buried, New Kings and Melt Our Guns. But right now, these are still working titles.

The second album from Purson is to be titled Desire’s Magic Theatre. As with debut album The Circle And The Blue Door (released in 2013), all the songs were composed by Rosalie Cunningham, who also plays most of the instruments and also produced/mixed the album. While not a concept record, this is a variety show in song, inspired by Sgt. Pepper’s Lonely Hearts Club Band. There will be 10 tracks in all, with a running time of around 50 minutes. The album is to be released on March 25 by Spinefarm/Machine Elf.

The band are busy working on the new album, which much of the recording being done at Strongroom Studios in London. As yet untitled, the album will be their third and should be finished by February 14. Assuming they meet this deadline, mainman Jem Godfrey is confident that the album will be out through Insideout in the summer, to coincide with a recently announced UK tour from Frost*. According to Godfrey, the album should sound more like Alice In Chains than Bon Jovi!

The five-piece have just finished recording their second album, the follow up to 2014’s Illusory Blues. This has been done at Orgone Studios in London, and produced by the band’s drummer Jaime Gomez Arellano, who also did the mix. The album is to be called Threnodies and released by InsideOut on April 22.

The trio of Nick Beggs, Marco Minnemann and Roger King are to release their debut album, Do Nothing Till You Hear From Me, through InsideOut on January 22. It is described by Beggs as “a disgruntled rant at the dystopia we’ve created for ourselves and our children.” They have already posted the video for Feed The Troll and will shortly post one for another of the 11 tracks on the album, namely Father Daughter. There’s also a 4k 360 degrees version of the video for the title track

There will be a new solo album from Rabin this year. He has been working on the follow up to 2012’s Jacaranda since 2014, but this has been interrupted by his commitments as a film score composer. But at the end of last year, he finally seems to have found the time to concentrate fully on finishing work on the record. No release date has yet been confirmed, nor has a title. But what Rabin has said is it will be a vocal album.

The Norwegians release the album ATGCLVLSSCAP through new label House of Mythology. This explores Ulver’s fascination with krautrock and 70s electronica in general, being influenced by the likes of Amon Duul II, Kraftwerk and Neu!. There’s also a nod to famed film score composer Bernard Hermann.

The band have just started to record their new album, the first since Magnolia in 2014. So far there’s very little info on the record, however it is expected to be released in May. Once more it will be on the Kscope label.

The band ended 2015 by announcing the formation of a new company called Dawn Chorus LLP. And, although, there has been no info as yet on the next Radiohead album, there is an expectation this announcement will be followed shortly by news on the album. The band took similar action prior to putting out their last two albums. In July 2007, they announced the formation of the Xurbia Xendless Ltd and put out the In Rainbows album in October the same year. And in December 2010, they formed Ticker Tape Ltd, with the release of King Of Limbs in February 2011. The band are known to have been busy in the studio, and one song that is set to be included on the record when it finally comes out is Dawn Chorus. Radiohead also recorded a song for the James Bond movie Spectre, which wasn’t used, but this might be put on the album.

The former Mansun man has finally finished work on his first solo album Spooky Action. He expects to announce full details soon. Draper says the album is rather like he’s produced himself from the past. He talks about everything that happened to him during his time with Mansun on a set of 15 songs. Draper began writing these in 2003, and came up with 19 tracks in all, from he has come with the final selection for the album. Some of it, admits Draper, will be rather dark.

The Russian duo have just finished work on their new album. It includes guest appearances from Porcupine Tree pair Gavin Harrison and Colin Edwin, and will be released by Kscope later in the year. The band financed the recording sessions through a crowdfunding campaign. As on previous album Belighted, iamthemorning have been working with Marcel van Limbeek and Gianluca Capachionne. The band describe the conceptual album as being rather grim.

The Swedes have been working in Studio Grondahl in Stockholm with engineer Karl Daniel Lidén on their new album. This will be the first to feature new drummer Daniel ‘Mojjo’ Moilanen. There will also be a one or two guest appearances on the record. So far, there are no oter details available on what will be the follow up to 2012’s Dead End Kings. But fans can expect this to be released later in 2016 through Peaceville.

The Italian band are currently working on what will be their sixth studio album. The aim is to have this finished in the next month so, ready for release later in the year through Kscope. The band say the album will be stark and unsettling, on which they will explore the origins of feelings such as love and fear. They have posted the intro to one track, Feelings Are Not The Truth, on their website, www.nosound.net

The band will release Stone And Steel on March 7. This is a live in the studio DVD. And Big Big Train are currently working on their new album, which is to be titled Folklore. This will have elements of folk, and may also feature one or two songs about London. So far, no release date has been confirmed, but Folklore is expected to come out early in the year.

The second album from what is effectively John Mitchell’s brainchild is to be called The Big Dream. While the 2015 debut Please Come Home saw central character The Astronaut in space, this time he’s on terra firma, but locked into the imaginings of his own mind. Mitchell insists this is not conceptual, but there is a theme running through the tracks,as just outlined. One difference to the first album is that while Mitchell had a plethora of guests on Please Come Home, this time he has a core band, the same one that played with him at The Scala in London just before Christmas. The album will come out through InsideOut, but there’s no confirmed release date as yet.

The band have just signed a new deal with Bad Elephant Music, and they’ll be releasing new album Rise To The Order during the first quarter of this year; no definite date has yet been set. The album will gave eight tracks in all, and if you want to get an idea of what to expect, then you can listen to one song, My Energy below…

Wilson will be releasing an album titled 4 ½ through Kscope on January 22. However, it’s probably not strictly accurate to call this a new record. Four of the songs originate from the recording sessions for Hand.Cannot.Erase., while one goes back to the sessions for The Raven That Refused To Sing. And Don’t Hate Me is a new version of the Porcupine Tree track, combining a live recording done on Wilson’s recent European tour, with additional studio work. So, in effect 4 ½ is something of a bridge between Hand.Cannot.Erase and his brand new album.

The project featuring Justin Greaves of Crippled Black Phoenix and Belinda Kordic are to release their second album through Kscope on April 22. The duo have been in the studio recently getting all the material ready. But so far, there are few other details on the album, however fans can expect a similar approach to that on debut album The Fall, released in 2014.

The band’s new album is called The Astonishing, and will feature close to two-and-a-half hours of music. Released on January 29 by Roadrunner, this is the first concept album from the band since 1999’s Metropolis Pt. 2: Scenes From A Memory, and is based on a storyline developed by guitarist John Petrucci, who also produced it. Set 300 years in the future, it tells of s time when governments have total control over people, and only machines create music. But one person in a remote village starts to compose, and that lights the fire for rebellion. The album has orchestration provided by the award winning David Campbell.