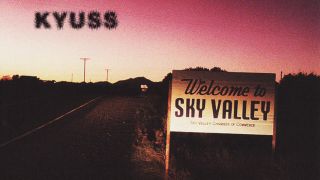 It’s been two decades since the release of Kyuss’ seminal third studio record Welcome To Sky Valley, an album which became the very blueprint for the 90s stoner rock movement. We caught up with singer John Garcia to talk about its impact...

It’s been 20 years! What do you remember about making the record?

“Wow! I remember that it was really Josh Homme’s baby. This was something I knew he was on a hardcore, pipe-hittin’ mission for. He had a really direct vision with this record and very specific with what he wanted from me. I give credit where credit is due!”

“That was the last record where I got a chance to see Josh and Brant Bjork [drums] work together. Those two collectively as a creative team, they were something else. If they would have put aside their differences and just worked together… When it was great, I’d be looking from the outside like, ‘Holy fuck, just show me. Tell me where you want me to go and I’ll be there…’ Josh is a master at what he does. When he came to me with Supa Scoopa And Mighty Scoop or Brant came to me with Whitewater, I’d fall in love with it and make it my own. I’m not gonna sell myself short, either! I’d own it. I can guarantee you the way Josh sang Supa Scoop is not the way I sang it! But Sky Valley, I knew it was a special record for Josh. It was his baby. And I think still to this day, that’s his favourite. It’s the one he was most involved with and I’d say Supa Scoopa is my favourite track off it – what a fun song to sing!”

Did you have any idea these records would become the very blueprint for a movement of heavy psychedelic rock?

“It’s weird cos it skipped a generation. Stoner rock or desert rock, whatever you wanna call it… some people look at our records as the nucleus or genesis of it. But actually in reality, there was stuff going on long fuckin’ before me, Josh or Brant were around. Bands like Leaf Hound – surely they had something to do with this. How about Buffalo? Or Cactus? Or some small band called Black Sabbath, perhaps? It skipped a generation going through this disco thing and bad 80s thing, then it was us, Monster Magnet, Fu Manchu… bands that wanted to get back to basics and simplify things. I look at it as an honour that people associate my former band with that. I’ve embraced and loved it, but we weren’t the fuckin’ creators. Josh or Brant might have a different view. But to me, this was all going on long before I was out of the womb. It’s a trip to think about people growing up and listening to Kyuss, though if any readers don’t know who Buffalo or Cactus or Leaf Hound are… they should really check em out! That’s the nucleus of what I started out on.”

“There’s nothing worse than false modesty, but I’m appreciative of the support from the fans. I try to keep my on the ball and the ball to me is being a good Dad and a good husband. But I’m stunned to be able to do this. My wife runs Palm Springs Animal Hospital so if ever wanna go back, there’s a spot next to her there… right where we met! That’s what I mean about keeping my eye on the ball and not being another prima donna wannabe rock star, which I’ve never been. Egyptian cotton sheets, not that I have any, don’t mean a fucking thing. When you’re laying on the fucking slab and it’s time for you to go… it goes back to those moments with your family.”

Stoner rock – is it a lazy term?

“I wouldn’t say so. When my wife’s grandmother asked me what kinda music I play, what was I going to say? I felt a little uncomfortable there! Call it stoner rock, call it desert rock, I call it rock ’n’ roll. I’ve learned to really embrace the term. I’ll go, ‘Man – you want stoner rock? You’re gonna get stoner rock tonight right here! Everybody fuckin’ light up and pass one up to me too! Let’s all get stoned!’”

Do you hit the weed much these days?

“It’s been a while. Maybe three weeks ago? These days I’ll take one hit and, boy, I clam up. My voice goes all funny and I shut the fuck up ha ha! You know what I really love to do? When grandma has the kids, we’ll either go out and drink some martinis listening to Frank Sinatra covers all night long, or we’ll stay at home, twist one up and have a Led Zeppelin night. Or Beatles night. Or – as it is most of the time – Cult night. We’ll just pull out all the vinyl, open the windows and talk about what we hear. That’s always fun! There’s nothing wrong with a little recreation.”

What are the chances of a full Kyuss reunion? Are the odds any better?